Although crowds were extremely sparse at this weekend’s Freedom March, at least one name offered her support to the Washington, D.C. ex-gay rally: conservative blogger Elizabeth Johnston.

The self-proclaimed “Activist Mommy” delivered a half-hour speech at the annual event organized by the Virginia-based group Voice of the Voiceless. In the rambling address, Johnston called herself an “ally,” “advocate,” and “friend” to “one of the most marginalized and censored groups of individuals in our cultureand that is the ex-homosexuals.”

“I am here for one reason, and that is to say amen to these brave brothers and sisters who are misunderstood and hated like no other,” she told the estimated 50 people gathered to hear her speak. 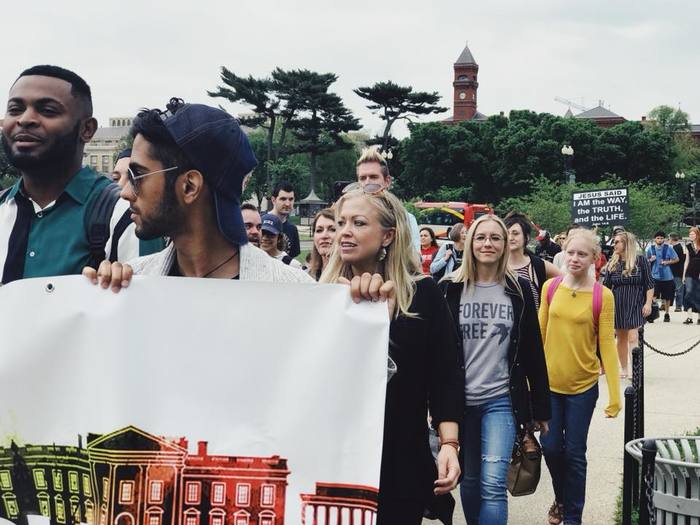 “We should not be teachingperiodhow to have sex,” she urged in a two-minute video, while piles of the publication burn in the background.

In April, Johnston urged conservatives enraged about LGBTQ-inclusive sexual education curricula to pull their children out of school for a national “Sex Ed Sit-Out.” She claimed that queer and trans advocates are “sneaking into schools” to “rape the minds of children.”

But this weekend Johnston preached a different agenda: She took aim at legislative attempts to ban conversion therapy, referring to a bill currently under consideration in California as “un-American.”

“Now if California wants to be a Communist state, I’m sure we would all be happy to help them secede from the union, right, and enjoy their totalitarian future,” she told the smattering of people gathered at the Sylvan Theatre next to the Washington Monument. “But last time I checked, this is Americawe have something called the First Amendment. […] None of us should sit by idly and allow this to take place.”

In April, California introduced the nation’s most progressive piece of legislation prohibiting the discredited “gay cure” treatment. AB 2943 would classify orientation change efforts as “fraud,” whether the patient is a minor or an adult.

Although conversion therapy has been banned in 10 states (and D.C.), most of these bills apply solely to LGBTQ youth under the age of 18.

Johnston particularly singled out Assemblymember Evan Low, the openly gay legislator who introduced AB 2943. Noting that Low had his “hair slicked back” while the lawmaker addressed the California legislature, the keynote speaker claimed he assured colleagues the bill would “not limit free speech.”

“He’s lying and he knows it,” Johnston responded.

“[Low] said the law must be passed because he grew up having people tell him that he needed to change,” she continued. “He said he didn’t need to change anything about himself. In short, Evan wants people to be prevented by law from saying things that make him feel uncomfortable.”

But as the American Psychiatric Association notes, the issue isn’t that conversion therapy makes LGBTQ people “uncomfortable.” It’s that individuals who are subjected to the treatment frequently experience suicidal ideation as a result.

“The potential risks of reparative therapy are great, including depression, anxiety and self-destructive behavior, since therapist alignment with societal prejudices against homosexuality may reinforce self-hatred already experienced by the patient,” the group states in a position paper on the practice.

“Many patients who have undergone reparative therapy relate that they were inaccurately told that homosexuals are lonely, unhappy individuals who never achieve acceptance or satisfaction,” the APA adds.

In a statement to INTO, Low responded that Johnston’s criticism of California’s conversion therapy ban is inaccurate.

“We have seen statements desperately trying to spread misinformation about a bill that is truly narrow in scope,” the assemblymember claimed. “This bill simply seeks to classify conversion therapy, a practice discredited by the medical community, as a fraudulent practice under the Consumer Legal Remedies Act. This bill would in no way ban the Bible or limit anyone’s free speech.”

“I will continue to defend free speech, including Ms. Johnston’s right to spread her false beliefs about the bill,” Low added. 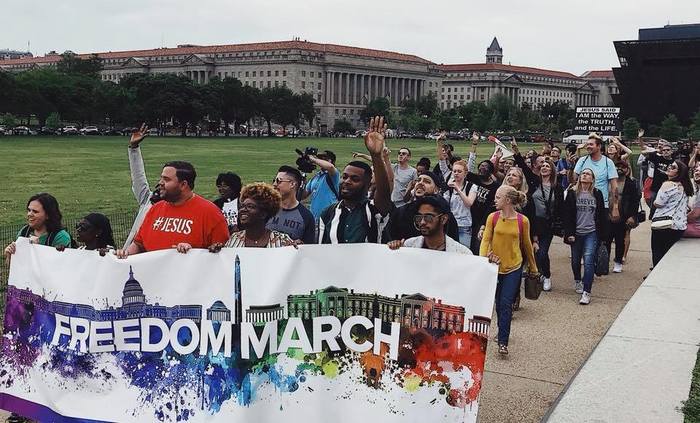 “For too long, sham therapists have scammed LGBTQ Californians out of their money by falsely claiming to be able to change a person’s sexual orientation or gender identity,” Garrett-Pate told INTO. “We’re proud of the bipartisan support we’ve received and look forward to passing AB 2943 and helping to protect LGBTQ Californians from these dangerous, fraudulent practices.”

But conversion therapy bans were just one of the myriad topics Johnston covered in her extremely wide-ranging speech.

The blogger also criticized schools who allow trans and gender non-conforming youth to self-identify their gender, complained about conservatives being forced to “participate” in LGBTQ culture, argued that the sexual revolution has trickled down to allowing “men in women’s bathrooms,” and railed against the “intolerant anti-choice censorship police.”

She even found time to take a swipe at the Oscar-winning gay romance Call Me By Your Name. She alleged that the film celebrates “man-boy love.”

Johnston said this is all part of an agenda to force equality down America’s throats.

The right-wing activist was joined on stage by Pulse survivor Luis Javier Ruiz, who addressed the Freedom March after claiming he is no longer gay in a controversial Facebook post. Prior to the June 2016 attack on the Orlando gay bar in which 49 people were killed, Ruiz said that he struggled with “perversion, heavy drinking to drown out everything, and having promiscuous sex that led to HIV.”

“The enemy had its grip, and now God has taken me from that moment and has given me Christ,” he claimed last week.

Ruiz used his speech at the Washington Monument to “ask forgiveness of the Church” from members of the LGBTQ communityas well other individuals who had been ostracized or forced out because of intolerance. He welcomed “anybody to come into the Church… to come worship in a safe place.”