Protesters are helping a California church fundraise to repair a sign which was allegedly vandalized after it bore a transphobic message misgendering and deadnaming Caitlyn Jenner.

Justin Hoke, a pastor at Trinity Bible Presbyterian Church in Lake Shastina, reported on Wednesday that a sign reading “Bruce Jenner is still a man” had been destroyed.

“Homosexuality is still a sin,” the message continued. “The culture may change. The Bible does not.”

In a Facebook post highlighting the damage, he claimed the Plexiglass had been shattered and the letters had been stolen.

“I woke this morning to find that our sign had been vandalized,” Hoke wrote. “I have not seen it up close yet as this picture was sent to me by a member of our congregation. Please pray that God would provide.”

“As wickedness increases the fear of God decrees,” he added later. 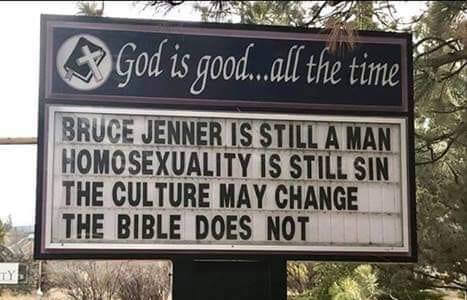 Although Hoke blamed the destruction on a group who protested the sign on Jan. 6, organizers Amelia Mallory, Charolette Kalayjian, and Mishelle Le Guellec told the Siskiyou Daily News the “Shastina Love Rally” was not responsible.

“To our knowledge, nobody affiliated with our peaceful rally was involved,” Mallory said. “If we do become aware of the culprit we will be informing the local authorities.”

Protesters “condemn the use of violence and destruction of property,” she added.

The estimated dozen protesters who gathered across the street from Trinity Bible Presbyterian Church on Sunday are reportedly planning another demonstration for this weekend. Activists say their message is “strictly of love and support for anyone who feels like they are the target of the sign.”

But in a perhaps surprising twist, members of the local LGBTQ community plan to use the rally to raise money for the church. There will be a “collection to help… with repairs to their sign” at this Sunday’s event, Mallory said.

Organizers hope the gesture will help change hearts and minds within the church.

“While we are donating with no strings attached, we do hope that pastor Hoke will reflect on the generosity of those he rebukes before posting another similar message,” Mallory told the local news station KRDV.

In a Sunday sermon, Hoke did not appear ready to make nice. He took aim at LGBTQ rights in a speech calling same-sex unions “selfish.”

“What the world calls love is not love at all,” he claimed. “Rather it is extreme mutually agreed upon selfishness which knows nothing of sacrifice, nothing of servanthood, nothing at all of seeking another’s highest good.”

The sermon was called “Love Warns.” The title is a reference to the popular marriage equality slogan, “Love Wins.”

As of Thursday, a temporary sign was back on display.  In the caption of a Facebook photo showing the glass patched together with duct tape, Hoke remarked: “It’s not pretty, but it’s back up.”