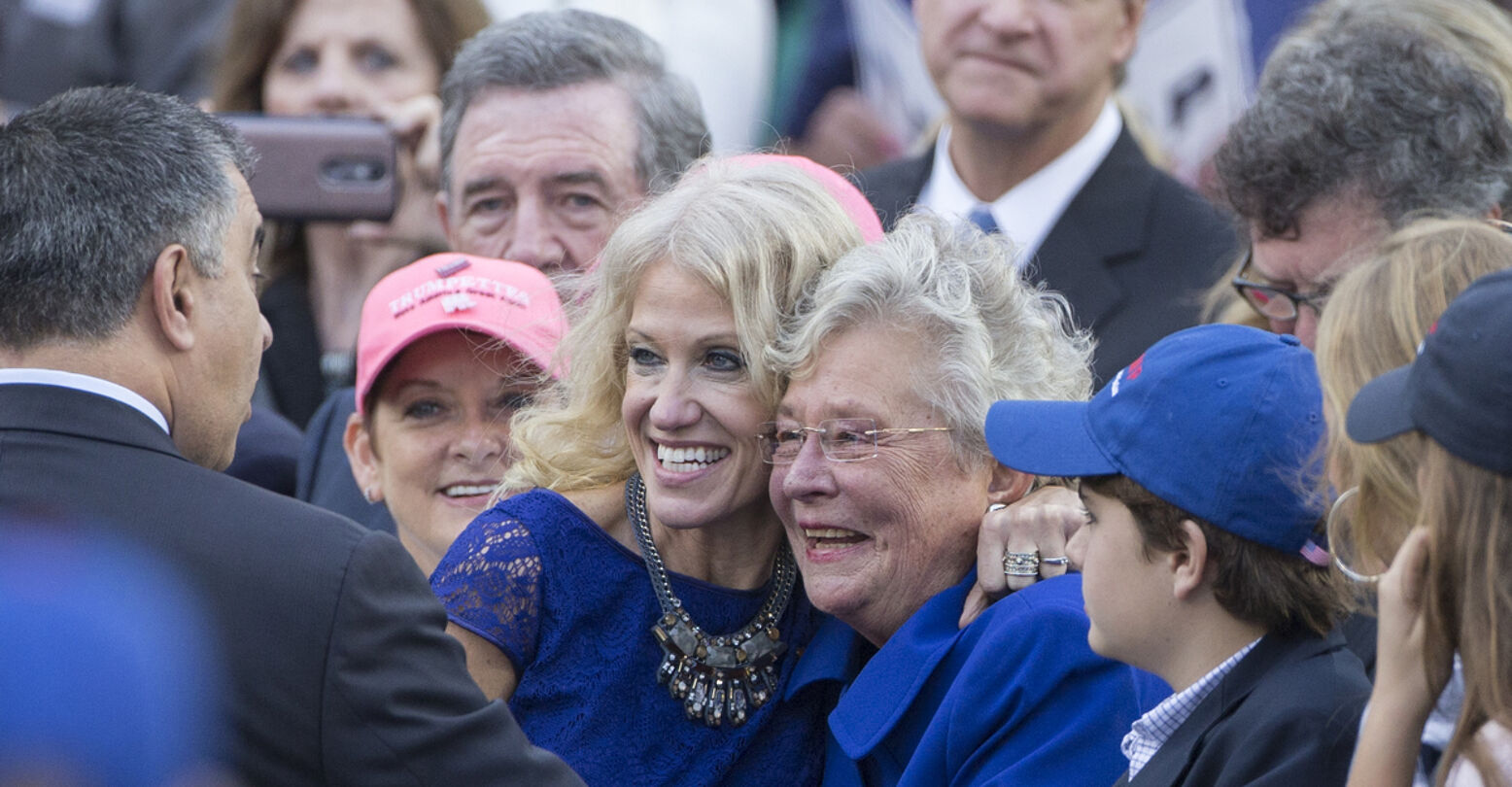 Alabama Gov. Kay Ivey has shot down comments from Alabama legislator Patricia Todd claiming that Ivey is in the closet.

Rep. Todd, herself an out lesbian, took to Facebook and Twitter yesterday calling for someone to “out” the Republican governor. “I have heard for years that she is gay and moved her girlfriend out of her house when she became Gov,” she wrote. “I am sick of closeted elected officials.” 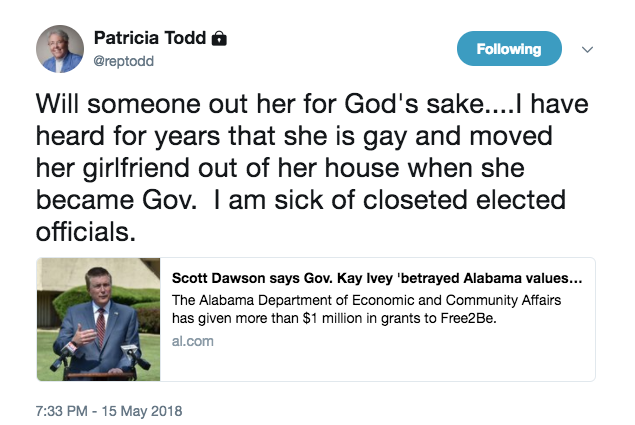 A representative for Ivey, Debbee Hancock, responded to Todd’s comments with more than a twinge of homophobia, suggesting it would be “disgusting” to be an LGBTQ person.

“This is a disgusting lie being pushed by a paid liberal political hack,” Hancock said. “There is absolutely no truth to it.”

The war of words was spawned by an $800,000 grant from the Alabama Department of Economic and Community Affairs department to Free2Be, a recently shuttered LGBTQ group based in Atlanta. The Democratic state lawmaker, who is set to step down later this year, linked on Facebook to a piece in which Republican gubernatorial candidate Scott Dawson’s condemned the state funding.

Earlier the same day, Ivey released a statement about the state’s grants given to Free2Be in which she shared details surrounding the former donations to the organization. The statement specified that Free2Be had received grants since 2014 under the Victims of Crime Act, which specified at least 10 percent of the grant dollars must be given to agencies that provide services to underserved populations, including a requirement for those to extend to orgs providing victim services to the LGBTQ community. Free2Be, the statement says, was the only organization seeking this specific grant in 2014.

“The views espoused by Free2Be, nor the extension of a grant to the program, do not represent Governor Ivey’s personal views and simply represent a requirement and demand from the federal government,” the statement concludes.”

Todd’s social media comments were directed at Ivey after this statement was released, telling AL.com that she “hates hypocrites.”

“It’s an identity issue,” she said. “I’ll catch some flak for it, but I feel a responsibilitynot as the ‘head queer’to hold people accountable.”

Ivey, who has been married to a man but is now divorced, has had an interesting trajectory in politics. Before 2002, she was a registered Democrat. Since then, she’s identified as a Republican and held public office as state treasurer until 2011 when she became lieutenant governor. She succeeded to the office of governor in 2017 after Robert Bentley resigned, pleading guilty to campaign-finance violations related to an alleged extramarital affair he had with a former staff member.

Earlier this month, Ivey signed a bill allowing faith-based discrimination against same-sex adoptive parents in the state, saying it protects “religious liberty in Alabama.” “This bill is not about discrimination, but instead protects the ability of religious agencies to place vulnerable children in a permanent home,” she said in a statement.

“I believe in the Republican Party, what we stand for, and most important, we need to have a Republican in the United States Senate to vote on things like the Supreme Court justices, other appointments the Senate has to confirm and make major decisions,” she claimed. “So that’s what I plan to do, vote for Republican nominee Roy Moore.”

Earlier this year, INTO spoke with Todd about Moore’s run for the State Supreme Court and she expressed how difficult it is to run as a democrat in Alabama.

“Do you want to elect somebody you know is going to hold the state back, who is going to embarrass us, not be able to bring jobs into Alabama, or are you willing to put your party affiliation aside and realize its more important to elect somebody who is qualified and a remarkable candidate, but just happens to be a Democrat?” she told INTO. “I’ve heard people say would rather vote for a child predator than a democrat.

“If people feel that way, that is extremely sad,” Todd added. “It’s mind boggling. And these are the people that call themselves Christians. I think it’s going to be damaging to our state for a long, long time.”

Ivey, 73, is also a known Trump supporter and is part of a push for the president to receive the Nobel Peace Prize. Despite some Alabamians sharing their disgust that Ivey failed to condemn Moore’s sexual misconduct and rampant anti-LGBTQ views, her current approval rating is the third-highest in the country for sitting governors.