Former army captain and congressman Jair Bolsonaro was voted Brazil’s next president on Sunday, tilting another major democracy into the far right.

The divisive populist figure won over 55 percent of the total vote after a violent election cycle that held the world’s attention. Bolsonaro not only echoed much of the rhetoric of United States president Donald Trump, but even exceeded him on many fronts.

The candidate experienced a sudden surge in popularity after surviving an assassination attempt in September, when he was stabbed in the abdomen during a campaign rally. He won the first round with roughly 46 percent of votes.

Recent episodes of politically motivated violence against minorities ― including LGBTQ people ― have caused valid concern in many parts of the population. As was the case following Trump’s 2016 election, the politician’s name was cited by the offenders in some of these attacks or used as an excuse to commit the crimes.

Queer and trans Brazilians, in particular, experienced a historic increase in reported anti-LGBTQ violence in just the past year.

Fear took center stage during this year’s election. That keyword helps explain why so many people decided to vote for a candidate who routinely targeted vulnerable minorities and also hints at what’s at stake once he takes office. 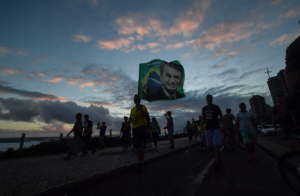 The Trump of the Tropics

Bolsonaro has been compared to Donald Trump by the media, often referred to by the nickname “Trump of the Tropics” for his populist similarities to the U.S. president.

Buoyed by an ultra-conservative agenda, the candidate has made crime a focus of his campaign amid a national security crisis. Brazil broke its own homicide record in 2017, according to a report from the nonprofit Brazilian Public Security Forum (Fórum Brasileiro de Segurança Pública). Approximately 63,880 homicides were recorded last year, a rate of 30.8 per 100,000 individuals.

His tough-on-crime rhetoric appeals to many voters throughout the country. One of his proposals consists of lowering the age in which criminal defendants can legally be tried as an adult from 18 to 16 years old. Bolsonaro believes in less restrictions on gun control and argues that there’s no direct relation between the increase of homicides and a greater presence of weapons in society.

With an apparent disregard for human rights, the candidate made statements praising torture and extrajudicial executions and openly defended Brazil’s military dictatorship, which lasted from 1964 to 1985. In an interview with GloboNews, his running mate, Hamilton Mourão, speculated about using military force to maintain control of the country in the case of a “hypothetical situation of anarchy.”

Bolsonaro also has a long history of racist, misogynistic, and homophobic comments. He once remarked that “nobody likes homosexuals, we put up with them.”

On the Câmara TV program Participação Popular in 2010, the congressman appeared to advocate that parents use violence against LGBTQ children. Bolsonaro remarked that when a young man starts “to ‘get a little gay,’ he gets smacked so it changes his behavior.”

He has also claimed he would rather his son be dead than gay.

Bolsonaro opposes any education on sexual orientation or gender identity in schools, arguing that children are subjected to “indoctrination” and “precocious sexualization” in Brazil’s public school system.

In an interview with Jornal de Barretos Radio this month, the candidate denied being homophobic: “I have nothing to do with other people’s lives. I want everything to happen within normalcy. […] I say it’s daddy and mommy who teach sex to children.”

In terms of racial equality, his plans don’t promote positive change in a country where black people represent over 50 percent of the population but only 12.8 percent of blacks between 18 and 24 years old attended college in 2015. Bolsonaro promised to scale back affirmative-action policies in public universities and declared that black Brazilians aren’t owed anything because of slavery.

“What debt of slavery? I never enslaved anyone in my life,” he argued during an interview on the Brazilian talk show Roda Viva. “If you really look at history, the Portuguese didn’t even step foot in Africa. The blacks themselves turned over the slaves.”

The use of social media was a great part of Bolsonaro’s success to connect with his supporters, a method also used by Trump during the 2016 campaign. The U.S. president’s crusade against news media outlets has been replicated as well and poses a risk to freedom of the press. 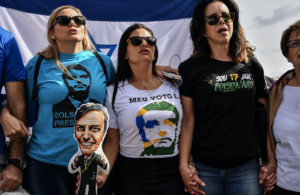 On Twitter, Bolsonaro posted a threat to national newspaper Folha de S.Paulo after an article revealing that businessmen who support him financed mass-mailing services with fake news against his rival’s party, sent via WhatsApp, which may indicate the existence of election fraud.

“The public money [Folha gets] to make political activism will dry up, and more, with their credibility in the drain with their biased information are less serious than a joke magazine!” he said.

After the WhatsApp scheme was revealed, Bolsonaro filed a lawsuit against Folha and Fernando Haddad requesting verification of alleged abuse of economic power and misuse of a social media platform. The Federal Police and the Superior Electoral Court have yet to make a public statement about the request.

The attacks on reporters, however, are not merely in the courts and on social media. In 2018, 137 journalists and media industry professionals were victims of some form of verbal or physical harassment in Brazil.

Bolsonaro’s previous statements have been legitimizing increasing violence and harassment against LGBTQ people, vulnerable minorities, or anyone who speaks out against him. It’s one of the reasons why the LGBTQ community and so many others in the country are now afraid of their future.

In the meantime, supporters maintain Bolsonaro’s victory symbolizes hope for the future. They call him a “myth” and a “legend.”

Crowds gathered outside Bolsonaro’s home in a suburb of Rio de Janeiro on Sunday evening to celebrate his victory with fireworks. “Today is the start of a new democracy,” a supporter partying outside the president-elect’s residence told Bloomberg.

Many are now anxious about what that word—democracy—will actually mean under his presidency.