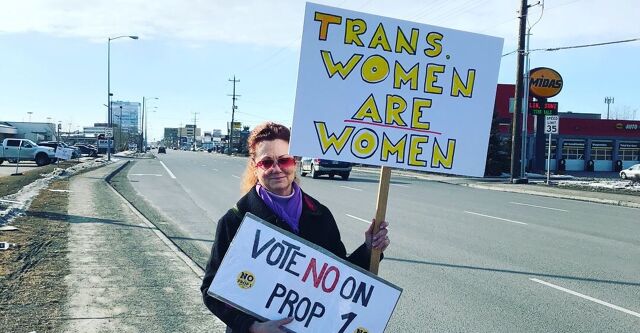 It’s the first time transgender rights have won at the ballot box in a stand alone measure. On Friday night, Anchorage’s anti-trans bathroom measure was declared defeated after a nine-month battle that ignited the city’s LGBTQ community and captivated activists from coast to coast.

“This groundbreaking, first-of-its-kind victory could never have happened without the hard work and courage of transgender people and their families in Anchorage who shared their experiences and stories of how Prop 1 would impact them,” said Kati Ward, campaign manager of Fair Anchorage, the coalition fighting the measure, in a statement. “This is a victory not only for transgender people, but for their allies and everyone who is proud to call Anchorage a welcoming place.”

The municipality has yet to certify vote-by-mail election, however, enough votes have been counted that it is no longer possible for the measure to pass. With more than 76,000 ballots counted, the “no” votes lead 52.7 percentto 47.3 percent voting “yes.” Fair Anchorage has declared victory while Jim Minnery, the measure’s proponent, has conceded a loss.

Proposition 1, would have forced transgender people into bathrooms corresponding with the gender marker on their original birth certificates, effectively writing many out of public life. The measure was a referendum on anti-discrimination protections passed in Anchorage in 2015.

It was widely viewed as the most extreme anti-trans measure pushed in the country. Many say it’s a bellwether for trans rights across the country as ballot initiatives in Massachusetts and Montana come down the pipe and legislatures consider their own bathroom bills.

But the Fair Anchorage Campaign put forth a broad coalition that included more than 35 local faith leaders, the city’s tourism organization and more than 40 businesses.

“The voters of Anchorage have clearly seen this proposition for what it wasa direct attack on the civil liberties of city residents,” Keisling said. “It seems every week makes it clearer that such discriminatory measures are opposed by all but the most fringe elements of our society.”

Jim Minnery, President of Alaska Family Council and chief proponent of the measure accused Fair Anchorage of pouring money into the campaign to “obfuscate the truth” in a statement to INTO.

“This issue is far from over,” Minnery said. “We have numerous other strategies we’re looking at now to ensure that women and girls don’t have to be in a state of undress in front of biological males. The truth is unchangeable and although we grieve for those struggling with gender dysphoria who are certainly not helped by this public policy defeat, we are encouraged by Psalm 119:89 that reminds us His word is eternal and it stands firm in the heavens. Onward Christian soldiers.”

But the Yes on 1 campaign drew intense scrutiny for allegations that it misled voters. An INTO investigation found that canvassers working to put the measure on the ballot didn’t tell voters that Prop. 1 sought to regulate trans people in bathrooms. Instead they presented it as a privacy measure, asking questions like, “Do you want men in your little girl’s bathrooms in elementary schools?”

Yes on 1 drew further ire for pushing ads that deceived residents. One featured a homeless shelter, Downtown Hope Center, that barred a transgender woman. The woman had filed a discrimination complaint against the shelter, saying she was ejected because of her gender identity.

The ad suggested that Anchorage’s non-discrimination law jeopardized a religiously-oriented shelter from operating within its beliefs. But a spokesperson for the shelter said the Yes on 1 campaign made the ads without talking to Downtown Hope Center and that the shelter follows municipal code in serving transgender women.

Voters also criticized Yes on 1 for pedaling an ad featuring a woman who said her experience encounter a “man” in a locker room watching women shower left her shaken. INTO revealed, however, that the woman “Kate” was not even from Alaska, but rather a Minnesotan woman who pushed a bathroom bill in her home state.

The harmful depiction of transgender women as “a man in the bathroom” had a powerful impact in Anchorage, however. Advocates say the campaign had to outspend the opposition by at least 7 to 1 to win because of the message’s potency. That’s because most people don’t yet know a trans person.

And for many trans people in Anchorage, victory alongside the knowledge that 47 of their neighbors voted to strip their rights is cold comfort.

“Though the defeat of Proposition 1 is a wonderful sigh of relief, the fact that there were so many votes in favor of the measure means we have a long way to go,” said Lee Harrington.

LGBTQ advocates are already looking to battles in other states. Massachusetts will vote on the first ever statewide anti-trans ballot initiative in November.

“The campaigns ahead won’t be easy,” said Masen Davis, CEO of LGBTQ political organization Freedom for All Americans. “But Anchorage will serve as a shining example of what we can achieve when we have honest, one-on-one conversations about who transgender people are.”