The images of Kendra Rodriguez Martinez, bloodied and hospitalized, are the kind you have to immediately look away from. You can’t unsee them, even if you wish you could.

Still, more than 900 people shared the pictures on Facebook, some decrying the beating of the Latinx trans woman while others mocked her.

On Tuesday, members of Charleston, South Carolina’s LGBTQ community sat down with advocates and police and tried to digest the fallout from the August 19 incident. The same night the Charleston Police Department arrested 30-year-old Christopher Lamar Price for the attack. The department is finally calling the incident a hate crime, something the LGBTQ community has assumed for weeks.

“What are we doing as a community to stand alongside our trans community and not just our trans community but our LGBTQ community as a whole?” Chase Glenn, executive director of the LGBTQ organization the Alliance for Full Acceptance (AFFA) asked in a phone call with INTO. “We’re just starting that conversation. Here in the south, a lot of us are struggling, and these conversations are just beginning.”

According to police, Martinez was attacked at around 2:00 am outside Deco Nightclub on Ann Street. (The club, incidentally, has been under fire in recent months for its reported racist door policy).

Martinez was leaving Deco with two others when Price approached the group, police said.

“Comments were made about her gender identity,” Public Information Officer Charles Francis told INTO. “I can’t tell you what was said.”

Glenn, who has spoken with Martinez, said the attacker hurled anti-trans slurs at her as the group tried to make their way to their car in a parking garage.

The man followed them into an elevator, kicking Martinez’s sister.

“Kendra tried to protect her sister, and he just hauled off and knocked her out onto the pavement,” said Glenn.

Martinez was hospitalized in critical condition.

News of the attack was slow to reach LGBTQ advocates because police did not initially call it a hate crime. Glenn first got word of it when a Facebook friend shared a viral post with photos of Martinez in the hospital four days later, her head bleeding and her neck in a brace.

“I reached out to our chief of police and our deputy chief and let them know that I had just seen this post and was super concerned that I hadn’t heard about this yet,” Glenn said.

Police interviewed Martinez following those inquiries and learned that anti-trans slurs preceded the assault. They invited AFFA leaders to view footage of the incident.

“It was pretty clear that there was an interaction between the victim and the assailant,” said Glenn.

In the video released Tuesday to local news outlets, a woman is seen standing between the assailant and another woman. The man punches the victim and runs away. She falls to the ground and stops moving. 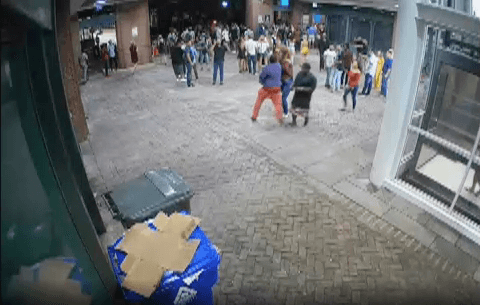 The incident has sent Charleston’s LGBTQ community reeling. More than 1,000 people reacted to the initial post detailing the attack. A GoFundMe campaign for $2,000 to offset Martinez’s medical bills raised more than $2,300 in less than two weeks.

On Tuesday night, Charleston’s queer community told police they too have felt threatened on the city’s streets and worry about police competency in interacting LGBTQ people, according to The Post and Courier.

In a conversation with INTO, Police spokesperson Francis insisted that department officers did not require LGBTQ-specific training.

“They’re trained to deal with every segment of the community,” Francis said.

But Glenn said LGBTQ advocates had, in fact, developed a transgender-specific training in partnership with police. It has yet to be administered.

The town hall meeting, he hopes, is a first step, and not just for police.

“I hope that this is a moment where the conversation shifts and in one year, five years, we can look back and say this is a moment when we can really say something really started to change, at least in the broader sort of community in support and acceptance,” said Glenn. “But that is a big ask. That’s a big issue.”

Price faces second-degree assault and battery charges. South Carolina is one of just five states without a hate crime law on the books.