In fights being watched with the intensity of California’s historic Prop. 8 marriage vote, three states are expected vote on anti-trans measures that strike at the very humanity of transgender people.

“I have been working in the movement for two decades as of this year,” says Kasey Suffredini, co-chair of Freedom for All Massachusetts, the campaign against the Massachusetts measure. “There has been no other fight that I have been part of that has felt so urgent because of the consequences of what’s to come based on what we’ve seen before.”

The state, long hailed as a beacon of LGBTQ equality, is staring down the nation’s first-ever statewide anti-trans ballot initiative. Montana and Anchorage, Alaska are facing measures so extreme advocates say they strive to write trans people out of existence.

As expected, Freedom for All Massachusetts is equipped with powerful allies to fight the measure. Boston Mayor Marty Walsh has been an outspoken proponent of transgender rights. Two years ago, Walsh signed an executive order to bring gender neutral bathrooms to Boston City Hall.

Walsh is among 17 mayors in the state who have vowed opposition the initiative. Other signatories include a laundry list of business leaders, prominent educational institutions like Harvard and MIT as well as all of the city’s major sports teams.

Despite a groundswell of support, advocates are as worried as they are optimistic.

“I think people maybe have the false confidence that Massachusetts will easily vote this down,” Janson Wu, executive director of GLBTQ Legal Advocates & Defenders in Massachusetts, told INTO. “People are hell bent on making an example of Massachusetts.”

Suffredini thinks of all states, Massachusetts is most likely to give trans people a win. “If they are successful in repealing these protections, I think we are all aware of the national implications of that,” he says. 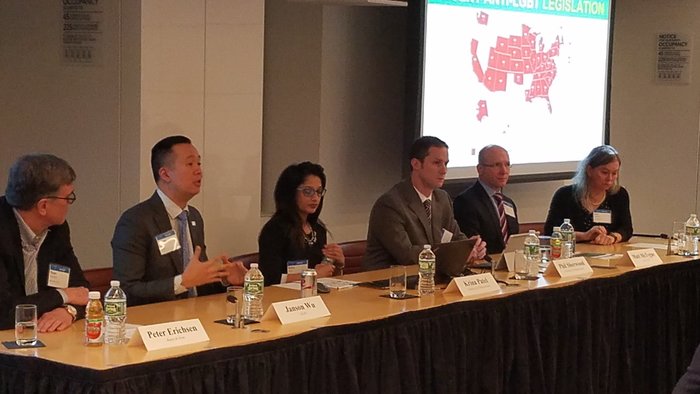 Perhaps more urgently, Anchorage, Alaska will vote by mail this spring on a measure that aims rollback non-discrimination protections and segregate bathrooms by sex according to original birth certificates.

Advocates also say Prop. 1 also has a 50/50 shot at passing and view it as another barometer on trans rights nationally. The measure is so extreme opponents say it strives to remove trans people from municipal code and public life. It defines “sex” as immutable, regardless of a person’s, lived experience, safety, health, presentation or updated legal documents.

Jay Wu, communications manager at the National Center for Transgender Equality, notes that the bill goes even further than North Carolina’s infamous HB 2, which was repealed.

“But the outcome is similar: it means that many transgender people simply won’t be able to use the restroom, and for many people not having safe access to the restroom means you can’t go to school, go to work or participate in public life,” Wu says.

Fair Anchorage, the campaign battling Prop. 1, has also built a coalition of support that includes the Anchorage Chamber of Commerce. Both the incumbent Mayor Ethan Berkowitz and his Republican opponent Rebecca Logan oppose Prop. 1.

Transgender opponents in Montana are gathering signatures to put a similar state-wide measure on the ballot after they failed to get it passed through the legislature last spring.

Initiative 183 is expected to make it on the ballot, says SK Rossi, director of advocacy and policy with the ACLU of Montana.

“If you want to get something on the ballot on Montana, it’s not that difficult,” Rossi says.

Similar to Anchorage’s Prop. 1, it defines “sex” as “a person’s immutable biological sex as objectively determined by anatomy and genetics existing at the time of birth.”

As in Anchorage, transgender people will be forced to use bathrooms and locker rooms according to their sex assigned at birth, regardless of other factors including their updated legal documents.

Perhaps most dramatically, it allows people who encounter a someone of the “opposite sex” the right to sue the government.

The entire measure has been criticized as unclear, and Rossi says questions remain over the fate of single-stall gender neutral restrooms if it passes.

“There are multiple points where you ask yourself ‘what does this even mean?’” they say.

In September, the Montana Supreme Court ruled in favor an ACLU challenge to 1-183’s language. The ACLU argued that the measure failed to clearly lay out the impacts on Montana’s economy or transgender population. A revised measure has since been released.

The measure would cost an estimated half million dollars in updated signage, I-183, notes and, “long-term costs and legal fees for state and local governments, K-12 schools, and universities could be substantial, but are uncertain,” it notes.

If passed, the I-183 would hit students hardest, says Rossi.

“In Montana we have a really good public education system,” Rossi tells INTO. “I think that’s one of the scariest things about this is that you’re taking a public school system that is trying and in many cases doing it right and basically putting them back at square one.”

The measures are not the only anti-trans policy brewing. States across the nation are staring down similar bills. But ballot measures are easier to pass.

And opponents can confuse an intimidate voters, especially on bathroom bills, say advocates. By painting transgender people as predators threatening to assault women in bathrooms, opponents prey on lack of familiarity with trans lives in the American public. According 2016 Pew Research Center findings, 87 percent of Americans know a gay person, and only 30 percent know someone who is trans.

“[Opponents] are in a race against time to capitalize on the fact that Americans don’t know yet know who transgender people are in order to enshrine discrimination against us before people realize that we are their friends and their family members and neighbors,” Suffredini says.

Images via Freedom For All Massachusetts