A sign language interpreter is speaking out after Australia’s “No” campaign used her image in an anti-marriage equality ad without her permission.

Paola Mitchell, 32, appears in the latest commercial from the right-wing Coalition for Marriage. Entitled “Part of a Bigger Agenda,” the 30-second video opens with footage recorded at an Equal Love rally four years ago. Mitchell was asked to volunteer at the event. In the brief segment, she’s shown translating a speech by Safe Schools program founder Roz Ward into Auslan (the abbreviated term for Australian sign language).

Mitchell, who identifies as a lesbian, tells INTO that she was “absolutely horrified” after discovering she was included in the video. The Melbourne resident says that she learned about it after a friend saw the segment on the television at a doctor’s office.

“I can’t believe my face was put to something that is so the opposite of my beliefs,” she says. “I believe in equality and fairness.”

Australia is currently holding a non-binding vote on marriage equality, one that will advise lawmakers in the Parliament on whether to introduce a bill legalizing same-sex marriage. Mitchell worries that people will associate her face with the video and get the wrong idea about her vote in the national plebiscite.

“There will be people who don’t understand the ad and unfortunately might automatically believe I hold those bigoted views,” she claims.

Mitchell has called on Coalition for Marriage, which has been campaigning against same-sex unions, to pull the ad. The conservative group has not said whether it plans to do so and issued a non-response to her complaints in Australia’s News Corp.

A spokesperson says members of the Coalition “sympathize” and “can understand why she would want to distance herself from… the radical Safe Schools program.”

The Safe Schools Coalition Australia, which was established in 2010, is a government-funded program which furthers LGBTQ-inclusive education in schools. The initiative has proven surprisingly controversial. The attack ad singles out an excerpt from literature distributed in South Australia which tells students that “penis-in-vagina sex is not the only sex.”

Despite her support for LGBTQ equality, Mitchell claims that her appearance at the rally was not meant to be a statement of her beliefs.

Interpreters are hired to provide a service, she explains. The message they are tasked with translating for deaf audiences may not be one they personally endorse. For instance, if Mitchell were hired to work at a conservative event, her personal views wouldn’t be relevant.

“We’re taught to be impartial,” she claims. “I’m just there to relay a message.”

Mitchell says that she was motivated to be a part-time Auslan interpreter because of her parents, who were both deaf. Although she works as a chef to pay the bills, Mitchell received her Australian sign language certification six years ago. She worries that this controversy could jeopardize her “longstanding ties” to members of the deaf community. 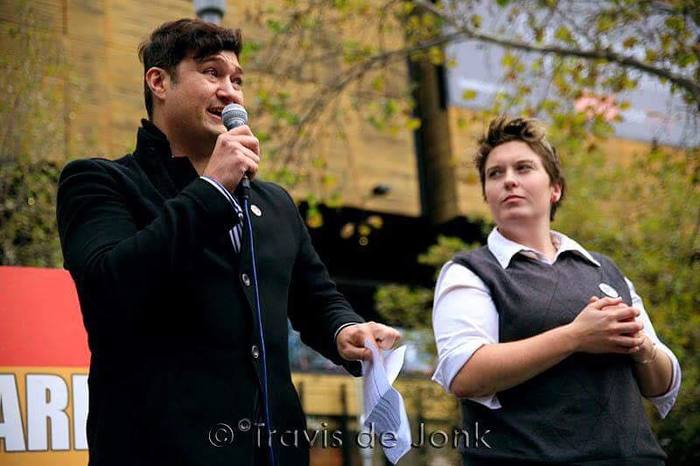 Since the video went live on Oct. 22, Mitchell adds that she has barely slept.

“There are people commenting on Facebook that they wouldn’t hire me because I support ‘gay sex education’ and ‘pedophilia,’” she says, claiming that she has yet to receive direct threats.

The Coalition video is just one of a series of attack ads aired on national television, in which parents warn that legalizing love would have a disastrous impact on Australia. In a previous commercial, Dr. Pansy Lai warns that youth programs pushing the LGBTQ agenda will become “widespread and compulsory” should Australia vote “Yes.”

The government has urged Australians to mail in their ballots by Friday in order for them to be properly counted. An estimated 70 percent of the public has already voted. Among those who have voiced their opinion, the “Yes” campaign leads with 59 percent.

But with the widespread venom that the plebiscite has brought out, Mitchell is concerned about how Australia will vote. News Corp. editor Claire Sutherland reported in September that a man attempted to kick her dog in a park for wearing a same-sex marriage bandana. LGBTQ people have had their homes targeted with swastika graffiti.

“I really hope that a majority of Australians will vote ‘Yes,’ but after all this negativity in my own life, I’m worried,” she says. “It feels so backward and out of date. I feel like [Australia] must be the laughingstock of the world.”