Australia’s long national nightmare has finally come to an end.

Polling closed on Tuesday in the country’s national plebiscite on marriage equality, a controversial vote that has torn apart the once peaceful nation. The brutal, ugly campaign has brought out virulent homophobia that would have been unimaginable a year ago. A Greek Orthodox priest advocated that all LGBTQ people be murdered. Same-sex couples had horse manure left on their doorsteps. “No” supporters vandalized rainbow flags with swastikas.

A man in a Melbourne park even attempted to kick a dog wearing a bandana advertising the “Yes” campaign.

But four months after the plebiscite was announced, LGBTQ Australians may have good news headed their way: Early surveys conducted by the Guardian Essential Poll show that 64 percent of those who have voted in the plebiscite say that they cast a ballot in favor of same-sex marriage. Just 31 percent of the 1,792 people polled say that they voted against the freedom to marry. 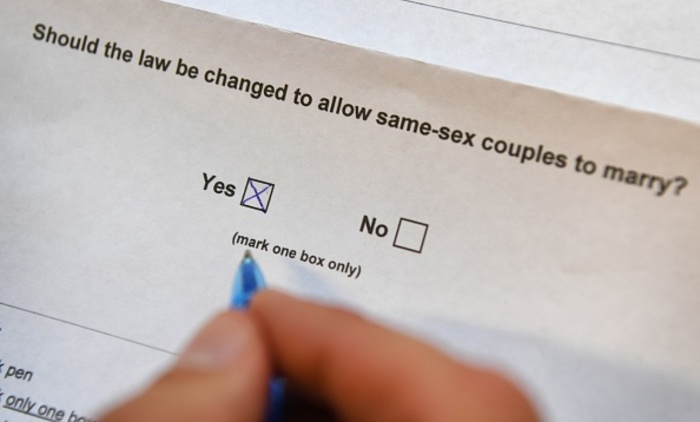 Support for the “Yes” campaign has actually been on an upward trend in recent weeks. In the past two weeks, the share of Australian voters who claim to have given a thumbs-up to same-sex unions increased by four percent.

Voters had until 4:30pm Tuesday to cast their ballot in the voluntary referendum.

Despite the fact that ballots are still being counted at the time of writing, the plebiscite has already enjoyed a record turnout. An estimated 2.6 million Australians have voted in the postal survey, which amounts to 78.5 percent of eligible voters. That share of the public is higher than the 2015 referendum on marriage equality in Ireland, as well as the Brexit vote last year. 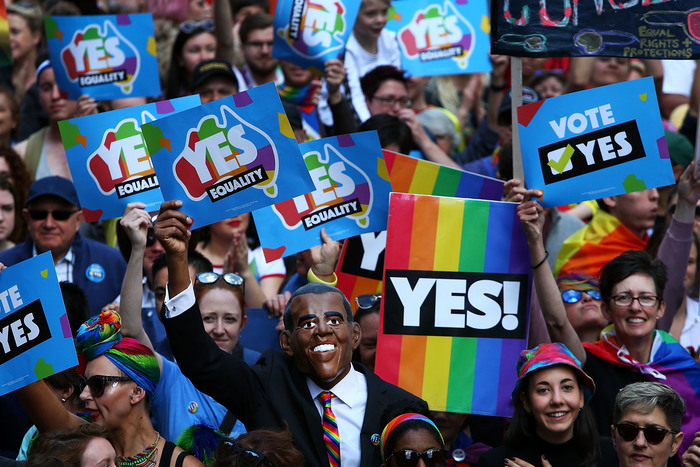 But same-sex couples shouldn’t get comfortable just yet.

An October analysis conducted by Griffith University in South East Queensland predicted a narrow win for the “No” campaign, breaking with the findings of nearly every other major survey. Researchers tracked opinion on Twitter, using a similar model to the one that forecasted Donald Trump’s surprise win in the 2016 election.

Early exit polling shows that voters over the age of 55 were the most likely group to have voted in the referendum, as well as the most likely to vote “No.” That could be a sign of trouble.

Results in the $122 million survey won’t be announced until Nov. 15. Although the vote isn’t binding, Prime Minister Malcolm Turnbull has claimed that if the country votes in favor of legalizing same-sex unions, the Parliament will introduce a marriage equality bill by Christmas. A win for the “No” campaign would result in no change in the law.