Kerryn Phelps is currently the most talked about woman in Australia.

Earlier this month, it was officially announced that the lesbian practising doctor and media personality had won the by-election triggered by the ousting of former Prime Minister Malcolm Turnbull by Australia’s ruling conservative Liberal party.

There was a historic 19% swing against the government. Not since the seat of Wentworth was established in 1901 has an MP from any party other than Australia’s conservative Liberal party won an election here. This was one of the largest swings against a sitting government in Australian political history, and it caused the government to lose their one seat majority; it must now rely on votes from crossbenchers like Phelps. 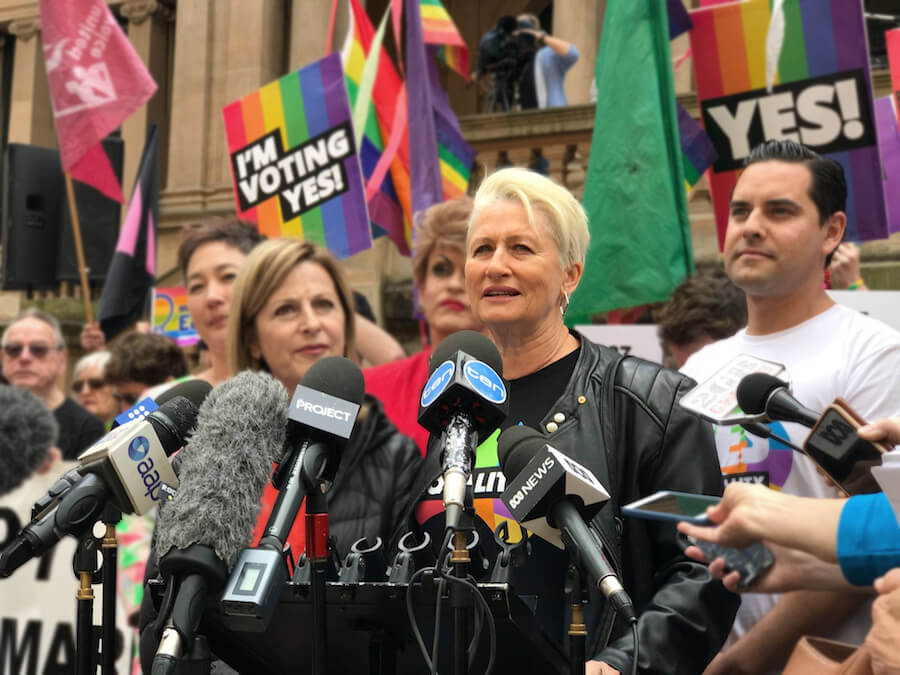 There’s much to celebrate for Phelps, a leading campaigner for marriage equality, as she marks the one year anniversary of Australia’s yes vote. She’s already mastered the politician’s cautious response when I ask her if she’ll have a much-deserved glass of champagne: “I’ll be celebrating with friends and fellow travellers” she tells INTO.

It’s all a far cry from when she was publicly outed by a Sunday tabloid newspaper in 1998. In the January of that year, Phelps flew to New York for a private partnership ceremony with her partner, Jackie Stricker-Phelps, then a primary school teacher. It took place under the chuppah in a private apartment on Park Avenue. Phelps converted to Judaism in 1999 and the pair had a civil ceremony at New York’s City Hall when the state legalised same-sex unions in 2011. On the 20th anniversary of their first ceremony, earlier this year, the pair became the first couple in Australia to have a Jewish same-sex wedding.

But, back in 1998, the outing was a rude awakening. “It certainly wasn’t in the plan at that stage professionally, to come out,” she says. “It was the first time a couple had been outed by the Australian media. I wasn’t at all prepared for it. Because I was on TV as a doctor, it began the conversation about marriage equality in Australia and, for quite some time, Jacqui and I became the face of it.”

In addition to Labor Senator Penny Wong, whose trademark composure breaking at the announcement of the Yes vote went viral, Phelps is now the federal Australian Parliament’s second out lesbian MP. She’d like to encourage more: “I’d like to see anyone with the passion or skills for politics to not be impeded by being a lesbian like in the past” she says. “I’m really pleased to see barriers being broken. I support quotas for more female MPs and, whilst I don’t support quotas for LGBTQI MPs, it’s important parliament reflects the community it serves, including the LGBTQI community.”

Phelps is used to firsts; she was also the first woman to be elected president of the Australian Medical Association. Now, as federal MP, she plans to use her influence to positively affect debates happening around LGBTQI issues in Australia, including ‘gay cure’ therapies and the rights of religious schools to hire and fire gay teachers and expel gay students: “No students should be expelled by an organisation because they’re gay or perceived to be LGBTQI and no teachers should be removed from employment purely for being LGBTQI” she says.

As a practicing doctor, her view on ‘gay conversion’ therapy is particularly credible: “It’s dangerous, unethical and should be banned” she says. Australia’s new Prime Minister, Scott Morrison, has said  it’s “not an issue I’m focused on at all” and that people should “make their own choices about their own lives,” despite a major recent report revealing its prevalence and damage in Australia. “I think his church needs to be asked if it conducts gay conversion therapy,” Phelps says.

I contacted Morrison’s church — Sutherland’s Horizon Pentecostal — to ask if they practised such ‘therapy,’ or supported it. Their response was clear: “Wherever possible and appropriate we refer counselling requests to qualified health professionals. Horizon Church does not run or support gay conversion therapy programs.”

There’s been discussion about how Phelps will manage three jobs – as a practicing doctor, a federal MP and a City of Sydney councillor. “I’ve always balanced several jobs, since I was a teenager” Phelps says. “I’m very happy to work very long hrs 7 days a week. That’s nothing unusual for me. Writing books is the most time consuming, so I’ve suspended the deadline for my next book.” 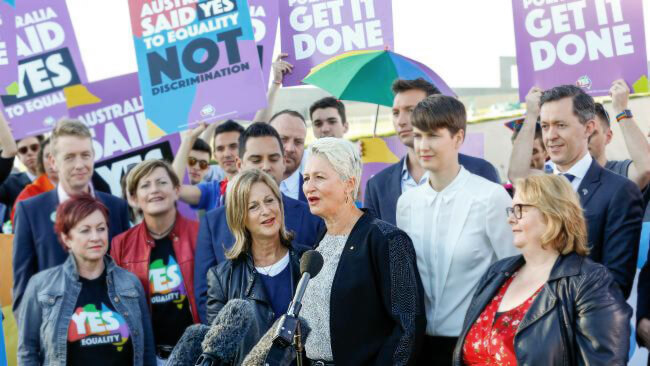 Phelps resigned as Deputy Lord Mayor of Sydney after falling out with pro-LGBTQI Mayor Clover Moore and leaving her independent team over issues including Phelps’ desire to force Sydney cyclists to register. She’ll now juggle these local issues with major national ones – in addition to seeing patients. She lists her political priorities as stopping offshore detention of refugee children, preventing major new coal mines and encouraging more action on climate change.

Before speaking to INTO, Phelps got up at 6am and went for a one km swim at Bondi. “I always prioritise exercise” she says. She’ll work till at least 11pm tonight, like she does most nights.

“I make sure I spend time with Jacqui every day too” she adds. “We always eat dinner together.” And with that Australia’s busiest woman is off to serve more constituents, patients and voters – squeezing in dinner with her beloved partner who’s been on this journey with her from the very start.