The new President and CEO of Land O’Lakes, Beth Ford, will make business history when she assumes the role on Aug. 1 as the first openly lesbian woman leading a Fortune 500 company. The company announced her appointment in a press release last week.

The Land O’Lakes, Inc. Board of Directors made the announcement on July 26. Founded in 1921, the company is one of the U.S.’s largest food and agricultural cooperatives. It sits at number 216 on the Fortune 500.

Ford will replace Chris Policinski, who is retiring, according to the company’s statement. Prior to being selected as CEO, Ford served as Chief Operating Officer at Land O’Lakes Businesses as well as head of Land O’Lakes Dairy Foods and Purina Animal Nutrition.

“At a time of unprecedented change in the agriculture and food industries, no person is better suited to lead us into the future than Beth Ford,” Board Chairman Pete Kappelman said in the statement. “We are thrilled to have someone of such strong qualifications and character to build on the legacy of growth that Land O’Lakes has established.”

In response to her appointment, Ford said in the statement, “I’m humbled and honored to have the chance to serve this great organization […] I look forward to continuing to work with the talented and dedicated leadership team, as well as our outstanding employees to deliver for our member-owners, customers and communities.”

The statement notes that Ford lives in Minneapolis with her spouse, Jill Schurtz, and three children.

When Ford steps into the CEO role, she’ll join only 24 other women who lead Fortune 500 companies, making up 5 percent of the leadership on the list, according to Fortune. The outlet notes that of those 25, only two are women of color, Geisha Williams of PG&E Corporation and Indra Nooyi of PepsiCo. 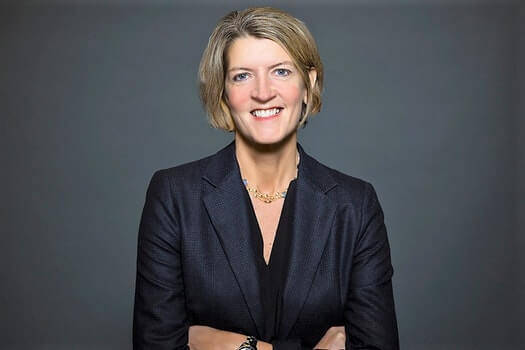 Ford will also become only the third openly LGBTQ CEO of a company on the Fortune 500 and the first woman, reports Fortune. For queer women, holding top executive positions is rare. Examples, according to CNN, include the CEO of Lloyd’s of London, Inga Beale and United Therapeutics’ Martine Rothblatt, yet none had reached the elite club of the Fortune 500 until Ford.

Speaking to Fortune, she said that the fact that she’s the first openly lesbian to hold the role is “not nothing.” She tells the outlet that during her 20s she felt she could not be her real self in her workplace.

“If [one of a few openly LGBTQ CEOs] gives someone encouragement and belief that they can be their authentic self and live their life and things are possible, then that’s a terrific moment,” Ford said.

“I think I’ve been fortunate since my mid-30s of being just who I am,” she told Fortune. “I think it must be really hard if you feel like you’re in a culture where you can’t be who you are.”

Rights groups have praised Ford’s selection. Deena Fidas, the director of workplace equality at the Human Rights Campaign (HRC), tells CNN, “The fact that she is assuming this role as an out lesbian sends an especially powerful message.

“This is not a story of someone getting into the higher echelons of leadership and then coming out. This is someone walking into this role with her full self,” she added.

As INTO reported previously, HRC released a research report titled “A Workplace Divided: Understanding the climate for LGBTQ Workers Nationwide” in June and found that 46 percent of LGBTQ people surveyed have not come out to their coworkers. Much of this stemmed from a fear of discrimination or experience at work. For instance, more than 50 percent told HRC that they would regularly hear jokes targeting LGBTQ individuals in their office.

Respondents also reported that many of these experiences had increased over the past year.

“While LGBTQ-inclusive corporate policies are becoming the norm, LGBTQ workers too often face a climate of bias in their workplace,” Fidas explained in a statement at the time of the report’s release.

“LGBTQ employees are still avoiding making personal and professional connections at work because they fear coming out—and that hurts not only that employee, but the company as a whole.”

Fifty-nine percent of non-LGBTQ people surveyed also felt that it would be “unprofessional” to discuss sexual orientation or gender identity in the workplace, INTO reported. And 36 percent responded that they would feel uncomfortable listening to an LGBTQ-identifying coworker discuss their dating life. An astonishing 50 percent of non-LGBTQ respondents said that there were no openly LGBTQ people at their work.

Some organizations have begun tracking the best workplaces for LGBTQ-identifying people. Stonewall, a United Kingdom-based LGBTQ rights group, released their list of Top Global Employers on July 19 that included companies like Accenture, BP, and SAP along with 10 others.

“At a time when global LGBT rights are under threat of going backwards, we’re proud to work alongside our Top Global Employers, who operate in some extremely difficult contexts, to ensure all people are protected and welcome at work, wherever they are,” said Stonewall’s Chief Executive, Ruth Hunt, in the list’s announcement.

Ford commended Land O’Lakes Inc. for their support of her. “I am extraordinarily grateful to work at a company that values family, including my own,” Ford told CNN in a statement. “The Board chose the person they felt best met the criteria to drive success in the business. I realize this is an important milestone for many people and I am pleased to share it.”