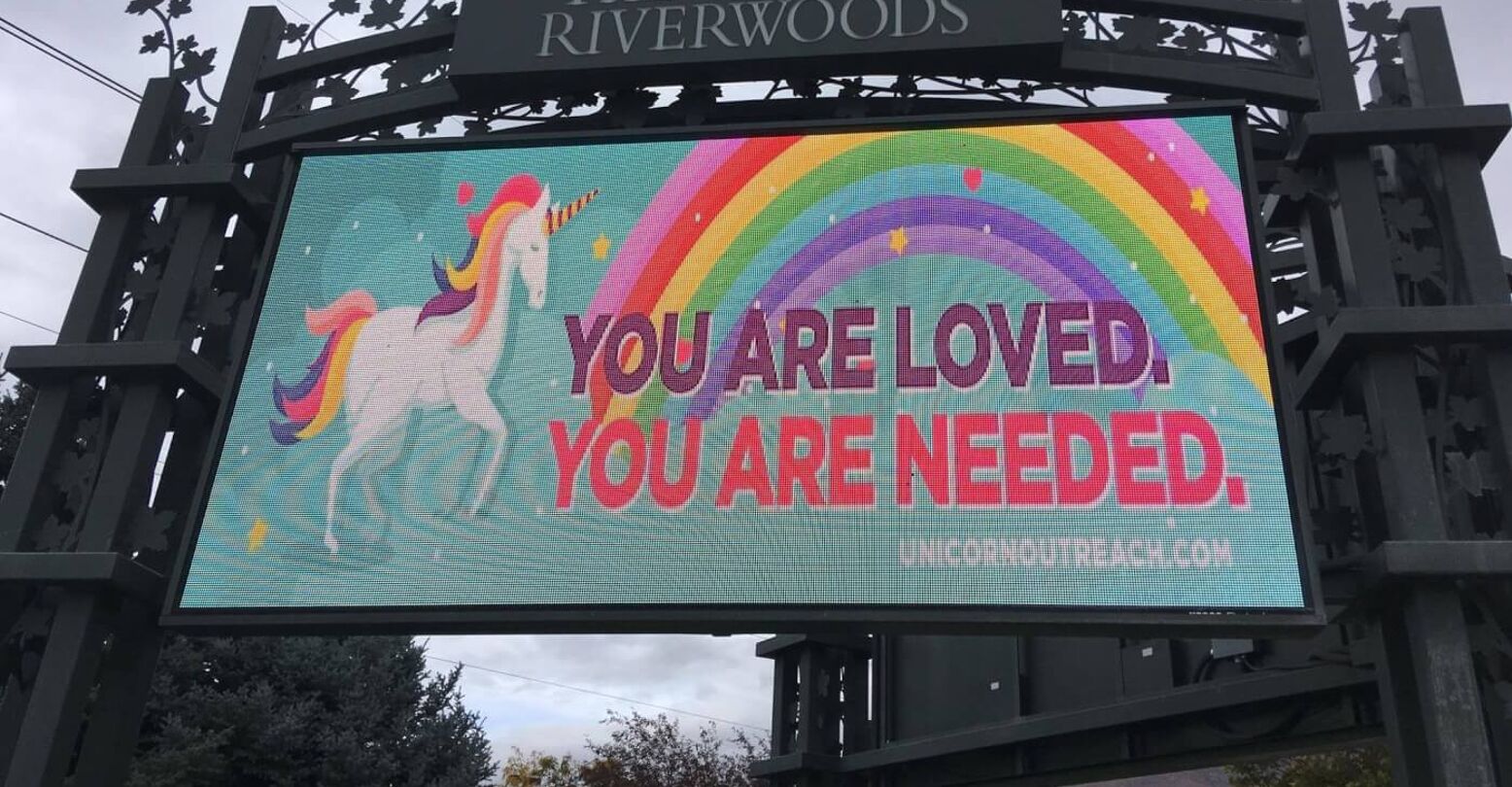 A new billboard campaign is sending a message of hope and support to LGBTQ people in the Mormon Church. “You are loved,” reads a series of billboards along the I-50 corridor. “You are needed.”

In late September, Jerilyn Hassell Pool purchased four digital billboards across Utah. Founder of the youth advocacy group QueerMeals, Pool claimed she wanted to send “words of encouragement” to queer and trans individuals who may be struggling in a conservative state with an extremely high rate of suicide attempts.

“I’d just gotten paid to do a graphics job for a client who’s very Mormon, and I thought I would put that money into the billboard,” she told INTO.

Pool paused to consider whether it was appropriate to say who the client was.

“It was a stake,” she said, a reference to the name for individual congregations in the Church of Jesus Christ of Latter-day Saints. “They had hired me to do some design work, and so I got this money that was essentially money from the Mormon Church.”

“The joke was that I was calling them the ‘reparations billboards,’” Pool added. 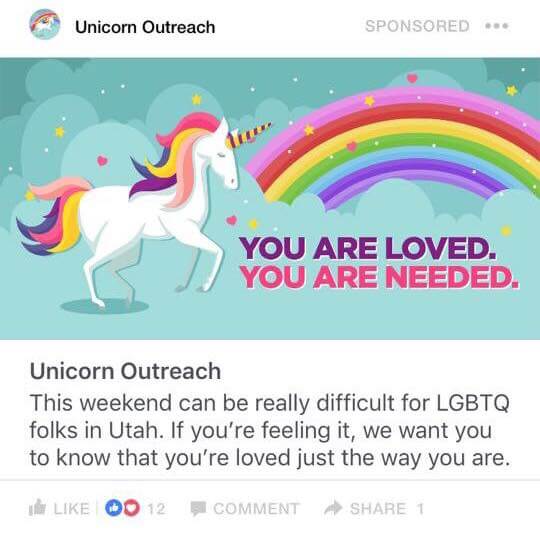 Originally, the idea was that the display would simply state the two-sentence message against the backdrop of a rainbow and a giant unicorn. The billboard company initially rejected the design, however, because it wasn’t associated with a website or a particular organization. They claimed the proposal didn’t have a “point.”

But Pool figured its purpose was fairly obvious in a state where suicide is among the leading causes of death for youth between the ages of 11 and 17, particularly if they’re LGBTQ.

Much of the blame for that crisis has — whether fairly or unfairly — been laid at the doorstep of the Mormon Church.

Almost exactly three years ago, LDS leaders released a policy classifying same-sex married couples as “apostates” and stating that their children are ineligible for baptism. To be blessed in the church, the children of gay couples must disavow their parents’ marriage upon turning 18.

In the three months following what’s referred to as the “November policy,” the LDS support group Mama Dragons alleged that 32 youth took their own lives.

That figure, however, has been contested by the Utah Department of Health.

“The Mormon Church has made it very clear how they view the LGBTQ community,” Pool said. “Often queer folks have families who feel they have to choose between their LGBTQ family member or the Mormon Church.”

“I find that queer folks expect their families to choose the church over themselves,” she added.

To appease the billboard company, Pool created a website for LGBTQ people who may likewise be experiencing suicidal ideation and need to know where to turn. Called “Unicorn Outreach,” the plan is to expand the site to include resources for domestic violence and sexual assault, as well as resources for homeless youth on where to obtain food and housing.

Because Pool is paying for the project out of her own pocket, the digital billboards have been primarily running at night and during the middle of the day — aka off-peak hours. It’s what she’s able to afford on a limited budget.

“That’s fine,” she said. “They’re there for who needs to see them.”

While the billboards typically reach about 1,200 people a day, Pool expanded the campaign during the weekend of the Mormon Church’s 188th Semiannual General Conference. Held between Oct. 6 and 7, the bi-annual event brings together LDS leadership from all over the world.

Each conference typically features a smattering of anti-gay remarks from Mormon leaders. This year Dallin H. Oaks, one of the highest-ranking officials in the LDS church, claimed LGBTQ advocacy is the work of the devil.

“Our knowledge of God’s revealed plan of salvation requires us to oppose many of the current social and legal pressures to retreat from traditional marriage or to make changes that confuse or alter gender or homogenize the differences between men and women,” he claimed in a widely publicized speech.

Satan “seeks to confuse gender [and] to distort marriage,” he added.

During the wide-ranging address, the first counselor in the First Presidency of the LDS church alleged gender is unchanging in God’s eyes and that “marriage between a man and woman is essential to His eternal plan.”

As LGBTQ people remain under siege by Mormon leadership, Pool (who is straight) said they need to know allies have their back.

“Every day I speak to LGBTQ folks in the state of Utah who wants to kill themselves,” she claimed. “But since I’ve launched the campaign, I’ve had many, many people reach out saying they were hopeful to see an ad. They send me screenshots or photographs of when they saw these billboards or ads and say that it made their whole day.”

“Many of them said it came at exactly the right time and it gave them so much hope,” Pool continued.

The great majority of the LGBTQ people who need to hear that affirming message have yet to see the billboards, however. In order to extend the reach of the campaign, Pool has invested in Facebook advertising, where she said the messages now reach an additional 3,000 people each day.

In addition, she intends to launch a new set of billboards next Wednesday with additional designs.

But Pool said that she hopes the campaign doesn’t just touch the lives of LGBTQ Mormons. She hopes the billboards and the website help educate straight and heterosexual members of the LDS faith on how to be better allies at a time when so many need their solidarity.

According to Pool, that work begins with “listening” to the needs of queer and trans people.

Although these conversations remain intensely painful for many families and communities, Pool said she’s already seen that shift amid three years of intense soul-searching. She believes LGBTQ people are being “treated by rank-and-file Mormons with more kindness.”

“I feel like the LGBTQ folks in Utah are more bold, and they are finding their place,” she claimed. “They’re not backing down and they’re asserting themselves.