Residents in three cities woke up on Monday morning to billboards blasting laws allowing people of faith to refuse service to members of the LGBTQ community.

“Religious freedom is no excuse for discrimination,” they read.

The signboards in Los Angeles, New York City, and San Francisco are part of “No Excuse,” a month-long campaign from Lambda Legal. According to a statement on its website, the LGBTQ advocacy group hopes to use the public visibility to raise awareness about “so-called ‘religious freedom’ bills in Congress and in states across the country, which prioritize some people’s religious objections over others’ individual rights.”

“We want to remind our communities, especially in this political climate, that there is a culture war being waged by evangelical extremists with LGBTQ people in its crosshairs,” Angelo Ragaza, director of marketing and editorial at Lambda Legal, claimed in a statement.

“We’re on the front lines, fighting efforts to enshrine discrimination into law,” he added. “We must be more vigilant than ever.” 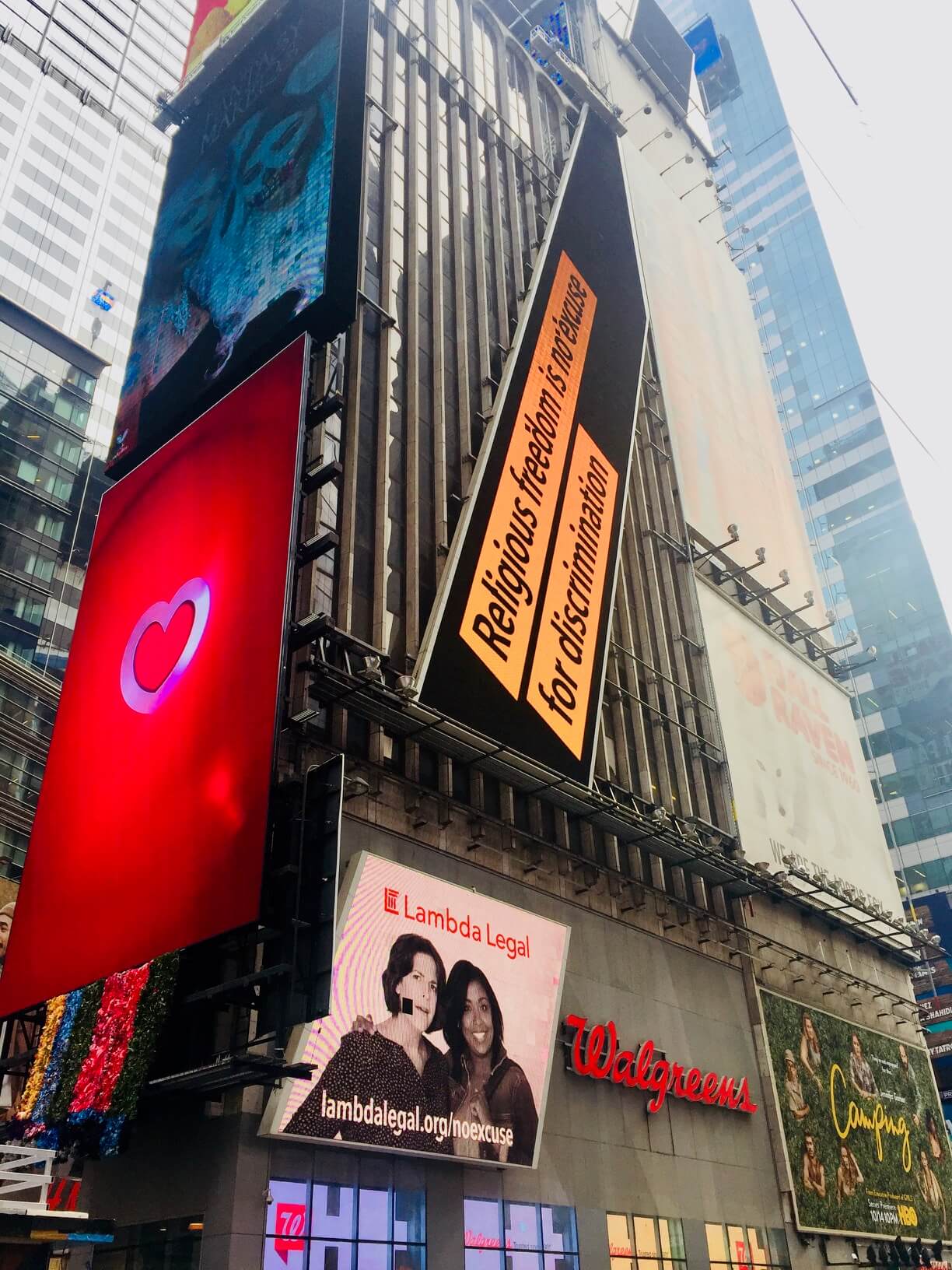 In 2018, 25 states have put forward bills permitting individuals to cite moral or religious objections as a “license to discriminate.” Proposals include allowing people of faith to deny LGBTQ people access to healthcare, block queer and trans students from participating in university clubs, or refuse catering, photography, baked goods, or virtually any other service to same-sex weddings.

If passed, Missouri’s HB 1434 would have replaced same-sex marriage licenses in the state with “contracts of domestic union.” Another piece of legislation in Tennessee, known as the “Natural Marriage Defense Act,” attempted to void marriage equality altogether.

Authored by Sen. Mae Beavers, the legislation would have prevented state agencies from taking any action against county clerks or government officials who decline to recognize the Supreme Court’s 2015 ruling legalizing marriage equality.

Like many of 2018’s anti-LGBTQ state bills, both proposals died. In fact, of the 65 proposals introduced just year, just two found success. Passed within hours of each other, a pair of bills in Kansas and Oklahoma allow religiously affiliated adoption and foster care agencies (e.g., Catholic Charities) to turn away same-sex couples.

But as “religious freedom” bills continue to falter in state legislatures, right-wing activists are increasingly pleading their case to the courts.

In June, the Supreme Court “narrowly” ruled in favor of Christian baker Jack Phillips in Masterpiece Cakeshop v. Colorado Civil Rights Commission. In a 7-2 decision, judges claimed the state’s civil rights board illustrated unjust bias toward Phillips’ faith beliefs in a decision fining him for refusing a cake to gay couple Charlie Craig and David Mullins in 2012. 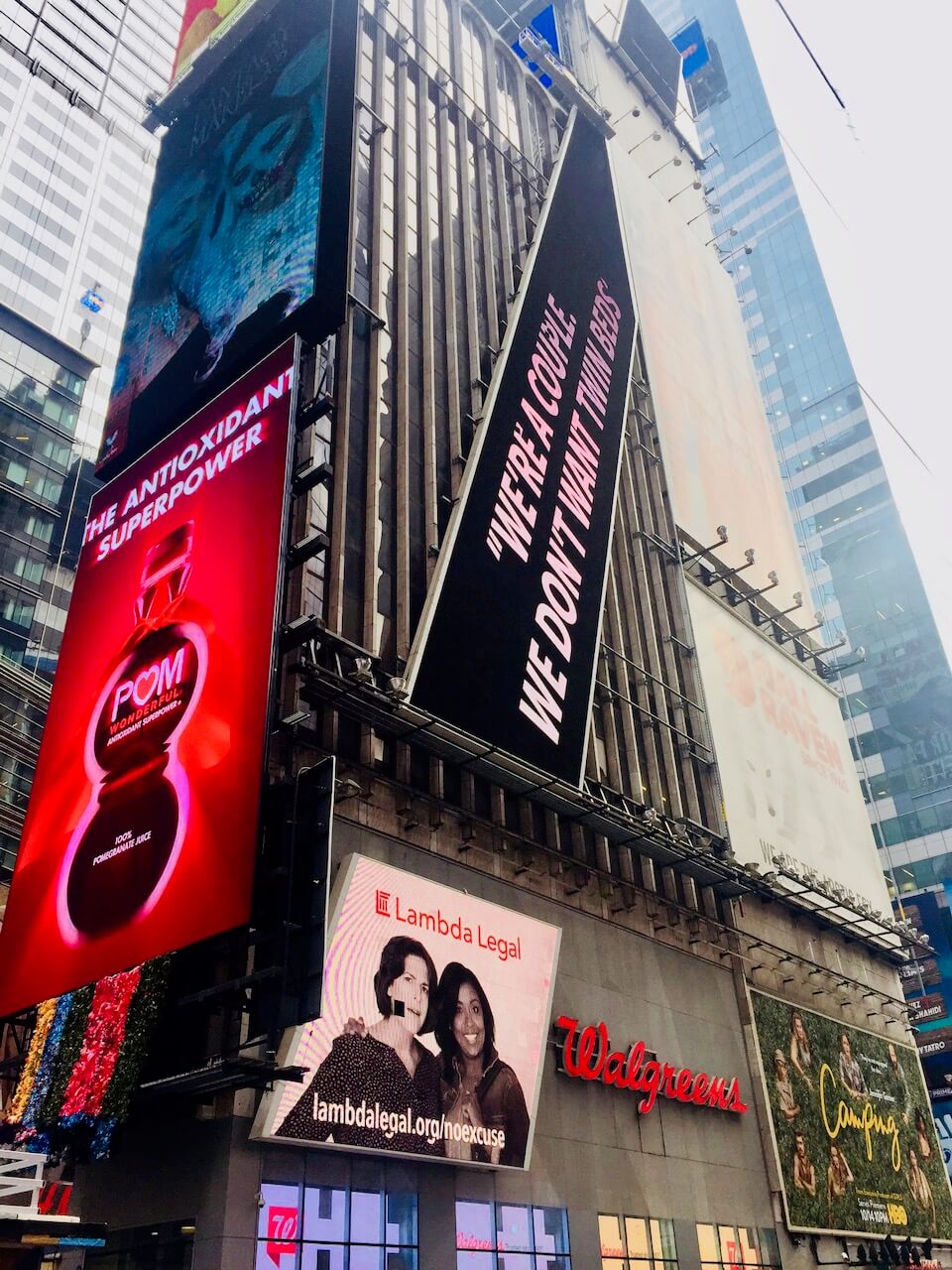 SCOTUS effectively punted the biggest questions surrounding Masterpiece for future court rulings by declining to weigh in on “religious freedom.” But according to Lambda Legal, anti-LGBTQ cases of religious refusal are only growing in number.

“We are seeing an alarming increase in extreme religion-based arguments claiming all sorts of people and businesses are exempt from the rules protecting everyone from discrimination, making those arguments into weapons in a crusade against the LGBTQ community,” claimed Jenny Pizer, law and policy director at Lambda Legal, in a statement.

“Freedom of religion is a core constitutional value of this country but that freedom isn’t, and has never been, a license to harm other people,” she added.

The billboards will run through October 28.