A new report shows that bisexuals are disproportionately likely to live in poverty — with bisexual men significantly lagging behind their gay and straight male peers.

A fact sheet released on Monday by the Center for American Progress found that bisexual men were four times as likely as straight men and twice as likely as gay men to have a household income below the U.S. poverty line. According to the Department for Health and Human Services (HHS), that amounts to less than $12,140 per year for single individuals with no children.

While the discrepancies weren’t quite as dramatic for bisexual women, this population nonetheless faces high levels of poverty. More than one in five bi women (21 percent) report living below the poverty line, as opposed to the 13 percent of lesbians and 14 percent of heterosexual women who say the same. 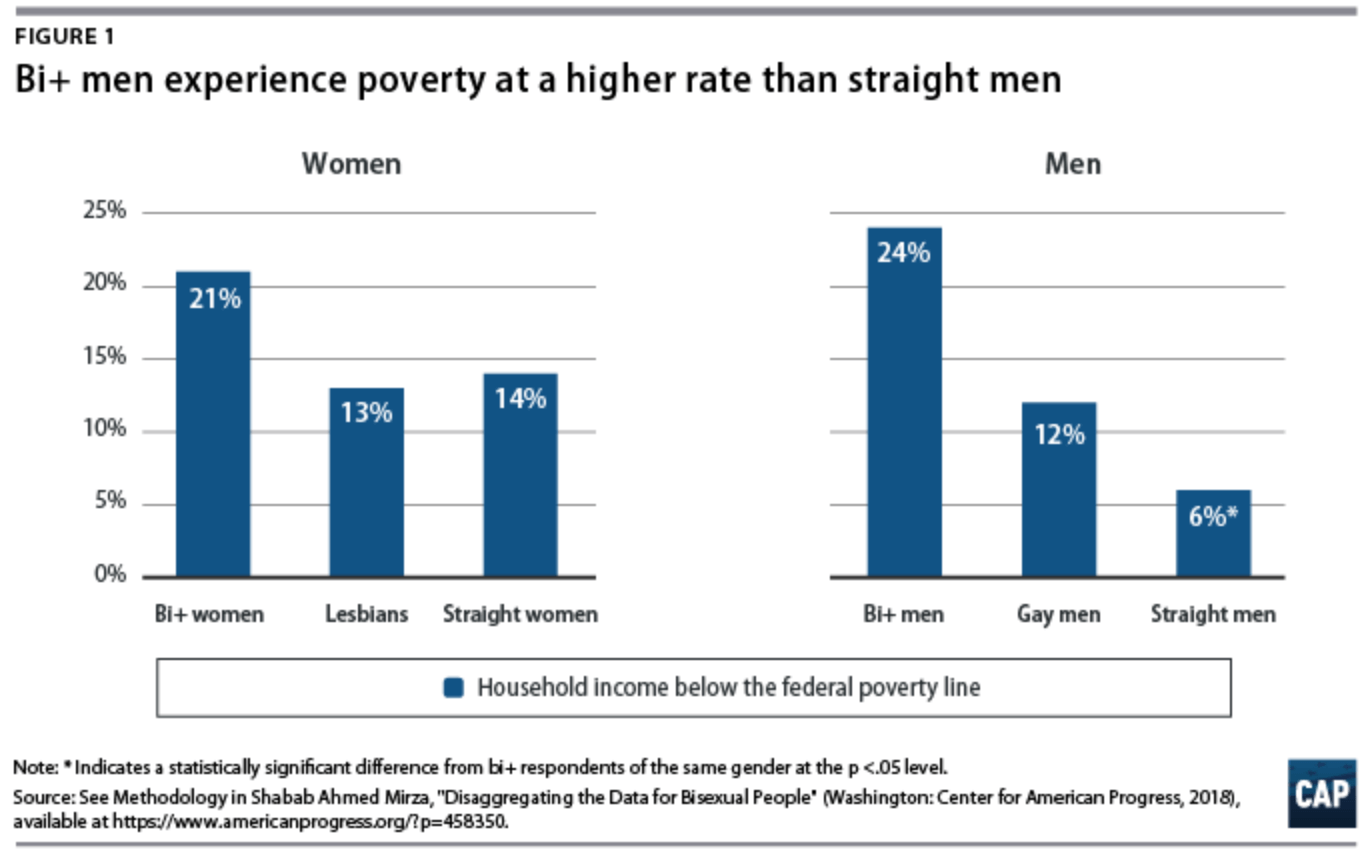 Overall, 12.7 percent of the U.S. population is impoverished, as the U.S. Census Bureau reported in 2016. That amounts to 43.1 million Americans. 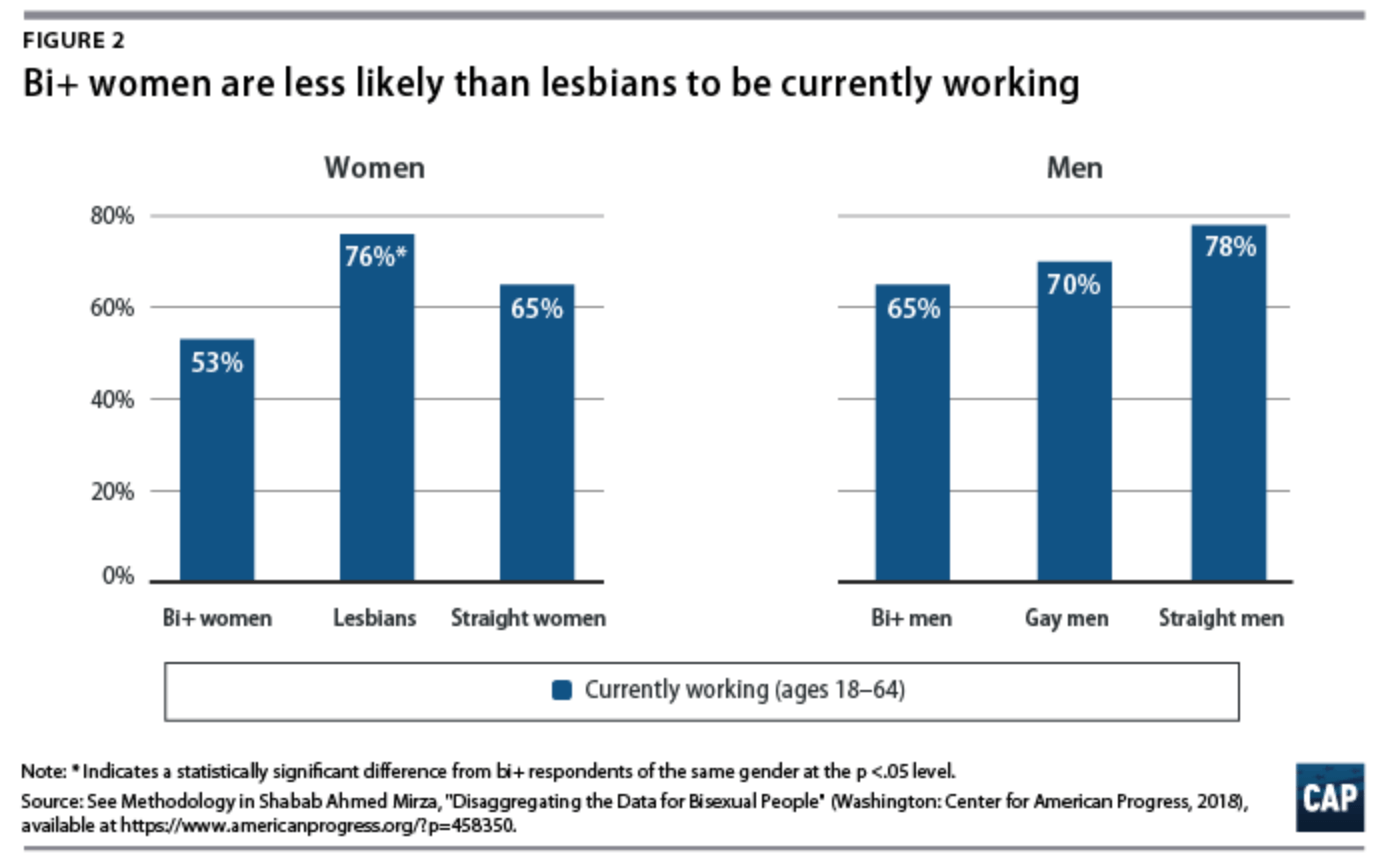 The data — which was released in conjunction with Bisexual Awareness Week — shows that bisexual individuals face unique challenges across the board.

Bisexual females are more than twice as likely as lesbians or straight women to receive public assistance through the SNAP program, more popularly known as food stamps. They are more than three times as likely as self-identified lesbians to serve as a caregiver for a child under the age of 18. 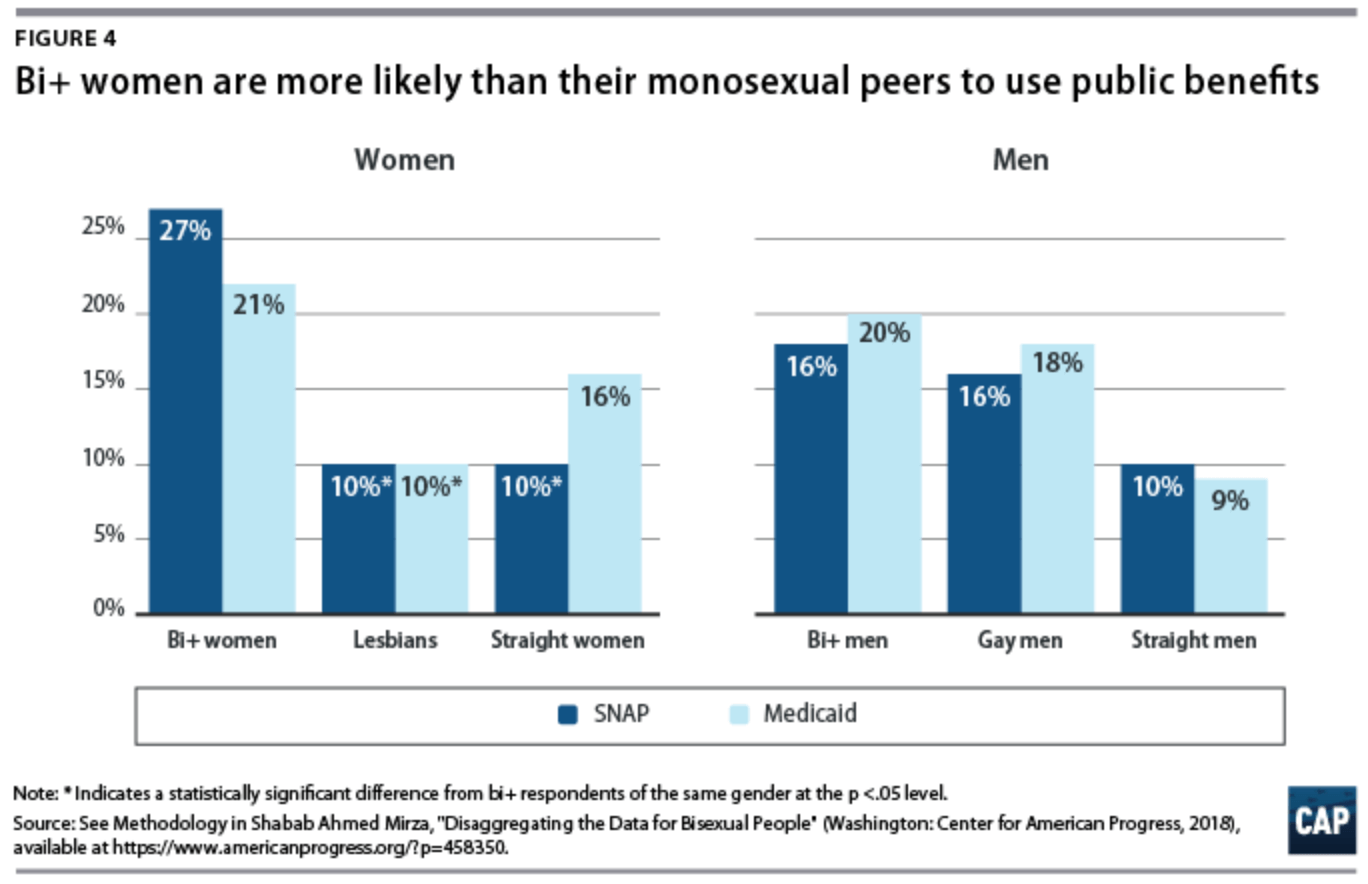 Shabab Ahmed Mirza, a researcher for the left-leaning think tank and author of the fact sheet, claimed these numbers are particularly significant as bisexuals “make up about half of the LGBTQ community.” Mirza isolated the data on bi men and women in order to highlight the particular discrimination they face.

“[G]rouping them together with gay and lesbian respondents obscures key differences in their experiences,” said Shabab Ahmed Mirza, who authored the fact sheet, in a statement. “Considering the data separately can help foster a better understanding of their unique needs and improve our ability to develop policies and programs that effectively serve the community.”

The Center for American Progress report isn’t the first to illustrate that bisexual people are often severely marginalized in the United States, facing high rates of suicidal ideation, violence, and even discrimination from other LGBTQ people.

Data from the Centers for Disease Control in 2010 showed that 61 percent of bi women have experienced intimate partner violence, as opposed to the 35 percent of straight females who say the same. Meanwhile, a 2016 study from Drexel University found that bisexual women were more likely than individuals of any other sexual orientation to have contemplated taking their own lives.

An 2017 report out of American University — which came to the same conclusion on bisexual mental health — cited the “double discrimination” bi people face “in multiple settings.”

“Bisexual people are often invisible, rejected, invalidated, [and] stigmatized in the heterosexual community, as well as the traditional LGBTQ communities,” claimed the study’s lead author Ethan Mereish in a statement. “[…] Given that isolation and discrimination, bi people might be experiencing increase factors that might make them more lonely or isolated.”