Malcolm Kenyatta made history on Tuesday in the face of anti-gay attacks during the wee hours of his campaign.

The 27-year-old won the primary for Pennsylvania’s 181st, making him the first queer man of color to receive the Democratic nomination in the Philadelphia district. Kenyatta faced off against Alex Deering, who is also black and gay, in the race; it was the first time two LGBTQ candidates of color fought in the same primary in the state’s history.

It was, in general, a good night for LGBTQ candidates in Pennsylvania. Six out of the seven candidates endorsed by the Victory Fund, a nonprofit which supports queer and trans political hopefuls, won their respective races.

These included Kristin Seale in the 168 District, which comprises Philadelphia’s western suburbs, and Rep. Brian Sims, who ran unopposed in the city’s 182nd District.

Sims, who was first elected to the state’s House of Representatives in 2012, is the only openly gay man to currently be elected at the state level. If Kenyatta wins in November, he would be just the second in the General Assembly.

A second-generation politician who campaigned for Hillary Clinton’s presidential run, Kenyatta is extremely well-positioned to claim that title. Grandson of civil rights leader Muhammad Kenyatta, he was a delegate at the 2016 Democratic National Convention and has sat on the boards of Equality Pennsylvania and the Philadelphia Chapter of National Organization for Women’s Education Fund.

Kenyatta is set to take on Republican T. Milton Street, brother of former Philadelphia mayor John Street, in the general electionand is likely to win.

The 181st District, which has been represented by Democrat W. Curtis Thomas since 1989, hasn’t had a conservative run for the state House of Representatives in at least six years, and Street was unopposed in the primaries. There’s a reason for the lack of Republican opposition: Philadelphia, the state’s most liberal city, voted 82 percent for Clinton in the 2016 election.

One roadblock to his presumptive victory, however, were flyers distributed in Philadelphia as voters cast their ballots on Tuesday. As first reported by LGBTQ Nation, the one-sheet featured a photo of Kenyatta and his ex-husband embracing on their wedding day crossed out with a giant circle-backslash symbol. “North Philly SAY NO!” says the flyer, which also misspells the candidate’s name. 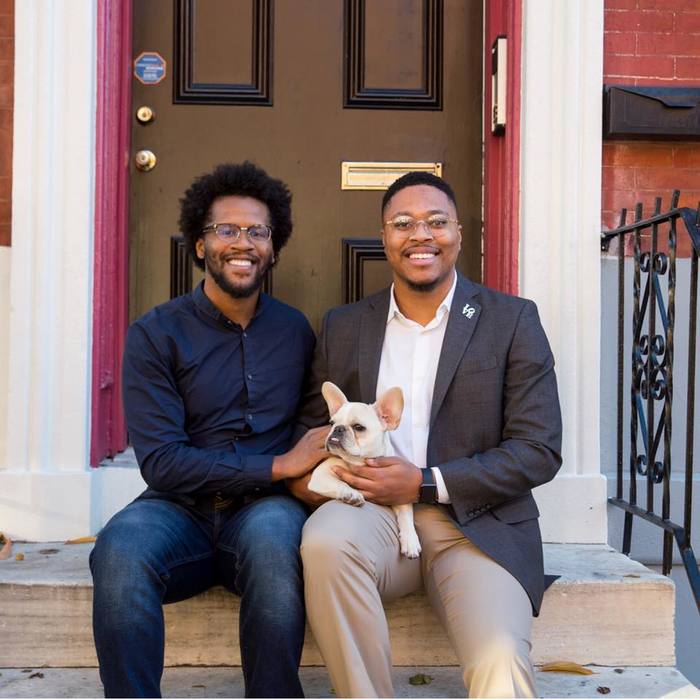 The images were posted to Facebook in memory of the couple’s one-year anniversary.

“Thank you for always being in my corner and for being more than my best friend,” the caption reads. “Thank you for this first year of marriageI look forward to many more.”

Kenyatta’s ex, Terrell Green, posted a message on social media claiming that the political hopeful’s sexual orientation and his private life “should have no bearing” on how Pennsylvania voters cast their ballots on election day.

“I hope the person who is hanging these hateful fliers around the polling places of 181st district gets exposed and held accountable for spreading hate messages on our day that we all vote to have a voice and seat at the table,” Green claimed. “This person took a personal picture from our wedding album and put hate on it!”

It’s clear, though, that the last-minute smear campaign didn’t have an impact on the vote. Kenyatta prevailed in a crowded Democratic field that included Gilberto Gonzalez, Lewis Nash Sr., and Lewis F. Thomas III.

LGBTQ advocates championed Kenyatta’s victory as a sign of things to come.

“With tonight’s victories, we are poised to triple the number of openly LGBTQ state legislators in Pennsylvaniaan important step in moving equality forward in the state,” said Victory Fund CEO Annise Parker. “While these out leaders will be champions for our community, their campaign platforms are about improving the lives of all Pennsylvanians.”

“That is why they won tonight,” she added, “and why they will win in November.”