On Friday, law enforcement authorities arrested 56-year-old Florida resident Cesar Sayoc, saying the registered Republican was the suspect behind a dozen bomb-like devices mailed to a range of prominent Democrats and vocal critics of President Trump.

And in the wake of his arrest, a history of anti-LGBTQ rhetoric and social media activity emerged that gives insight into Sayoc’s personal beliefs prior to allegedly sending bomb-like devices to a number of high-profile liberals.

Social accounts first discovered by NBC News appearing to belong to Sayoc — even containing the same jumble of photos of the suspect — repeated posts of memes attacking some of the mail bomb targets, and strange, rambling written rants. Neither law enforcement nor the social media platforms have officially confirmed that the accounts belong to the suspect.

INTO combed through the Twitter account @hardrock2016, as well as the Facebook profile for Cesar A. Randazzo (shortly before it was abruptly disabled by Facebook), both of which appear to belong to Sayoc. While the majority of Sayoc’s posts were memes about mail bomb targets like George Soros, Hillary Clinton, Congresswoman Maxine Waters, and President Barack Obama, there were several posts referencing LGBTQ people as well.

In a tweet posted this May, a meme features a photoshopped image of Barack Obama in a dress and Michelle Obama in khakis and a button-down shirt, with the phrase “Breaking news: Michelle Obama arrested in North Carolina for trying to use a womans (sic) bathroom.” 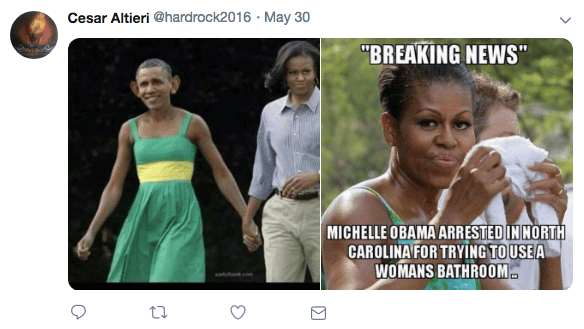 In another post on March 7, a tweet compared Caitlyn Jenner’s identity as a woman to Rachel Dolezal’s identity as Black, among other things, with the caption “No wonder liberals are so confused.” On the same day, the account posted an overwhelming 87 memes in a row — most of which centered on conspiracy theories linking former California governor Arnold Schwarzenegger to the Nazi Party, debunking Senator Elizabeth Warren’s Native American ancestry, and linking prominent Democrats to the KKK and ISIS. 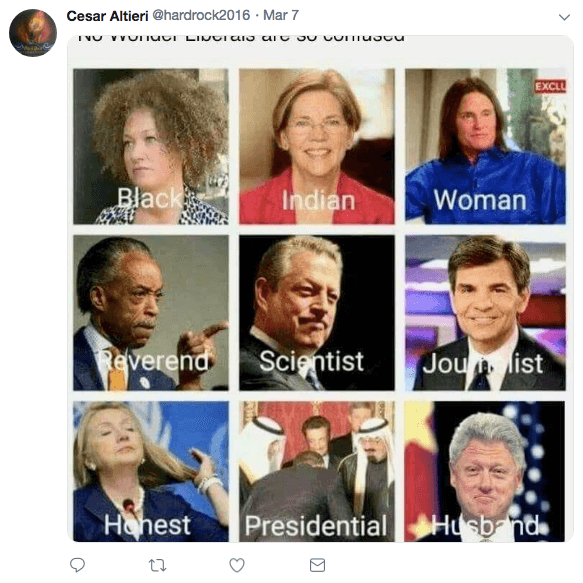 Other posts referencing LGBTQ people or issues include a meme lumping in out lesbian MSNBC host Rachel Maddow and gay CNN host Anderson Cooper with the “swamp” that needs to be drained, a meme suggesting filmmaker Michael Moore supports the ISIS executions of gay men, and a tweet accusing Women’s March speaker Donna Hylton of the torture and murder of a “60 year old homosexual man in 1985.” 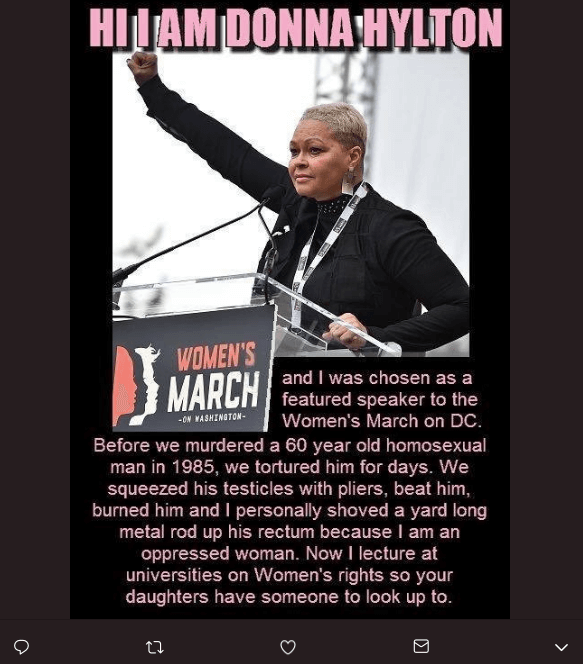 Sayoc is charged with five federal crimes and faces up to 58 years in prison, according to Attorney General Jeff Sessions, who spoke alongside the FBI and other officials at a press conference on Friday. Sessions listed those federal charges as “interstate transportation of an explosive, illegal mailing of explosives, threats against former presidents and certain other persons, threatening interstate communications, and assaulting current and former federal officers.”

At the same press conference Friday, FBI Director Christopher Wray addressed online conspiracy theories that questioned whether the mail bombs were real, saying “Thirteen IEDs were sent to various individuals across the country. Each device consisted of roughly six inches of pvc pipe, a small clock, a battery, some wiring and what is known as energetic material [explosive material]…these are not hoax devices.”

The Washington Post reported late Friday that Sayoc had a history of violent rants about gay people. In an interview with the newspaper, Sayoc’s former manager at Fort Lauderdale’s New River Pizza & Fresh Kitchen — where Sayoc was a delivery driver until January — referred to him as “crazed.”

Debra Gureghian, the pizza restaurant’s general manager, said Sayoc’s coworkers were disturbed by his comments and that the restaurant asked him to park his now-famous van out of the sightline of customers. The van, said Gureghian, was covered in “anti-gay symbols” in addition to racist and violent imagery of various kinds.

“He was very angry, and angry at the world, at blacks, Jews, gays,” Gureghian told the Washington Post. “He always talked about ‘if I had complete autonomy, none of these gays or these blacks would survive.’ He never said he would kill them or murder them or bomb them, he just said, ‘If I had complete autonomy the gays, the black and Jews would not survive.’ He was very, very strange.”

Gereghian was later interviewed by CNN where she recounted the anti-LGBTQ sentiments again and most strikingly discussed how Sayoc verbally attacked her for being a part of the community as well.

“He knew I was a lesbian and a very proud lesbian,” she shared on live-broadcast, “and he made it a point to tell me that, you know, God had made a mistake with me and that I should burn in hell.”

Sayoc left this job in January after telling his employers that he had gotten a new job in North Carolina driving a hazardous materials truck.

INTO has spoken with Gureghian and others close to Sayoc and will be updating our reporting throughout the weekend as more details emerge.