Within the next 24 hours, anti-LGBTQ groups in Taiwan are expected to make a major announcement: They have reportedly collected enough signatures to put a referendum banning marriage equality on the ballot in November.

Last year the Council of Grand Justices ruled that sections of the Taiwan Civil Code limiting marriage to one man and one woman violate the constitution. But unlike the U.S. Supreme Court’s Obergefell decision, the landmark ruling did not serve to legalize marriage equality in the self-governing Chinese territory. The court merely offered its legal opinion.

Instead judges gave the legislature two years to either amend the civil code or draft a separate law allowing LGBTQ couples to wed. If the government did not act before that time, marriage equality would automatically become the law of the land.

Although lawmakers have yet to follow up by passing a same-sex marriage bill in the Legislative Yuan, critics of the ruling responded with their own proposal. Back in April, anti-LGBTQ groups met the preliminary requirements to begin gathering signatures for a referendum banning marriage equality.

The Happiness of the Next Generation Alliance — the organization spearheading the referendum — has been working tirelessly for four months toward that goal. To put an issue on the ballot in Taiwan, individuals or groups proposing a statewide referendum are required to gather 280,000 signatures. That total amounts to 1.5 percent of the overall electorate.

When INTO spoke to Jennifer Lu, campaign director for Taiwan’s Marriage Equality Coalition, on Thursday evening, she claimed anti-LGBTQ groups had gotten the signatures they needed to put the issue up for a public vote.

“As long as the election committee certifies them, this campaign will start,” claimed Lu, a longtime LGBTQ rights activist in Taiwan. “The deadline to present those signatures is the end of August. The committee has one month to check those signatures. We will know in early October.”

Given such support for the petition, INTO asked Lu if she believes opponents of marriage equality will be successful in their ultimate goal of outlawing same-sex unions. She said it’s difficult to speculate because the current predicament is so unprecedented in Taiwan’s history.

“It’s a pretty new situation,” Lu claimed. “We don’t have any previous experience to predict a referendum result here. This is a major challenge for Taiwan’s democracy and our civil society.”

Should the election committee approve the signatures in October, it would represent an auspicious first for the island of 23 million: The East Asian state has never voted in a referendum of this stature. Amendments to Taiwan’s Referendum Act earlier this year allowed private citizens to propose issues for a nationwide vote, whereas previously such decisions were made exclusively by political parties.

Other changes included reducing the requirements on voter turnout in national referenda. Twenty-five percent of eligible voters are required to turn out to the polls before the government deems the result a meaningful reflection of public opinion. Before January, the voter minimum was 50 percent.

The dramatic drop was a gift to marriage equality opponents after turnout in the 2016 presidential election was the lowest in 20 years.

Lu claimed meeting the requirements for voter turnout is why getting the issue on the ballot in November is so pivotal for opponents of same-sex marriage. That month Taipei will also hold local municipal elections in its mayoral and city council races. Akin to the presidential midterms in the U.S., the outcome is the first chance Taiwanese voters will have to symbolically sound off on President Tsai Ing-wen’s rocky first term. 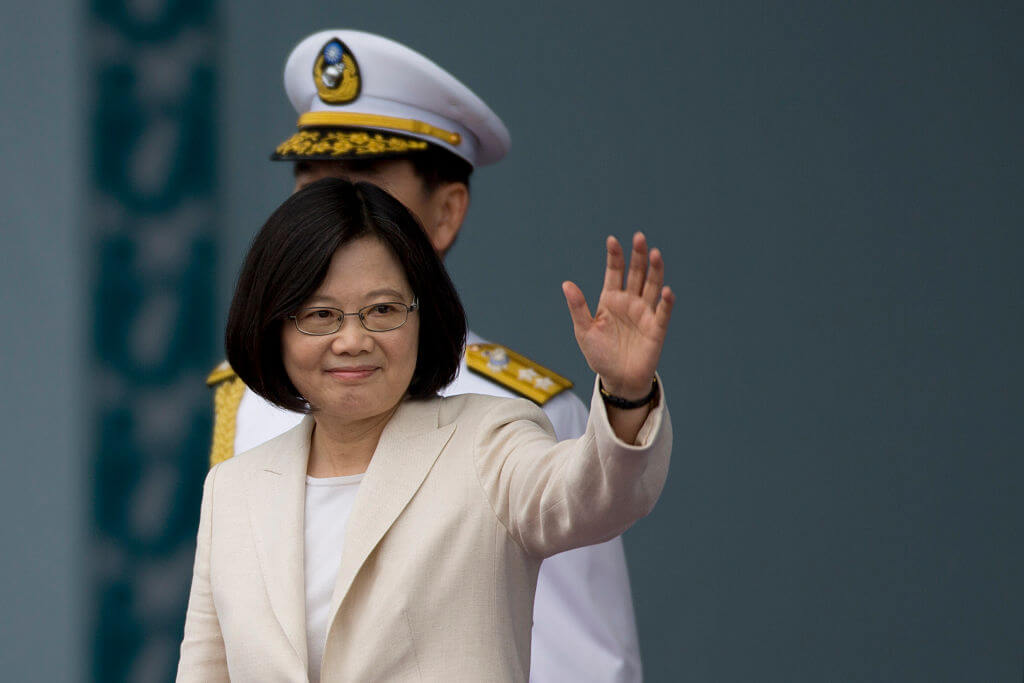 The Democratic Progressive leader took office in 2017 with sky-high approval ratings: After being voted in as Taiwan’s first female president, Tsai boasted the support of 70 percent of Taiwanese. But following criticism over her attempts to reform labor laws and a sluggish economy, polling numbers bottomed out at 26 percent this year.

Should the marriage question be tied to such a pivotal election, turnout is likely to be high — well over 25 percent. Such numbers would guarantee the result stands, a few short months before the constitutional court deadline approaches in May 2019.

“This referendum is the last shot to stop marriage equality in Taiwan,” Lu said. “The opposition campaign has been preparing for this referendum for about a year.”

Organizations backing the referendum include the Citizens Coalition to Safeguard Taiwan, itw999 Group, and the Taiwan Civil Rights Solidarity Organization.

The groups filed a series of petitions to overturn the ruling earlier this year.

“There were numerous illegalities and a clear violation of the law in the process that resulted in the issuance of last year’s Constitutional Interpretation No. 748,” claimed Chang Shou-yi, secretary-general of the Alliance of Taiwan Religious Groups for the Protection of the Family. “Also, the interpretation and the reasons given by the Council of Grand Justices in its ruling contravene articles of the Constitution.”

As the second petition was filed on Feb. 13, marriage equality protesters stood outside the courthouse holding signs calling the constitutional court ruling “discriminatory.” Demonstrators claimed the embrace of LGBTQ rights results in “no freedom of speech and no religious freedom.”

The motions for appeal were denied.

In seeking to overrule the Council of Grand Justices ruling, these groups have received the support of American hate groups seeking to export bigotry abroad. Brian Brown, president of the National Organization for Marriage, recorded a message to referendum supporters in January — proclaiming what a “blessing” it was to be in Taipei fighting for the “truth of marriage.”

“It’s critical in this situation where the courts have attempted to redefine marriage that the people stand up for the truth of marriage and that there is true democracy — a public vote,” Brown claimed.

The National Organization for Marriage was one of the key lobby groups which fought for the passage of Proposition 8 in California. That referendum, which prevailed by a four-point margin in 2008, was the first in the U.S. to overturn a court’s statewide marriage equality ruling at the ballot box. The vote was later thrown out in district court, however.

Accompanied by subtitles translating his message into Mandarin, Brown claimed Taiwanese voters could set a similar precedent in Asia.

“I encourage you to stand up and do the same and make sure your voice is heard,” he said, stumbling over his words ever so slightly as an upbeat pop song swells in the background. “Support the referendum. Vote ‘Yes’ to protect marriage in Taiwan.”

Either result in November’s election would be historic for the continent. If Taiwan follows the example of countries like Ireland and Australia in legalizing marriage equality via national referendum, it would be the only jurisdiction in Asia to offer full relationship recognition rights to LGBTQ couples. Currently, Armenia and Israel recognize same-sex marriages performed in other countries.

Otherwise, it would become Asia’s first jurisdiction to vote against marriage equality.

Cameron Tolle, an advisor for Freedom to Marry Global, claimed the stakes couldn’t be higher in Taiwan’s upcoming elections.

“I would imagine that most countries in Asia are keeping a very close eye on what’s happening in Taiwan,” Tolle told INTO over the phone. “I think that if and when we win marriage in Taiwan, there will definitely be a ripple effect. That will carry over to a lot of other countries as an example of what’s possible when people get to know their LGBTQ neighbors, friends, and family members.”

But if enough weren’t on the line already, Taiwanese voters may weigh in yet on another issue in November should anti-LGBTQ groups be successful.

Referendum supporters are actually putting forward three proposals in total, two of which relate to marriage equality. The aforementioned first proposal would ban same-sex marriage entirely, while the second would create a second category for same-sex couples — similar to domestic partnerships or civil unions.

The third proposal, however, concerns LGBTQ inclusion in schools.

Anti-equality activists argue “elementary and junior high schools should not initiate ‘gay and lesbian education’” under the terms of the “Enforcement Rules for the Gender Equality Education Act.”

Enacted in 2004, the Gender Equality Education Act was intended to combat discrimination against students based on their sexual orientation or gender identity. The law tasked schools with forming “gender equity education committees” to further the teaching of queer- and trans-inclusive materials in the classroom.

Religious groups have vehemently opposed the groundbreaking legislation since its passage nearly 15 years ago.

When an LGBTQ-affirming sex ed lesson went viral last year, the Happiness of the Next Generation Alliance and the Alliance of Taiwan Religious Groups for the Protection of the Family — two of the myriad groups backing the referendum — argued schools were forcing “improper sex education” on children at “an unsuitable age.”

But despite the ever-persistent backlash from equality opponents, Taiwan remains one of the continent’s most progressive countries on LGBTQ rights.

Taiwan finalized a statewide ban on anti-gay conversion therapy in February 2018, making it one of just a handful of jurisdictions outlawing the discredited “gay cure” treatment. This year the federal government also announced it would be rolling out a third gender option on passports and identification cards, following a similar decision by Nepal three years earlier.

While reaction to the Council of Grand Justices ruling was “pretty positive,” she said many misunderstood the decision.

“They thought we could already get married already,” Lu claimed, adding that the misunderstanding presents a major challenge to those working to further LGBTQ rights: “If people think we can get married already, they don’t have the motivation to fight for the referendum.”

Over the next three months, marriage equality supporters will be embarking upon a campaign to educate the public about the constitutional court’s ruling, as well as what’s at stake in the November election.

A key component of this effort will be reaching out to youth, many of whom won’t have the chance to cast a ballot in other elections due to aforementioned amendments in referendum laws. While the voting age is 20 for municipal races, the minimum age to vote in statewide referenda was lowered to just 18 years old.

Given that young people are more likely to support LGBTQ rights than their elders, the change was a major boost to the equality campaign’s chances.

As LGBTQ activists wait for the referendum to move forward, Lu remains hopeful.

“I don’t know how to predict the result, but I can only hope we will try our best to win the campaign,” Lu said. “I believe we have very strong supporters and international support. We can make it.”