CrossfFit Chief Knowledge Officer Russell Berger is under fire after tweeting in support of an Indianapolis, Indiana location that canceled a Pride-themed exercise event.

“Thank you #CrossFitInfiltrate for standing by your convictions and refusing to celebrate sin by hosting an @indypride workout,” Berger tweeted. “The intolerance of the LGBTQ ideology toward any alternative views is mind-blowing.”

Berger has deleted the tweet, but the screenshot circulated Wednesday afternoon. 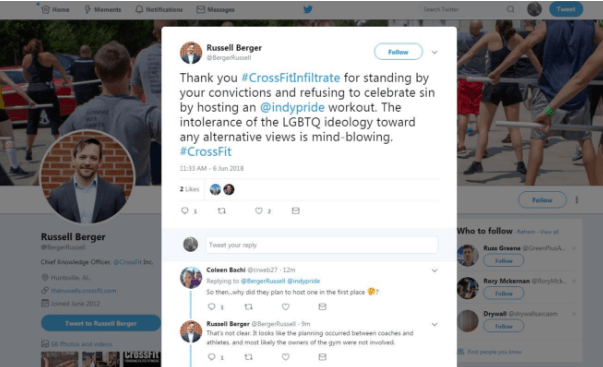 In a follow-up tweet, Berger said that Indy Pride is a “celebration of sin.”

it looks like crossfit execs are celebrating pride month a little differently than other corporations pic.twitter.com/k1HGPm8PRA

In an email to members of the local Indianapolis gym, owner and coach Brandon Lowe explained that the gym canceled the event because, “We believe that true health forever can only be found within humility – not Pride.”

In a statement to local affiliate RTV6, Lowe said, “The gym has a history of welcoming and serving people training to be fit.” and “The gym never has and never will be anything but welcoming to all human beings who live, move and breathe and God’s world.”

According to RTV6, members began to cancel their memberships after receiving an email that the event was canceled.

“I quit my membership within an hour of receiving the email,” member Becca Kimball said. “I didn’t wanna be associated with a discriminatory organization.”

CrossFit has previously drawn the ire of the LGBTQ community when it banned a transgender woman from competing with other women in a fitness competition.

Several people expressed their dissatisfaction with Berger and CrossFit on Twitter.

Hey @BergerRussell why did you delete your bigotry tweet toward the LGBTQ community? I’m ashamed to own an affiliate right now because of you, you disgusting piece of trash. pic.twitter.com/zVFXDi9waI

According to BuzzFeed, CrossFit placed Berger on unpaid leave following his comments.

In a statement on the company’s Twitter, the CEO of CrossFit said, “I am crazy proud of the gay community in CrossFit.”

“I am crazy proud of the gay community in CrossFit.”

INTO has reached out to Indy Pride for comment and will update this story should they respond.