Last Saturday, an 18-year-old high schooler from Parkland, Fla. stepped up to the podium at a rally to support Firearm Safety Legislation, and her careful, courageous words on gun control rang through to millions of Americans and people around the world. With her head shaved bald, her tearful passion, and her facts about the ease in which Floridians like the one who shot her schoolmates at Marjory Stoneman Douglas High School, can obtain, Emma González became an icon.

Despite the numerous amounts of school shootings that have happened over the last year (approximately 18 since January 1, 2018), González and her peers’ forthcoming forcing the issue in the media and with legislators has made the issue unavoidable.

“If the President wants to come up to me and tell me to my face that it was a terrible tragedy and how it should never have happened,” she said during her speech, “and maintain telling us how nothing is going to be done about it, I’m going to happily ask him how much money he received from the National Rifle Association.”

Since delivering a speech she prepared with one night’s notice, González has become gun control advocates’ most sought after talking heads; a bisexual activist who has been advocating for causes she believes in as the president of Marjory’s GSA. She’s had to start a Twitter account (already verified) because she’d caused so much conversation. Public figures, celebrities, and everyday people were sharing thoughts and links; thinkpieces were spawned, donations made, and most of all, there is hope for change. 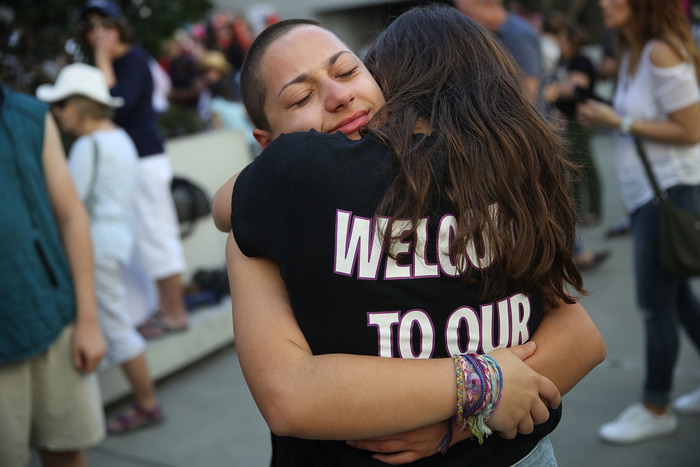 “Dana Loesch, I want you to know that we will support your two children in the way that you will not,” she began, somewhat nervous. “The shooter at our school obtained weapons that he used on us legally. Do you believe that it should be harder to obtain the semi-automatic weapons and the modifications for these weapons to make them fully automatic like bump stocks?”

Loesch’s response was patronizing and largely ignored González’s question altogether. Those in the room screamed and booed, and González, with a renewed strength, urged them to stop: “You guys, if I can’t hear her statement, I can’t come up with a rebuttal.” As Loesch went on to talk about “crazy” people obtaining guns, González pressed on, and eventually, Broward County Sheriff Scott Israel pointed out that Loesch claimed to support the people in the room, but was ultimately failing them unless she demanded less weapons to be obtainable.

Perhaps González is unfazed by the likes of Loesch and other detractors because, unlike false reports that she and her fellow surviving students are hired actors in some part of conspiracy theory, she is actually concerned about the safety of teens just like her; and of Americans who now live in fear of going to shopping malls, movie theaters, or their day jobs because the Second Amendment is more precious to NRA members and the politicians they fund. Benjamin Kelly, the district secretary for Representative Shawn Harrison, reportedly liked a tweet that referred to González as a “brown bald lesbian girl.” (Kelly has since been fired.)

González is not deterred. She’s taking calls from Demi Lovato; speaking with Anderson Cooper on live television. Overnight, she’s turned into the face of gun control, and her being a brown bald bisexual woman is not a deficit, as some might decide–instead, an incredible talisman that seems to indicate the kind of power those of us deemed powerless truly have. That despite the Trumps of the world telling minorities how worthless we are, over and over again; that QPOCs and women are not even low priority but instead targets, we will not recoil while sheepishly raising white flags.

Emma González is the portrait of empowerment, and she’s inspiring a movement that includes us all; one that is not asking for, but demanding a safety that is no longer promised or assured by current administration. And as she continues her advocacy into the March For Our Lives on March 24, it appears the NRA might have finally mets its match in a teenage girl.

“This is my whole world now,” she told The New York Times. “I cannot allow myself to stop talking about this.”