Marjory Stoneman-Douglas student Emma González has been one of the most outspoken survivors of the Parkland, Florida massacre. She made a rousing speech at March For Our Lives this weekend, and on Sunday, she told Yahoo her sexuality has a direct correlation to her activism.

“They’re definitely linked for me personally. If I wasn’t so open about who I was I never would’ve been able to do this,” González toldYahoo.“In ninth grade, I was in a creative writing class where I could actually really effectively communicate what I was feeling, and it especially helped me come to terms with who I was. That definitely was when I really understood who I am, and when I came to terms with it, and when I told most people.”

The teenage student said being out “helped [her] understand that everybody, no matter who they are and what they look like, is going through a lot of different things.”

The bisexual activist has found herself in the center of national attention since her galvanizing “We call BS” speech following the shooting at her high school. This weekend, González stood in silence in front of hundreds of thousands of D.C. marchers for six minutes and 20 seconds, the exact amount of time it took for the shooter to slaughter 17 of her classmates.

Cathy Marino-Thomas, a Gays Against Guns (GAG) organizer and longtime advocate for marriage equality, agreed that members of the LGBTQ community are likely to advocate for other social causes, too.

“We have always been on the defensive as a community. So it’s a natural fit. We have been fighting for our rights for decades, likely eons,” Marino-Thomas told Yahoo Lifestyle. “I think that we are a community less afraid to stand up because, in many ways, we have less to lose and everything to gain. Historically, no one has ever stood up for the gays. We’ve had to stand up for ourselves, often against extraordinary opposition.”

Gonzalez’s activism started early. While many have been quipping, “Emma for president,” the student revealed that she’s already the president of her school’s Gay-Straight Alliance (GSA). She believes her time as president actually helped prepare her for this spot on a national stage.

“It’s really helped me get used to shifting plans very quickly, planning in advance, and also being flexible understanding that maybe you organize a club meeting with this one person in mind and they just don’t come because they aren’t coming to school, and you can’t get upset,” González said. “Because most of the kids in GSA either have depression or they’re dealing with a lot of stuff at home, and I can understand that. And there are so many people in the country who are dealing with that, in relation to gun violence. You have no idea. You don’t know how many people you talk to on a daily basis that have actually been shot before, or have lost someone through gun violence. With GSA it’s the same. Everything’s incredibly far-reaching and widespread.” 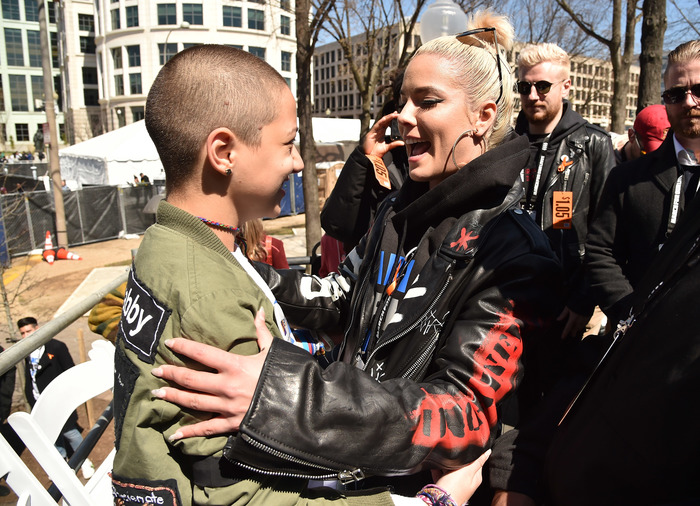 At the mere mention of GAG, who sent members to Parkland after the shooting to voice their support for the teens, González said, “Yaass!” In addition to the organization, Gonzalez cites transgender activist Sylvia Rivera, a Stonewall uprising veteran, as her latest LGBTQ inspiration.

“There’s this clip of her getting up onstage at one of the Stonewall Pride rallies, a couple years [after the uprising], and everybody boos her because she’s trans. But she’s like, ‘Are you kidding me? You’re gay. I’m trans. We’re part of this. Like, I got you here. How many times have I had to fight for you? And you’re booing me because I’m trans?’” González said. “First of all, it was so unfair, unjustified, undignified, like, I was so infuriated by seeing that. But then there’s just knowing that there will always be people that hate you, and that they’re always going to be wrong. So it’s good to use that, and remember that whatever you’re doing, if it’s making people that mad, then it’s probably a good thing.”

Jaclyn Corin, González’s fellow survivor and activist, names the LGBTQ community as an inspiration for her activism, too.

“As things get more acceptable in society, like legalizing gay marriage and stuff like that, it shows us that a change from the beginning that seemed so far away can actually happen in the same lifetime. So that gives us hope,” Corin said. “We’re kind of modeling this like the LGBT movement because, in retrospect, it’s the same. We’re working towards a common goal as a lot of people and it’s not party-oriented. That’s marriage, and this is lives.

González and her peers are blazing the trail for the conversation on gun reform, and she knows it. In fact, she thinks her generation is teaching the older ones how to make real change.

“One of the main things to be learned is that a lot of people kind of get pushed into an agenda, like Republican or Democrat. But the best way to get things done is to appeal to both sides, and listen, which is what we’ve been doing,” she said. “And this is not to knock anyone else, but what we’ve been really focused on is inclusion, and trying to really combine these communities spread around the United States. We’ve been trying to get everyone on the same page, to figure out what everybody’s asking for, and see if we can, as a giant movement, ask for that together.”