On Saturday, Swaziland (recently renamed eSwatini) hosted its first ever Pride in the capital, Mbabane, under the slogan “Turn Hate Into Love.” The event went off without any issue or violence, seeing hundreds of participants march through the streets with rainbow flags and banners.

In April, local LGBTQ organization Rock of Hope began the process of organizing Pride, according to The Daily Beast. The group, operating in the country since 2012, partnered with international LGBTQ rights groups All Out and the Human Rights Campaign as well as regional groups to plan the event.

The Southern African country still has a British colonial-era anti-sodomy law on the books and same-sex partnerships are technically illegal; however, prosecutions are unheard of. Individuals may face social exclusion, according to a United States State Department report, though there is not widespread physical violence against people identifying as LGBTQ.

eSwatini’s King Mswati, the last absolute monarch on the African continent, has reportedly called homosexuality “satanic,” while the country’s Prime Minister has called it a “sickness.” The country’s chief police communications officer told his churchgoers a week before Pride, according to The Swazi Times, that, “We say no to homosexuality, this country will not tolerate the LGBTI community.”

However, the government did not interfere with the organizing of the event, though activists were prepared in case it was banned or the authorities made things difficult. There had been some anti-LGBTQ articles in the local press calling for the organizers to stop planning it.

When it came down to it, though, Saturday’s march was a unique experience for the country of 1.3 million people that reportedly has no LGBTQ-specific bars or hangouts.

“The right time will never come,” Melusi Simelane, the communications officer for Rock of Hope, told the BBC. “It is an issue of being courageous enough. So we decided if no one is going to do it, we would.”

“People will call out some anti-LGBT things at me on the street, and we have heard of violent threats, but at this stage, that’s not going to affect the march on the day. Some people are against us, but I literally have no fear,” Simelane said, according to The Daily Beast.

The U.S. Ambassador to eSwatini, Lisa Peterson, voiced her support to BuzzFeed News, telling the outlet that Pride taking place in more conservative places could be understood as an “affirming signal to the rest of the world.” 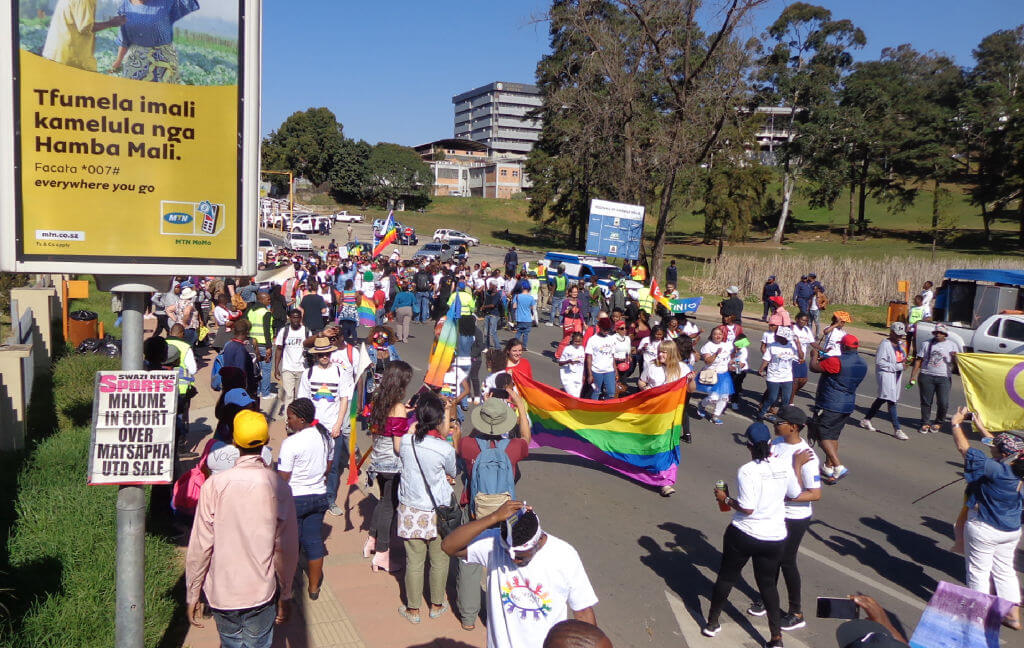 Lusanda Mamba of the Coalition of African Lesbians, a group that helped plan the Pride, told the outlet that she’s happy the conversations around LGBTQ lives is happening in eSwatini.

“Now, with a spotlight and scrutiny, Swaziland might actually have to review, stand, and make an affirmative decision about whether they accept us or not,” she said.

At the end of it all, it looks like eSwatini had its first successful Pride. All Out posted an image to its Twitter account Sunday commenting that the press not only provided photos of the event but also positive reporting.

“The biggest shout out today goes to the LGBT+ community of eSwatini. You have shown the world that love always wins. You have made history,” Matt Beard, Executive Director of All Out, wrote in a Medium piece following the Pride.

Swaziland Pride made the front page on both national newspapers on Sunday. The press, that had been mostly critical of the Pride before, reported positively and showed lots of photos from the march. Changing hearts and minds! #eSwatiniPride #SwazilandPride #Pride pic.twitter.com/CgfGIqUSEu

Other participants also celebrated the historic day for the country. Melusi Mndzebele told BuzzFeed News that Pride is what was needed for the LGBTQ population.