It’s a bad week to be Kirk Humphreys.

The former mayor of Oklahoma City ignited a firestorm of controversy on Sunday night when he compared gay men to pedophiles in a bizarre televised debate. Humphreys appeared on Flash Point, a Hardball-style segment that airs on local news station KFOR-TV, to discuss the allegations against Sen. Al Franken (D-Minn.), who resigned last week following allegations of groping or sexual misconduct by at least eight women.

The Republican came to Franken’s defense by asking why Democrats didn’t call upon Rep. Barney Frank (D-N.Y.), who is openly gay, to resign along with the former SNL comedian.

“So you’re asserting that there’s a right and wrong, and that people’s personal behavior matters in their public standing, and yet you defend Barney Frank,” Humphreys argued in a heated discussion with Democratic State Rep. Emily Virgin. “Is homosexuality right or wrong? It’s not relative. There’s a right and wrong.”

“If it’s OK, then it’s OK for everybody and quite frankly it’s OK for men to sleep with little boys if it’s OK,” he continued. 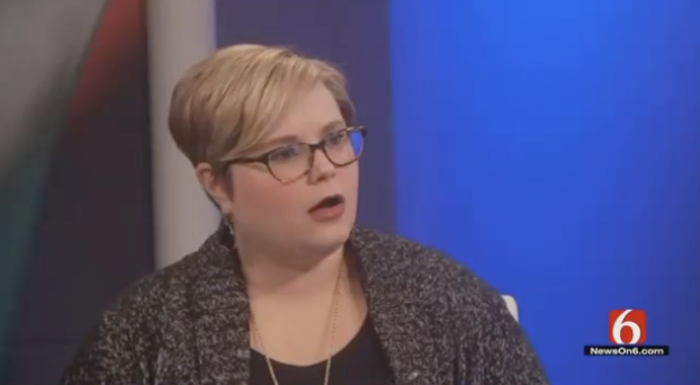 Virgin, an outspoken LGBTQ ally, was visibly shocked by the apparent non sequitur.

“I’m unclear on what Barney Frank did other than being a homosexual,” she responded in dismay. “Are you saying there was some inappropriate conduct on his part? Because I’m not aware of that.”

Those comments were met with near-universal condemnation, even despite Oklahoma’s reputation as a conservative state that’s often less than friendly to LGBTQ rights. The state legislature introduced a record number of bills attacking queer and transgender people in both 2015 and 2016, more than any other state in history. This year legislators debated passage of an anti-trans bathroom bill nearly identical to North Carolina’s controversial HB 2.

After Sunday’s episode of Flash Point aired, the station quickly distanced itself from Humphreys’ remarks. “Neither the host nor the analysts or guests speak for KFOR and the sponsor of the program,” the news program said in a press release.

Virgin called the comments “disgusting, offensive and just plain wrong” in a Facebook post, while University of Oklahoma Press Secretary Matt Epting claimed that Humphreys, who sits on its board of regents, “wasn’t speaking on behalf of the University of Oklahoma.” The college’s student body president, J.D. Baker, called Humphreys’ statement “ignorant” and “outright disrespectful.”

“It gives us hope and shows the level of work that’s been done here,” he continues in a phone interview. “For it to have taken this blatant and horrific of a comment for some of these folks to have responded is unfortunate, but we’re glad they responded.”

But perhaps the strongest condemnation of Humphrey’s remarks has come from his own son.

Blair Humphreys, an urban developer in the capital city, emailed Freedom Oklahoma on Monday to say that his father’s comments are not “reflective of [his] own views.” “I wanted to reach out personally and let you know that I am sorry for my father’s unfair and hurtful comments,” the younger Humphreys said in a message to the advocacy group.

In response to the backlash, Humphreys has claimed that his remarks were misunderstood.

“I regret that my comments regarding homosexuality were not clear and led some people to believe that I was equating homosexuality with pedophilia,” he said in a statement. “That was not my intention or desire.”

Humphreys, who sat in the mayor’s office between the years of 1998 through 2003, once attempted to block local LGBTQ organizations from hanging Pride banners along Classen Bvld., one of the main thoroughfares running through downtown Oklahoma City.

Freedom Oklahoma, which was then known as the Cimarron Alliance, had to file a lawsuit in 2002 to fight for its right to hang the displays.

LGBTQ advocates won that court battle, but Stevenson says that the mayor “fought very hard to keep [them] from putting up those Pride banners.” Humphreys claimed that queer and trans rights groups weren’t entitled to freedom of speech and expression, claiming that the flags amounted to “paid advertising.” 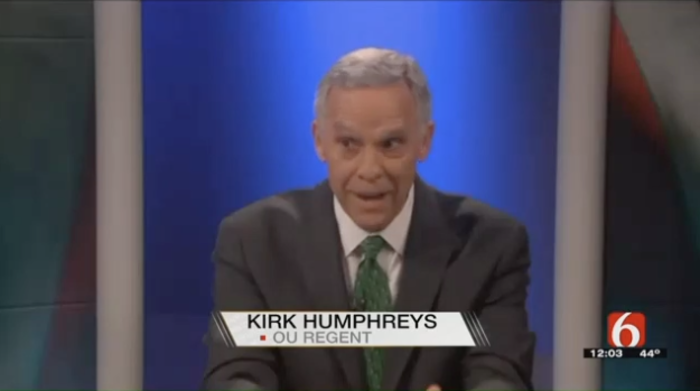 Stevenson says his organization has been lobbying to see that the one-time politician is finally held accountable for his anti-LGBTQ views.

Activists have written these entities “thousands of letters,” Stevenson claims.

“Our understanding is that [Humphreys] is planning to resign from the board of regents today,” Stevenson claims. “The board of Oklahoma City Public Schools is calling today for him to be removed from the elementary school board.”

The Oklahoma Gas & Electric Company has told Freedom Oklahoma that the company is “working on it,” he adds.

LGBTQ advocates are planning to protest at a meeting of the board of regents at 2:30pm this afternoon, with hundreds expected to attend the rally. Stevenson claims that Humphreys, who currently serves as vice chairman, is poised to become chair of the board next year.

The Oklahoma Industries Authority and Oklahoma City Airport Trust were not available to comment on any planned disciplinary action against Humphreys by press time.

This article will be updated should INTO receive comment.