Since last August, colleagues and friends of gay activist and journalist Ali Feruz have been speaking out about potential deportation back to Uzbekistan. They say the decision would have been a death sentence. In the conservative Central Asian republic, homosexuality is illegal and punishable up to three years in prison under Article 73 of the criminal code.

On February 2, 2018, a Moscow City Court halted a deportation order for Feruzwho had been detained by Russian policeand allowed the journalist passage to leave Russia. 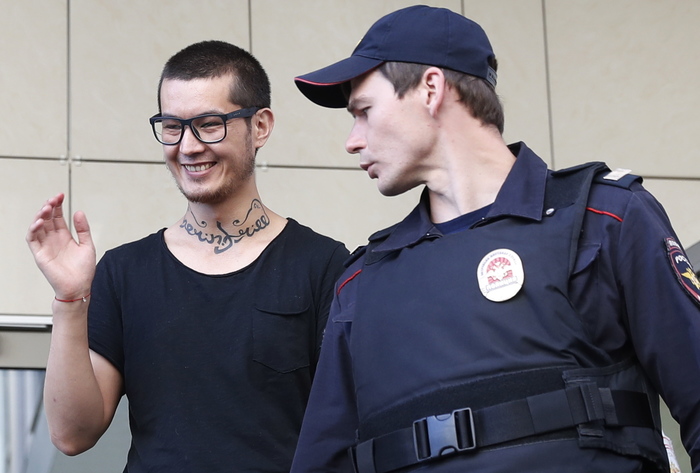 Feruz was born in the Soviet Union and became a citizen of Uzbekistan after fleeing at the age of 17. Feruz claimed he was savagely beaten by the National Security Service of Uzbekistan (SNB) in 2008. After finishing his studies at Russian Islamic University, Feruz went on to marry and have two children.

Elena Kostyuchenko, a colleague of Feruz’s for more than three years at Novaya Gazeta, spoke with INTO about the extreme abuses to which he was subjected by Uzbek officials. The SNB stuck needles under Feruz’s fingernails and threatened his then-wife in order to get him to spy on his Muslim friends. Feruz settled in Kazakhstan when he was forced to leave when the country’s officials imposed an extradition of Uzbek refugees. He would remain there until 2011.

Those suspected of religious extremism by the government particularly face extreme persecution.

After moving to Russia, Feruz publicly came out as gay in 2013 and divorced his wife.
When his passport was stolen, he neglected to apply for a new one at the Uzbekistan embassyin fear that he would be arrested because he had fled the Uzbek SNB during his last time in the country. Kostyuchenko says that Feruz, who lived in Moscow at the time, worked with the independent newspaper Novaya Gazeta for a year and a half. He wrote articles on topics ranging from “deaths of soldiers in the Russian army, corruption in Moscow government-run companies, and modern slavery” before he was detained by Russian authorities in March 2017. Months later, Feruz was arrested again and ordered to be deported to Uzbekistan.

“I’m very angry,” Kostyuchenko tells INTO. “I even cannot describe how angry I am. He did nothing to be sentenced to death.” 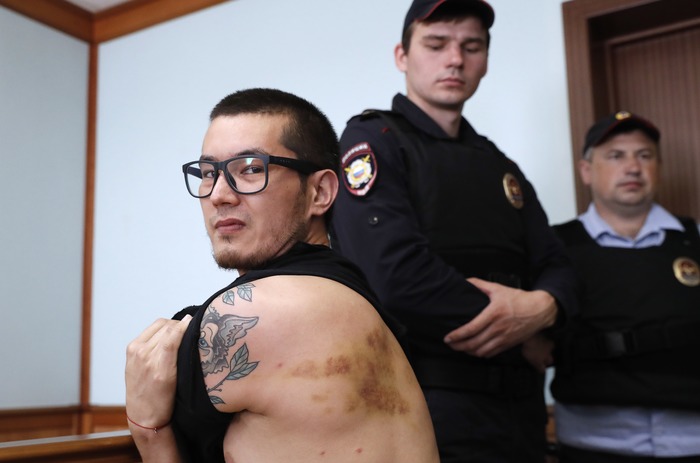 Feruz, terrified for his life, attempted suicide in the courtroom after the initial deportation order. In a statement shared with Novaya Gazeta, Feruz claimed that Russian authorities beat him and shocked him with a taser while he was handcuffed.

“I have been trying to get refugee status for three years,” Feruz told the BBC. “The police never had any problem with me before. It was only when I wrote about Uzbekistan, about the elections, that this started.”

In addition to repeated accusations of human rights violations, Uzbekistan is an authoritarian government that has suffered rigged presidential elections, rampant persecution of journalists, and imposed labor. While incarcerated, prisoners often face abuse at the hands of guards or denial of food.

“I think one thing that’s really important about Ali’s case is the interaction between governments in post-Soviet spaces,” says Elly Brinkley, a friend of Feruz and member of the New York-based activist group Voices4. “The greatest threat technically that Ali is facing is in Uzbekistan, but Russia is actively complicit in sending him there. His detention is really, we think, the result of him becoming a bargaining chip between Russia and Uzbekistan.”

To some, Feruz’s detainment could be seen as retribution for reporting, which was critical of both Russian and Uzbekistan politics. The paper that Feruz worked at, Novaya Gazeta, also broke the story of Chechnya’s abuses against gay men. Kostyuchenko spoke positively of Feruz’s work at the paper and how their newspaper attempted to help Feruz earn refugee status, “He’s a very nice reporter, very intelligent. Actually he is maybe the most respected journalist at Novaya Of course, wanted him to become our staff member.”

Over the recent weeks, Voices4 has been organizing actions to highlight Feruz’s situation.

“Until I teamed up with Voices4, I felt I wanted to do something, but I didn’t quite know how to do anything from here in New York,” Brinkley tells INTO. “I’m glad to have an outlet for that. It’s required a lot of research and working directly with people who are very directly involved with the case. We’ve kind of developed an informal network of activists around this case.” 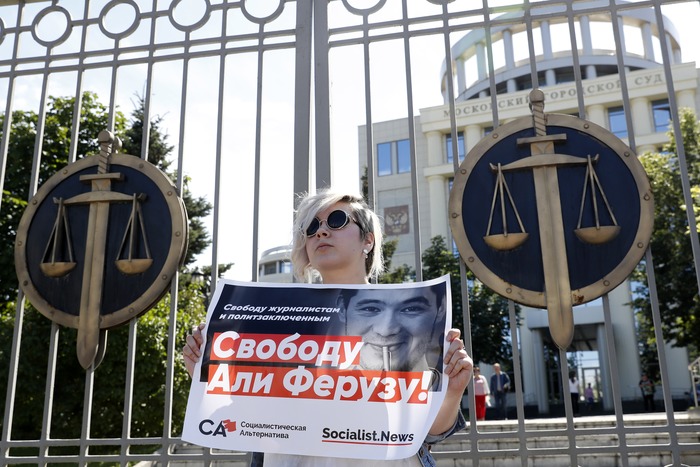 Voice4’s last action occurred just two days before the Moscow court’s decision to halt Feruz’s deportation to Uzbekistan. Activists projected Feruz’s image onto the Russian embassy. Other actions in New York City have involved reading an excerpt from Feruz’s diary aloud: “I’m now completely convinced that I’m not as strong as many people think. I feel that when someone needs help, they shouldn’t be ashamed of asking others in order to save themselves. Help me survive, please.”

Now that Feruz’s deportation to Uzbekistan is halted, he will be free to go to Germany after his documents are ready. Once there, he can accept the humanitarian residency permit that the country has granted him. With Feruz’s freedom in near reach, many in the LGBTQIA community can easily use the activism of Voices4 and other organizations to understand how to influence the queer community globally.

Voices4 founder, Adam Eli, told VICE how we can help our queer brothers and sisters beyond donating money to relevant organizations.

“[S]howing up and reaching out is huge,”Eli said. “I recently spoke to some of my asylum-seeking friends and they said a big turning point in their journey is when they discovered American friends and those people helped them grow and become who they are today. We have protests all the time and they’re really important. Because when we go outside a consulate, it conveys that Americans are watching what’s happening in these countries.”