Grindr’s president and former CTO Scott Chen wrote a comment on his personal Facebook page saying that he believed that marriage was only meant to be between a man and a woman, several sources from within Grindr told INTO.

On November 26, Chen shared an INTO article on his page about Cher Wang, the president and CEO of HTC, whose non-profits backed anti-LGBTQ U.S.-based groups organizing to influence Taiwan’s referendum on same-sex marriage. Citizens ended up voting to ban same-sex marriage; they also opted to remove LGBTQ-inclusive curricula in schools and include a non-marriage option for same-sex couples.

Chen shared the article about Wang on his public page, which led to several people commenting underneath. In a subsequent comment, captured in a screenshot and translated by an independent translator for INTO, Chen wrote:

“There are people who believe that marriage is a holy matrimony between a man and a woman. I agree but that’s none of our business. There are also people who believe that the purpose of marriage is to create children that carry their DNA. That’s also none of our business. There are people that are simply different from you, who desperately want to get married. They have their own reasons.” 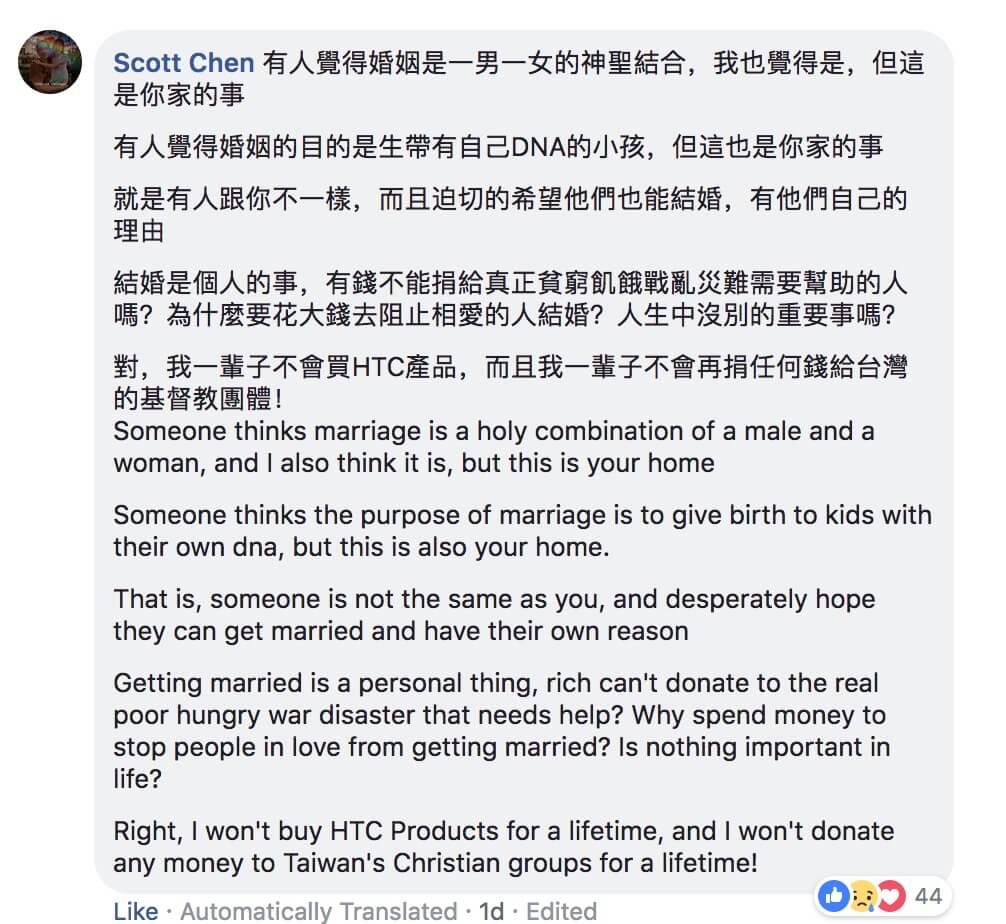 Chen subsequently wrote that marriage is a “personal issue” and said that he wished people wouldn’t donate to anti-LGBTQ causes and instead “donate your money to places that are in dire hunger, poverty, or suffering from war? Why spend all that money to stop people who love each other from getting married? Aren’t there more important stuff in life?”

He ended the post by saying, “I’ll never buy HTC products ever again, and I’ll never donate a cent to any Christian groups in Taiwan!”

Though INTO previously reported the post as being deleted, it reappeared on Chen’s feed after publication.

Chen moved into the role of CTO in 2017 after Chinese gaming corporation Kunlun acquired the dating app. (Full disclosure: INTO is owned by Grindr.) At the time of the acquisition, former CEO and Grindr founder Joel Simkhai exited his role as CEO and was replaced by board chairman Yahui Zhou.

Grindr, released in the app store in 2009, is the world’s largest dating app for queer people.

Chen responded to the article in a comment underneath the article after publication. In the comment, Chen called himself a “huge advocate for LGBTQ+ rights since I was young.” He also wrote: “I support gay marriage and I am proud that I can work for Grindr.”

INTO has reached out to Grindr for comment and will update when we hear back.

Nov. 30, 2018, 12:19 a.m.: This story has been updated to reflect Chen’s response to the article as well as the fact that the post, which was not visible on his personal Facebook at the time of publication, has reappeared on his Facebook.

Nov. 30, 2018, 9:00am: In an internal statement released to Grindr staff, Chen offered further clarification on his earlier posts:

“On November 26, I wrote a post on my personal Facebook account meant to condemn those advocating against same-sex marriage in Taiwan. The words I chose related to marriage between a man and a woman were meant to express my personal feelings about my own marriage to my wife – not to suggest that I am opposed to marriage equality.

I want to make clear that I am an advocate for LGBTQ+ rights and have been since I was young. I support gay marriage and I am proud that I can work for Grindr. I apologize that my words did not clearly convey these feelings.

I am very proud of the work INTO does and stand by them as an important part of our business.

One of our greatest strengths at Grindr is our diverse team and our respect for one another. Together, we will continue the important work we do fighting for LGBTQ+ equality.”