Half of Australians say that individuals should have the right to refuse to officiate same-sex weddings if doing so would conflict with their “sincerely held religious beliefs.”

After voting closed in a controversial plebiscite on marriage equality, a new survey conducted by Lonergan Research shows that the debate may not end after results are announced. Forty-nine percent of respondents told the Sydney-based market research agency that the law should protect religious entities, service providers, and private individuals who decline to take part in same-sex unions.

Just 35 percent of the 971 people polled believed that entities should be required to provide marriage services to all couples.

The Lonergan survey also hinted that the results of the nonbinding survey on same-sex marriage may be closer than prior tracking on the subject. The most recent Guardian Essential Poll found that 64 percent of Australians who had cast a ballot in the plebiscite voted “Yes.” But 10 percent of those who claim to have voted in favor of legalizing marriage equality tell the Sydney firm that they “misled” others about their ballot.

In contrast, just six percent of those who professed to have voted “No” claim to have lied about their vote. 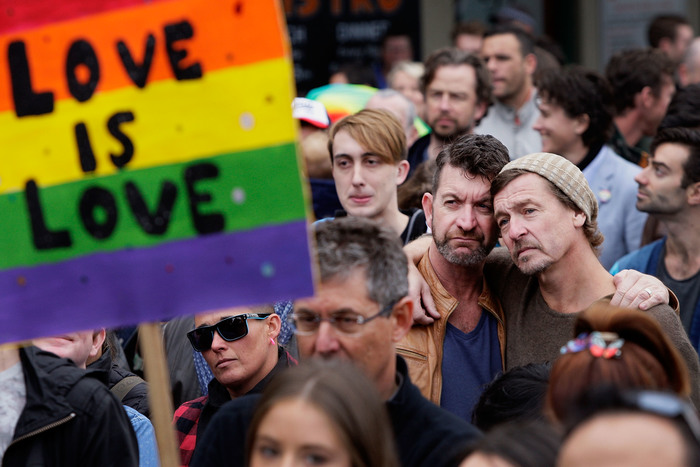 But “Yes” voters shouldn’t panic just yet: The Lonergan poll came to a similar conclusion about overall support for marriage equality in Australia. Sixty-five percent of respondents say that they cast a ballot in favor of same-sex unions, with just 27 percent voting against the freedom to marry for all couples.

The takeaways from this survey are somewhat mixed. But it isn’t the first poll to suggest that results, set to be announced on Nov. 15, may be more fraught than early reports of an impending “Yes” victory would suggest.

A survey of Twitter posts around Australia’s same-sex marriage plebiscite found that the “No” campaign would prevail in a tight race. The methodologies, which were developed by Griffith University’s Big Data and Smart Analytics Lab, pointed to a victory for Donald Trump in the 2016 U.S. election, flying in the face of nearly every other major poll.

Announced in August, the national referendum on marriage equality has resulted in a brutish months-long dispute over LGBTQ rights, one which brought out the most extreme factions of the Australian right.

What the Hell? A *STOP THE FAGS* poster ahead of Australia’s nationwide vote on equal marriage. Yup, disgusting. https://t.co/Y7Rr41RnR6 pic.twitter.com/pAXs3ZWZMk

Literature distributed in Sydney mailboxes referred to homosexuality as the “tragedy of a family, a grave to the family bloodline, a curse of family sonlessness” and claimed that transgender people are sexual predators. Posters reading “stop the fags” claimed that 92 percent of children raised by same-sex couples are abused, stating that they are also likely to be depressed or overweight as a result of their upbringing.

Australian Prime Minister Malcolm Turnbull has said that if the country votes in favor of same-sex unions, legislation to legalize marriage equality will be introduced by Christmas. If the “No” campaign wins a majority of the vote, there will be no change in the law.