Voting has begun in the contentious Alabama Senate race between Republican Roy Moore and Democrat Doug Jones, a tighter contest than many once expected.

Polls opened at 7am Central Time and will close at 7pm.

For those who are unsure where to vote in Alabama, Secretary of State John Merrill has set up a website where registered voters can check their polling place. The webpage for Alabama Votes allows users to search by county but requires a birth date and last name to look up polling centers in one’s county. 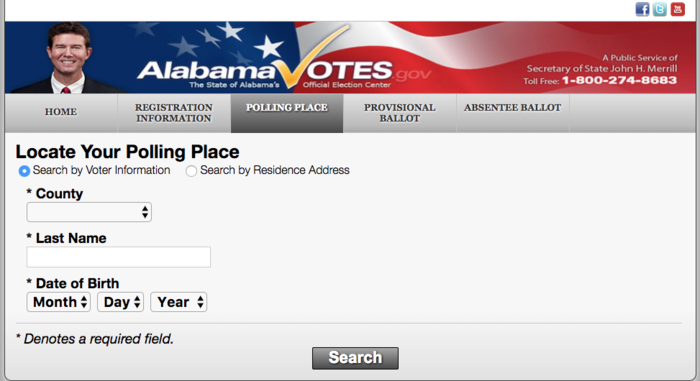 “The people of Alabama will do the right thing,” the POTUS assured his 44 million followers. “Doug Jones is Pro-Abortion, weak on Crime, Military and Illegal Immigration, Bad for Gun Owners and Veterans and against the WALL [sic]. Jones is a Pelosi/Schumer Puppet. Roy Moore will always vote with us.”

Moore has been leading the final days of polling following up to the runoff election, one that will decide which candidate fills Jeff Sessions’ vacated seat in the Senate.

Although surveys are all over the map, the polling averages from RealClearPolitics show that the GOP nominee has a 2.2 percentage point lead, despite nine women coming forward to accuse Moore of sexual misconduct. The Republican has claimed the allegations, which were originally made in a Nov. 7 report in the Washington Post, are “garbage” and “fake news.”

One of his accusers was 14 at the time she claims Moore, then a district attorney in Gadsden, Ala., molested her on their second date.

Early numbers in the special election were not available at the time of writing, although Moore rode in on a horse Tuesday morning to (presumably) cast a ballot for himself. There have already been multiple reports of voter suppression and long lines in the state.