On August 10, Pedro*, an HIV-positive man living in Valencia, Venezuela, reached out to a man 1,537 miles away on Grindr. Pedro had been living with HIV since March 2017, but he took his last HIV medication on June 8. Since then, he’d been living without Atripla, the medication he took to suppress his virus.

Pedro switched the filter on his Grindr profile to look for people in the “Poz” tribe and began to message people in hopes of spreading the word. The person he spoke to, Sam Graper, posted the message from Pedro on his Facebook.

“I have days without taking my treatment,” Pedro wrote to a stranger living in Orlando, Florida, on Grindr. “I would appreciate if you know any foundation that provides humanitarian aid to my country I write you because someone who does not have the virus does not understand the need to to take the daily medicine. Put yourself in my place; I’m desperate.” 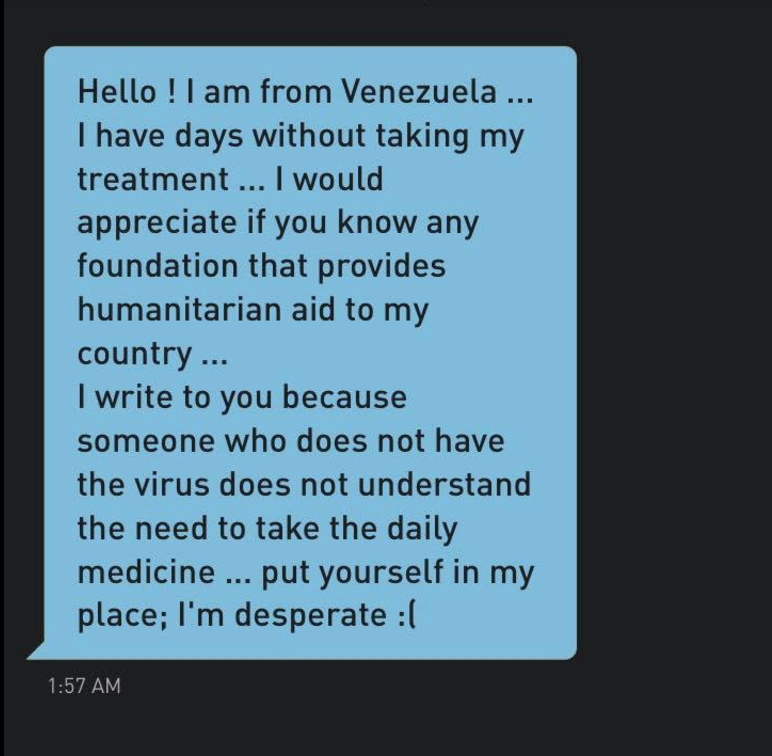 “I no longer had any options,” Pedro said in a phone interview with INTO. Pedro didn’t only message Sam or just Grindr users. He sent emails to dozens of staff at humanitarian organizations the World Health Organization, the Gates Foundation and more. In each subject line, he wrote the same thing: “Please help me,” in English or “Ayuda” in Spanish.

“It is a difficult situation,” Pedro said. “Nobody answers back.”

According to Jhonatan Rodriguez, president of Venezuelan AIDS advocacy organization StopVIH, Pedro is not alone. Rodriguez told INTO in a phone interview that he’s heard of shortages of at least six medications, including Atripla.

In February, Science wrote that Venezuela was facing a med shortage that could negatively affect its 110,000 HIV-positive citizens.

According to The Globe and Mail, Venezuela’s efforts against HIV were once one of the world’s most effective. However, during the country’s ongoing economic and political crisis, the country has had frequent shortages of HIV meds, leaving people like Pedro without treatment options. Medications are not available in pharmacies. And while some pharmacies do sell condoms, they’re wildly expensive.

Without proper HIV treatment, HIV can cause people to develop AIDS and potentially pass the virus to others. Also, for those who have started meds and go off them, the threat of developing resistance to the medication looms.

Rodriguez told INTO that there are currently no government-run HIV prevention programs and that condoms and HIV tests are no longer available from the government. Rodriguez added that med shortages are not all that spell trouble for people living with HIV. A lack of baby formula means some mothers with HIV face a tough decision: watch their child starve or potentially pass HIV onto them through their breast milk.

Pedro told INTO that he blames “the president and all those who are for him” for his lack of medications.

“People here are afraid to protest,” he said. “They play with our lives.”

Rodriguez said that StopVIH is currently receiving private funding to continue helping those living with HIV, but he said that people outside Venezuela need to spread the word about the plight of Venezuelan citizens, noting that “people are dying because of the shortage.”

Recently, StopVIH announced on its website the program “Pura Vida,” which will see StopVIH team up with AID for AIDS International as well as other groups in Venezuela to try to get recycled HIV meds from other countries into the hands of Venezuelans.

“One antiretroviral pill translate to one day of life for each person with HIV. That’s why our program is called Pura Vida, because it gives patients that hope, that day,” Rodriguez said in a press release for the program.

While the program will certainly help combat the day-to-day needs of those living in Venezuela, it will only be a small intervention into a nationwide structural crisis.

“It is a human rights compromise because it is the right to health and life,” Rodriguez said. “Nothing should be above that. No political interests, no money, nothing.”

*Pedro’s name has been changed to protect his privacy.