It’s been more than a month since musician Ed Droste launched ’10 Featured Teachers’, and his impact highlighting a little discussed issue has been huge.

Before the musician began his social media campaign, which highlights a severe lack of funding in US schools, he was aware that public school teachers already earn paltry salaries for the work they put in. But Droste had no idea that they were also expected to fund basic supplies for their own classrooms.

It wasn’t until he talked to his friend Christine (chosen as the tenth and final featured teacher), who recently left Hollywood to work in a low-income Los Angeles school, that he understood the gravity of the problem and felt galvanized to act.

Unlike many popular musicians, Droste has always been political and unafraid to make it clear.

He’s described the music industry as “fucked”; he’s shed light on the ongoing discrimination faced by LGBTQ artists and communites more generally; and he’s talked at length about America’s normalization of fascism and racism. The title of one 2017 profile blithely states: “Grizzly Bear’s Ed Droste Refuses To Give Us A Clickbait Headline.” It’s a statement which sums him up perfectly — he’s less interested in viral news and industry bullshit than he is in genuine activism.

So it’s heartening that his campaign has made headlines for all the right reasons. News reports revealed the positive impact that his call for funding had on local communities; seeing the impact, other celebrities including Busy Philipps, Kristen Bell and Beth Ditto carried on the challenge, raising yet more money for underprivileged students and teachers nationwide.

Perhaps without expecting it, Droste has proven that it’s possible to be both a famous person and an advocate for genuine change. In the weeks following his own campaign, we reached out to discuss its impact, the importance of using your platform for good and the institutional racism which still underpins America’s school system.

We sat down with the musician to learn more about the campaign, its impact, and what’s next.

INTO: It’s been a few weeks since you launched 10 Featured Teachers. Have you been surprised by the huge reaction?

Ed Droste (ED): I am surprised, but so thrilled. I knew it would get some traction with Busy [Philipps] but I had no idea she’d pass it on to Kristen Bell, who I hope continues to spread it to others. In the end Kristen featured 20 teachers, and Mark Duplass just started. It really only takes like 10 minutes a day and it does so much. I hope it continues to grow, but you’d be surprised by how many people said to me that it “seems hard.” 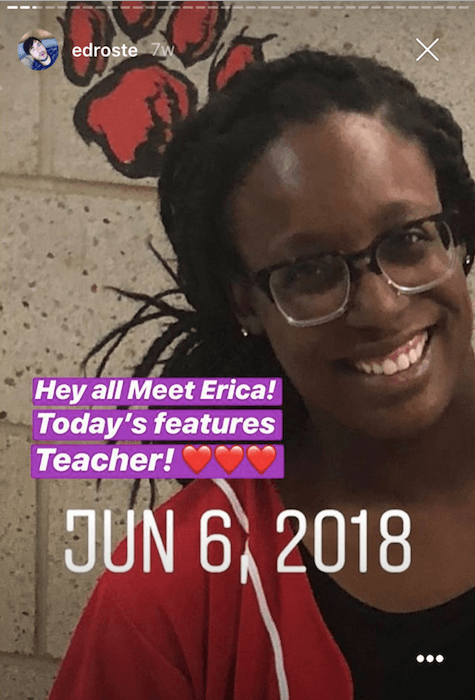 You’ve said that your friend Christine inspired the project — can you tell me a little more about that initial conversation.

ED: Christine recently left Hollywood to become a teacher and now works in one of the lowest-income areas of Los Angeles. She literally has no funding for her classroom, so she put together a wishlist. I couldn’t believe that, on top of her poor pay, she was expected to make it a fun, safe and accepting space with her own money —  it was truly disheartening to hear.

I might have known peripherally, but my parents were both private school teachers so my brother and I got a free ride growing up. I didn’t know how severely in need teachers at public schools —  in particular Title 1 schools — are until Christine shone light on the situation to me.

ED: Fairly simple: I tried to choose diverse communities from around the country and make sure the school was Title 1. All children deserve a fully-supplied classroom, but those schools are just in huge, huge need.

Why do you think underprivileged students still aren’t getting the help they need?

ED: Honestly I don’t think this country honors our teachers the way they deserve to be honored. When I started the project I got so many notes from teachers working in better-funded schools thanking me for spreading the word, because they’re underpaid and the profession isn’t ‘celebrated’.

One Scandinavian teacher wrote me saying that teachers there are celebrated; it’s a desirable job because it’s rewarding, but also because the pay is good and schools are properly funded. It’s sad how little emphasis we put on schools here. I don’t want to go on a huge tirade, but there are people in power interested in keeping low-income communities on a low income.

It ties into centuries of institutionalized racism, and it’s frankly appalling. 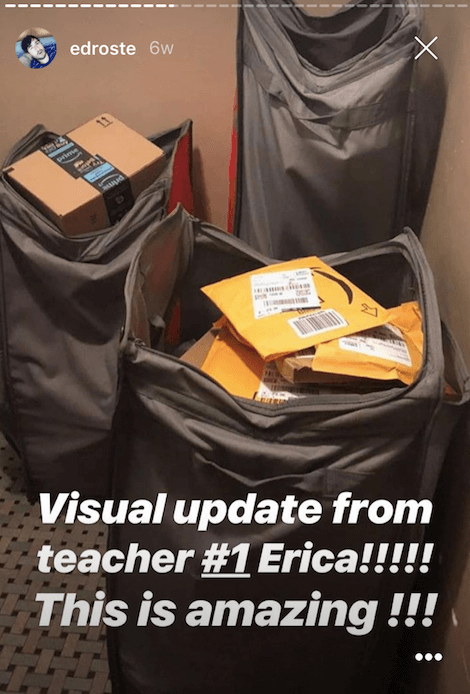 Do you feel like it’s particularly important for you, as someone with a fan base and a platform, to speak on political issues, or are you just a naturally political person?

ED: Personally I feel it’s a responsibility. Sometimes conservatives (as I’m so liberal!) get angry and tell me to “stick to music”, but fuck that. I deserve to share my opinion; if you don’t like it you can leave. I don’t care about followers and definitely lose a fair amount for politically charged posts, but if you’re that offended by somebody expressing their beliefs there’s practically no hope that you’ll listen or be open to changing yours.

I listen to conservative viewpoints and try to engage, but mostly people don’t want to — they have their blinders on. I find it sad when superstars stay silent on things that could change the way things happen in this country for fear of losing fans, too. They’re already multimillionaires, speak up!

It’s been getting better, but I know so many that still basically say nothing. It grosses me out!

Did you learn anything new about the school system from this?

ED: Even wealthy areas still have numerous Title 1 schools. It’s everywhere, so I guess the pervasiveness of it all was the most shocking thing. There are thousands in need, and they’re all over. It’s so sad.

When did it first occur to you that you could social media could drive positive change?

ED: Well, I’ve been speaking out on causes for years, but I hadn’t thought about using it to get material items to people in need. With a quick swipe and an extra $12 you can get a teacher a book which helps their students see themselves represented in the literature they read — and most of the items teachers ask for are pretty affordable. I decided to give it a go, and I was so excited that people were generous and wanted to help! 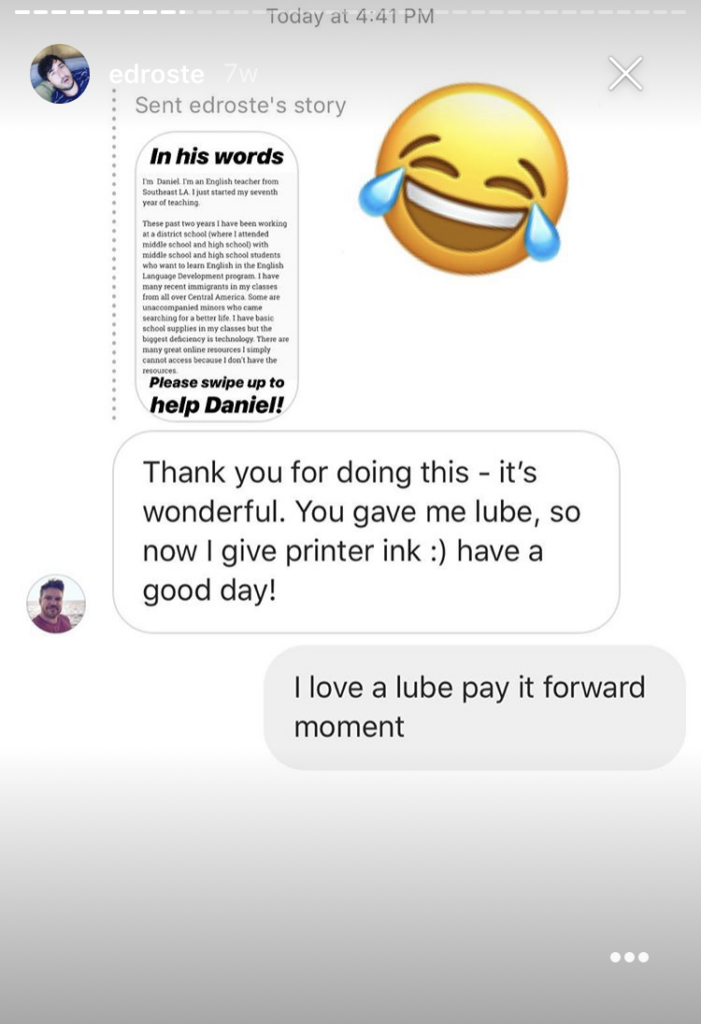 Do you feel like that element of social media is underestimated? So many people have taken on the challenge — that in and of itself shows influence.

ED: I think it’s inherently a narcissistic, ‘selfie’-type thing. When you ask someone to stop self-promoting it can be a tough transition into spotlighting teachers; I was told that it felt ‘off-brand’ for some people. They don’t want to disturb the flow of self-promotion, and sadly that tends to be what the audience wants. Engagement is lower for the teacher posts, but enough people engaged to make it worth it.

It’s not uncommon for people to use social media for positive change, though. So many grassroots organizations have sprung up from hashtags, and that’s incredible. I love it when I see more of that. We’re getting to a point where it’s imperative that people speak up —  look at Taylor Swift. It took her a decade or so, but she finally spoke out and had a huge impact on voter registration.

Not everyone can tackle everything all the time, but it’s not hard to share your social media spotlight with a cause or two you believe in. I’m seeing that become more prevalent, and it’s really nice.

Finally, what message would you give to someone who wants to take on the challenge but might be reluctant or pushed for time?

ED: I would say seriously that all it takes is about 15 minutes and a mild understanding of Instagram and Amazon. If you want to but find it confusing, ask a tech-savvy friend to explain. If you literally have no time at all but you have funds, hire an assistant to do it.

I don’t know, it feels like most people have 10 minutes a day to spare. But who am I to say?