Seventeen years ago, around the world, many of us were dealing with the immense trauma that was September 11th, 2001. The attacks of that day have remained a somber beat on the hearts of American every day since. In the wake of that horrific tragedy, we felt and saw the country united in a way never before seen for many of us.

Though it happened many years ago, the effects of 9/11 have stayed with us. As time has passed there are some harsh realizations about the truth of what 9/11 did to this country. Its tragedy sparked a wave of unification across all fifty states. Americans postured about pride in our country and united in what ended up being a Christian nationalist movement. So many us were busy riding the wave of what we can now call “America first” sentiments we didn’t see the others who suffered and drowned along the way. Through a retrospective lens, it becomes clear that “our country” wasn’t really meant to include queer and other marginalized groups.

In the post 9/11 world, the reporting and stories that got told reflected the values of a white Christian nation determined to stand up for their place and power amongst global turmoil. The problem with that is that most Americans are not white Christians and that in these moments of unity, queer people often find themselves ostracized. With the rage over the attacks already in place, queer people have been erased, maligned and blamed for the horrors of that day still.

Jerry Falwell, a popular Christian conservative, went on the 700 Club with Pat Robertson and suggested that gay people were part of the reason it happened. “[T]he pagans and the abortionists and the feminists and the gays and the lesbians who are actively trying to make that an alternative lifestyle, the ACLU, People for the American Way,” Falwell said, “all of them who have tried to secularize America, I point the finger in their face and say ‘You helped this happen.'”

Though Falwell later apologized for those sentiments, they didn’t stop others from continuing that hatred. As more gay rights have come to fruition and we’ve moved the needle forward for trans rights and activism, Christian conservatives find ways to continually blame queer liberation for tragedies of the past. Like Anne Graham Lotz, daughter of evangelical pastor Billy Graham, who suggested that “transgender silliness” is why God allowed 9/11 to happen in response to the bathroom bills that have become a nationwide issue after the enactment of HB2 in North Carolina.

Placing blame on queerness for the troubles of the world was absolutely nothing new, but as the country united to combat terrorism, it didn’t stop the continued marginalization of queer people — including those who suffered directly from the attacks. Nancy Walsh, whose partner of 13 years, Carol Flyzik, died in the attacks on 9/11, had to fight in court to be awarded from the September 11th Victims Compensation Fund. The fund was a part of legislation signed into law by President Bush to award victims and their families compensation for their loss in order to prevent lawsuits against the airline industry. However, there were questions as to whether the fund would recognize the partnerships of queer couples considering that at the time the Defense Of Marriage Act only recognized heterosexual marriages on the federal level.

In the wake of this tragedy, just three years after the attacks, President George W. Bush supported a constitutional amendment that would define marriage as between one man and one woman. The bill was co-sponsored by Jon Kyl, a conservative senator from Arizona at the time, who is expected to fill John McCain’s now vacant seat by special appointment. The amendment never passed, but its formulation is a sobering reminder that efforts to protect America, freedom and its values so often include denying equal opportunities to LGBTQ people.

As many as 22 openly LGB people are reported to have died in the attacks on that day. Their stories and legacies remain a very small part of the narrative, both in queer culture and beyond. The first official victim of the attacks was Mychal Judge, a Catholic priest and the chaplain of NYC Fire Department who died while giving last rites to an injured firefighter when the North tower collapsed. He was named victim 001 of the 9/11 attacks. Judge was a celibate gay man. A little-known documentary, Saint of 9/11, was made about his life and narrated by Sir Ian McKellen. 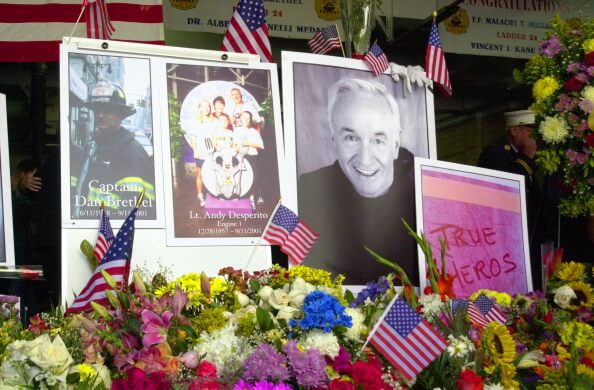 Queer people have a history of being blamed for tragedies beyond our control or having our voices erased from the story. To many, queer people are part of the problem and never the solution. Our pain and suffering doesn’t register as valid in the eyes of many, because they believe the struggles of queerness are self-inflicted and, more nefariously, that they are justified.

Tragedies as recent as the Pulse nightclub massacre, a tragic shooting in which 49 people were murdered in an LGBTQ nightclub in Orlando, remind us of how the world responds to LGBTQ suffering. One of the biggest mass shootings in the history of the United States and by far the deadliest attack on LGBTQ Americans was almost immediately denied as a tragedy for LGBTQ people. Years later, as new evidence became available during trials, publications worked to remind us and clarify to a still-grieving queer community that this tragedy wasn’t about us. A petty moment of clarification meant to strip queer people of the illusion that the tragic deaths of 49 of their community members could actually be about them.

Tragedy and grief for LGBTQ people is different than it is for any other marginalized groups. For those of us living at an intersection of identities even more so, as that intersection sometimes creates a dilemma as to where our pain dwells most deeply. As we look back on 9/11, we should work hard to remember the ways in which these moments of tragedy affect our community at large, the picture they paint for our future in comparison to the one it paints for the future of those outside of it. We’ll find that so often we have to suffer twice.