Thailand, often perceived as one of Asia’s most LGBTQ-friendly countries, is on track to pass legislation recognizing same-sex partnerships. After the groundbreaking Gender Equality Act of 2015 ostensibly banned gender-based discrimination, the Life Partnership Bill could be submitted for a vote before the end of this year.

If the law passes, Thailand will be the first country in Asia to legislate on same-sex partnerships on the national level. (In 2017, Taiwan’s Constitutional Court ruled that the Legislature had two years to pass a law recognizing same-sex couples, but that effort has been complicated by a referendum against the amendment of the Civil Code designed to block same-sex marriage.) Despite growing optimism from supporters of the bill in Thailand, many obstacles remain.

Thailand projects a socially progressive veneer abroad, where it is known as a destination for everything from gay nightlife to fluid attitudes toward gender and sex reassignment surgery. However, the reality on the ground is more nuanced. Certain groups within the country have been vocal in their opposition to the project. In particular, conservative Buddhist groups (in a country that identifies as over 90 percent Buddhist) and Muslim associations from the south (where Muslims represent a significant part of the population) have spoken out against the bill.

“In the deep south of Thailand, they want an article stating that this law is not applicable to Muslim people, but that would be against the constitution,” said marriage campaigner Nada Chaiyajit in an exclusive interview with INTO. “The law should be applicable to every person no matter what religion or ethnic minority they are.”

The government’s own position on the issue is something of a paradox. The military-backed regime came to power in a coup in 2014 and is largely supported by conservative traditionalists. Yet in 2015 it passed the anti-discrimination Gender Equality Act; that legislation ensures legal protection whether a person “is male or female or of a different appearance from his or her own sex by birth” and created the Gender Equality Promotion Committee. The board can be petitioned to review specific cases of discrimination.

Some activists have criticized the lack of enforcement of the act, however. The law also stopped short of recognizing the marriage rights of same-sex couples.

Although support within the government for human rights legislation isn’t unanimous, the Life Partnership Bill’s passage would be due in large part to the efforts of the Ministry of Justice. Nareeluc Pairchaiyapoon, director of information of the Ministry’s Rights and Liberties Protection Department, is resolutely optimistic. Her department is currently piloting the bill through revision and review.

“We are lucky to have the current Minister of Justice, Air Chief Marshall Prajin Junthong, who is really interested in this issue,” Pairchaiyapoon said in an email to INTO. “He has played an active role in pushing forward the success and completion of this process.”

But the “process” she refers to includes combatting internal reticence from other government agencies. 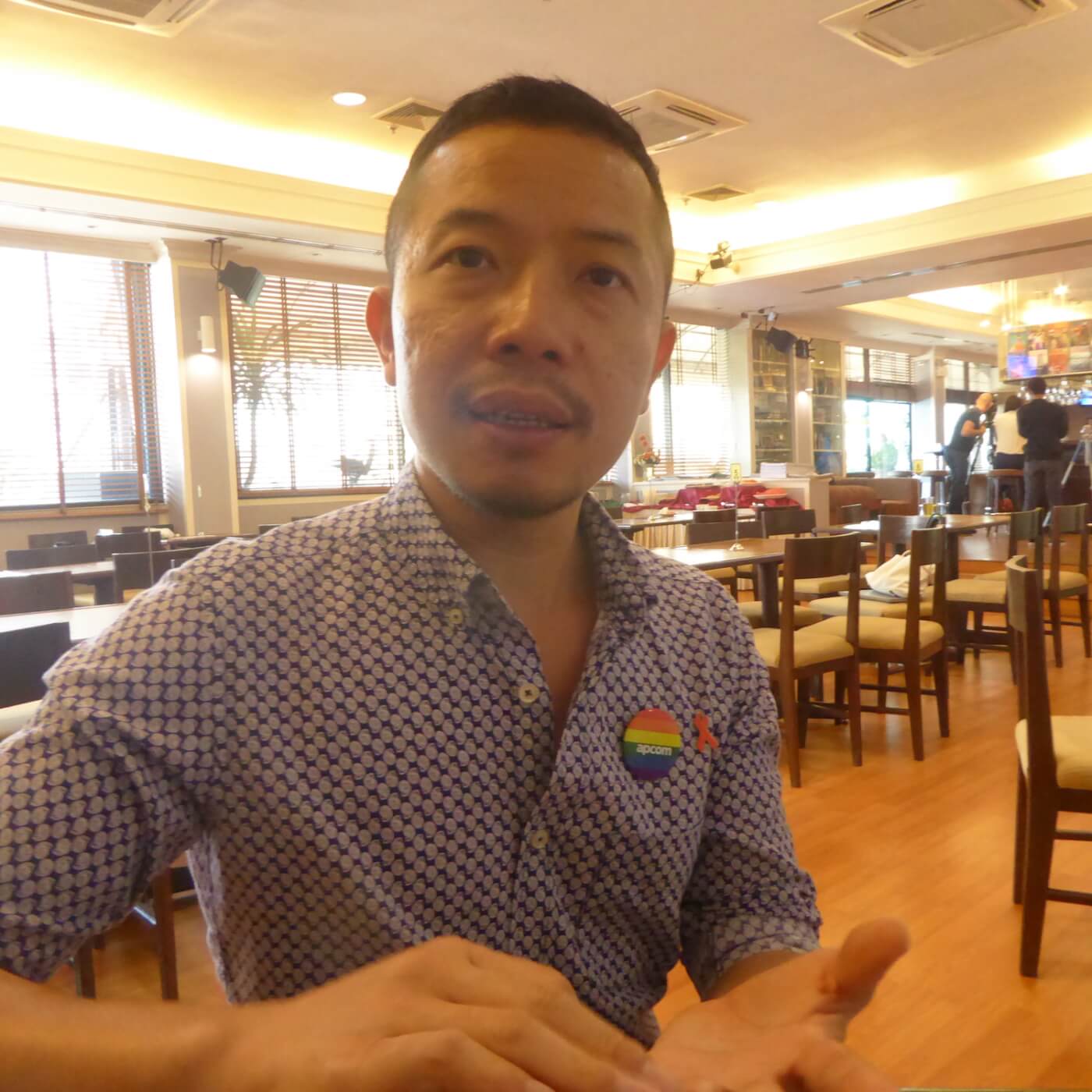 A positive outcome may appear tantalizingly close at hand but savvy campaigners are hedging their bets. In a no-nonsense mix of chutzpah and realpolitik, they have articulated three different strategies for bringing about change.

First, there is a campaign to amend the Family Code to remove the specification of a man and a woman from the definition of marriage. “This is the best solution because it will ensure that LGBTQ people will be treated equally before the law with full recognition of every single right [granted by marriage],” Chaiyajit explained.

But she claimed it’s also the option that meets the most resistance, citing “the morality of conservative groups, in government agencies and in the public in general.”

Such a decision would echo the situation in Taiwan, where a court ruling required the government to pass non-discriminatory legislation. The process is a long one, though, and the court’s ruling is not a foregone conclusion.

A positive outcome may appear tantalizingly close at hand, but savvy campaigners are hedging their bets.

Finally, there is the current fight for the Life Partnership Bill. Chaiyajit’s assessment is very matter-of-fact: It is an acceptable compromise if it grants equal rights. “Society needs to be open and accepting and it’s a learning process. So having a civil partnership could be a very strong form of advocacy to educate society to understand that we have exactly the same rights.”

What remains to be seen is whether such a law would grant “exactly the same rights” that are equal to marriage in all but name.

Kittinun Daramadhaj, president of the Rainbow Sky Association of Thailand, has his doubts. Speaking in Thai in a recent press conference, he mentioned adoption, surrogacy, parental authority, tax benefits, welfare, and pensions as areas that the current government would likely exclude from the bill.

While the Life Partnership Bill is the most immediate prospect for relationship recognition, a deadline is looming. The military government has announced parliamentary elections for Feb. 24 next year, the first since the coup d’état in 2014. Following legislative procedure, that means that the last possible date that the government can submit a bill to the current National Legislative Assembly (NLA) is December 28.

Again, the spokesperson from the Ministry of Justice is convinced this will happen.

“We will submit the draft bill to the cabinet [before the deadline] for sure,” said Pairchaiyapoon.

This path is still fraught with uncertainty. Even if it is submitted before the deadline, the bill may or may not have enough time to reach a vote in the legislature. Despite consultations and public hearings, the exact wording of the bill, the rights it will include or exclude, and when it will take effect are still a mystery.

This is not the country’s first attempt at a same-sex partnership bill. In 2013, a draft was submitted that had wide support from both government and opposition. But the bill, stalled by debate over a host of issues that were considered sensitive by conservative factions, never made it to a vote in parliament. These dealbreakers included same-sex adoptions and age of consent.

The volatile political climate of the time in the notoriously changeable Thai political landscape—the kingdom has had twenty-some coups or attempted coups since the abolition of the absolute monarchy in 1932—made political consensus nearly impossible. Anti-government demonstrations paralyzed the country for months and eventually toppled Prime Minister Yingluck Shinawatra. A military-led coup in May 2014 resulted in the suspension of much pending legislation, including the civil partnership bill.

Campaigners, though, have not given up the fight for recognition of their relationships and their families.

In July 2018, a draft known as the Amphawa Model (named after a market town outside of Bangkok) was produced. Rounds of public hearings involving government and civil society have been held, and with the exception of conservative religious groups, support has been almost unanimous. “Prosecutors, law professors, the people who joined the consultation to review the draft, besides the religious groups, 100 percent of the people raised their voices to support the civil partnership law,” Chaiyajit noted. “This is what we heard from the public consultations across the country.”

Is campaigning on all three fronts simultaneously contradictory? Not at all, said Midnight Poonkasetwattana, Executive Director of Apcom, an advocacy group based in Thailand but active throughout Asia.

“It’s a very Thai thing,” he said in an exclusive interview with INTO. “You don’t know what’s going to come first, and which basket to put your eggs in.”

All three channels are thus worth exploring simultaneously.

“It could be passed before [the elections], but they could also say that they’ll just defer that until the next government, right?” Poonkasetwattana argued. “It’s a kind of limbo, nobody knows exactly what is happening.”

Chaiyajit noted that fighting for what she sees as a basic human right can be frustrating, but open conflict with her opponents is not constructive, especially in Thai culture. “Many times we want to explode [but] yelling at them doesn’t make any change. They will shut their door. They will shut their ears.”

She has vowed to stay focused on the reasons she is fighting: love and family. “Having a family is the freedom to choose someone to love and to spend the rest of your life with.”