The people of Pittsburgh gathered in the streets on Tuesday afternoon with dual purpose: to publicly mourn the 11 people killed during Saturday’s anti-Semitic mass shooting attack on the Tree of Life synagogue, and to protest President Trump’s visit to the city in defiance of requests from the mayor and families of the victims that he stay away from the city as funerals begin.

“There are, of course, queer and trans people at that synagogue. There are, of course, queer and trans Jewish people,” says Diana Clarke, a 27-year-old queer member of the Pittsburgh chapter of IfNotNow, a Jewish movement to oppose the Israeli occupation of Palestine. Clarke is speaking with INTO amid a crowded protest at the corner of Darlington and Murray, just outside of the Jewish Community Center in Pittsburgh’s Squirrel Hill neighborhood.

The IfNotNow protest is appropriately themed as a Shiva, the ritual mourning period observed by Jews after a death. Folding tables stacked with food and drink, the traditional gifts brought to a mourner’s home by Shiva callers, line the sidewalk as protesters gather.

Also in the tradition of mourning, protesters recite the Kaddish and sing a song of strength and salvation called Ozi V’Zimrat Yah.

“I think the place where it all intersects the most is that the system we live under, white supremacy, causes harm,” says Clarke. “Specifically this week we’ve seen that harm to Jews and to trans people, with the administration speaking explicitly about working to deny the existence of trans people.”

Clarke is also careful to point out that the shooter wasn’t just targeting Jews, but was also targeting immigrants and refugees because of the synagogue’s relationship with HIAS (Hebrew Immigrant Aid Society), one of the oldest immigrant and refugee aid organizations in the United States. In posts on the right-wing social network Gab, the shooter had appeared convinced of a radical conspiracy theory that claims HIAS is responsible for bringing dangerous people into the country.

“HIAS brought my family here. This feels like a real attack on who I am as a person,” says CB Chernomorets, a 24-year-old member of the Pittsburgh chapter of IfNotNow.

Among the people who came out to protest today, on what otherwise would be a day of collective grieving, many blame Trump for inciting white supremacists and for empowering the most fringe right-wing hate groups.

30-year-old Hannah Uman refers to herself as a straight ally and advocate for LGBTQ equality. She was a substitute teacher at the Tree of Life synagogue where Saturday’s shooting took 11 lives, and she’s from a long line of Pittsburgh Jews. She said what’s happening “feels very personal.”

“From the get-go Trump had an underlying anti-Semitic message in his campaign,” says Uman. She pauses, choking briefly on her words as she explains that she’s getting emotional. “Trump has anti-Semitic rhetoric and anti-LGBT rhetoric. And people would say, oh that’s just talk. It’s not just talk.” 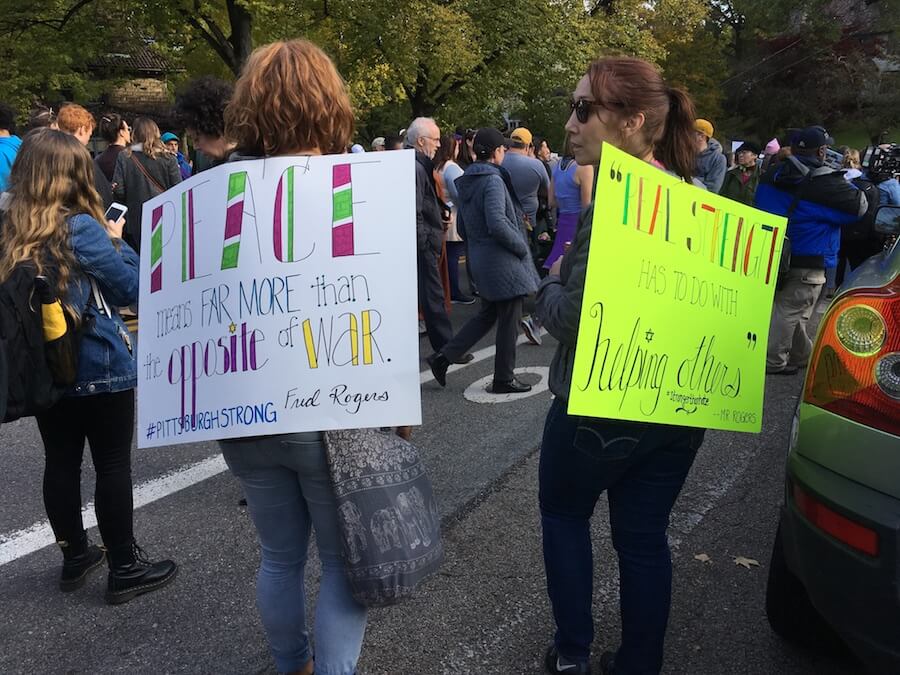 Both Clarke and Uman referred to the Health and Human Services proposal, revealed by the New York Times the weekend before the shooting, to enact a policy defining sex as a binary of male and female only, widely seen as an attempt to effectively erase American trans and nonbinary people from existence. The proposal, which suggested using genetic testing to verify people’s sex, is what most people interviewed by INTO raised when asked whether they supported or opposed Trump’s LGBTQ-related policies.

“We’re seeing attacks on everyone’s rights,” says Chernomorets. “It’s not as if Jews are the only ones being targeted right now. In the same week, we’ve had so many attacks on trans folks — and that’s me too. I’m the trans Jew that you’re worried about.”

Chernomorets, who uses they/them pronouns, says they “stumbled upon” IfNotNow because they were trying to find a queer Jewish community. They live in communal housing for young Jews in their 20’s and 30’s, but felt especially excited by the number of LGBTQ people working with the group.

The shooting at Tree of Life is intricately linked to Pittsburgh’s LGBTQ community. One of the congregants killed, Dr. Jerry Rabinowitz, was beloved by many in the gay community for his early commitment to treating patients with HIV and AIDS in the days when many doctors refused to see them. “He was known in the community for keeping us alive the longest,” wrote ACT UP member Michael Kerr in an online tribute to Rabinowitz.

LGBTQ community news outlets also reported that the shooting occurred during a bris for the adopted children of a gay couple. The presence of the gay couple was originally reported on Facebook by Pittsburgh LGBTQ nonprofit Delta Foundation, which organizes the city’s pride parade. But later, Delta Foundation said that even though several members of the community had reported the gay couple’s involvement, the foundation was unable to confirm or verify any further details and had edited the original Facebook post to remove the information.

Delta Foundation was among the groups organizing a second rally on Tuesday, along with Bend The Arc Jewish Action Network, Women’s March, Labor Council for Latin American Advancement, Torah Trumps Hate, and more. Around 1,000 people appeared to be at the ‘Pittsburgh Loves All Our Neighbors’ rally, which later marched down Forbes avenue through the Squirrel Hill neighborhood. 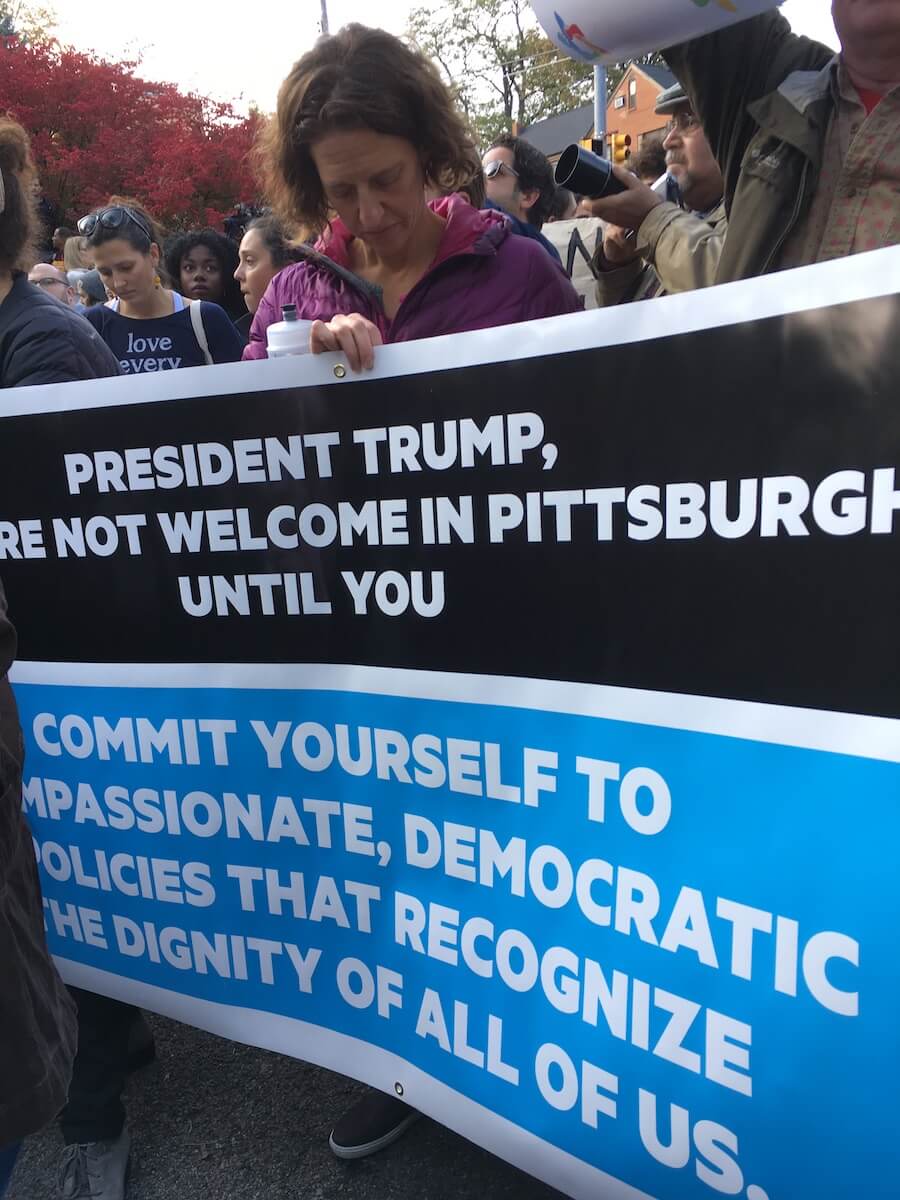 Chernomorets says the manner in which various parts of Pittsburgh communities have banded together is “unreal.”

“Trump empowers people to show the worst sides of themselves,” says Chernomorets. “Trump gives people that extra pat on the back that says ‘it’s OK to commit these kinds of atrocities, because the folks you’re committing atrocities against are not really people.’”

“But we are people,” Chernomorets adds. “We’re standing up, and we’re not dealing with this anymore.”