“You’re a gentleman when you step onto the mat. Then, the ref blows the whistle,” said Calvin Malone, a wrestler representing the United States in the 10th iteration of the Gay Games. “When he blows it again, you are a gentleman again.”
Malone divided his attention between two simultaneous wrestling matches on the mats before him as he stood on the sidelines of the auditorium in the Institut du Judo, the venue hosting the wrestling and grappling portions of Gay Games X. The quadrennial LGBTQ international sports festival featured over 10,000 participants competing in 37 athletic disciplines across Paris from August 4th-12th. For Malone, the sport of wrestling, where combatants use brute force to pin their opponents into submission, is bookended by sportsmanship, which along with personal achievement and inclusion, is a founding principle of the Gay Games. Aggression is balanced by a sense of civility.
For Americans, civility is a concept that has eroded exponentially since January 20th, 2017. This year’s Gay Games is the first since the inauguration of Donald J. Trump, who has deteriorated civil discourse on a daily basis by vilifying the free press, comparing immigrants to infestations, and promoting violence against peaceful protesters. The LGBTQ community has taken its own lumps under the Trump regime; he either snubs, like when he refused to acknowledge June as LGBTQ Pride month two years in a row, or attacks, as with his criticism of trans military personnel.
Trump’s vitriol isn’t just reserved for domestic targets. Over the course of his brief presidential career, Trump has imposed tariffs on traditional American allies, undermined the importance of NATO, and withdrawn from the Paris Accords. While Trump used the Paris Accords to further his “America First” brand of nationalism, Gay Games used Paris as a platform to promote LGBTQ globalism and cultural exchange.
This notion is exemplified by a conversation with Andrew Farrell, a gold medalist in wrestling from Australia. This country was one of the first allies Trump alienated when he clashed with Prime Minister Turnbull over a refugee agreement during an infamous January 2017 phone call. 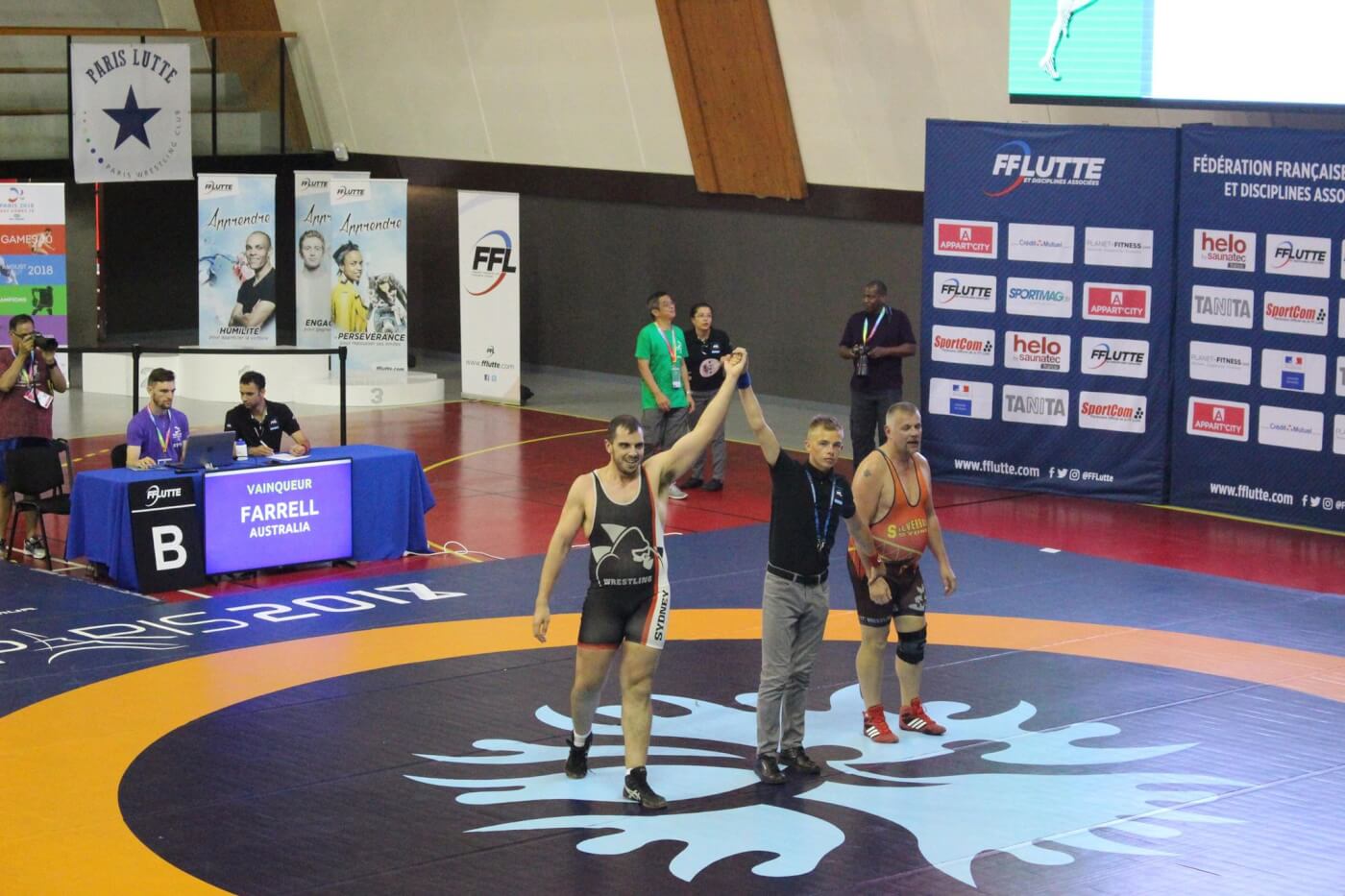 Sipping a cappuccino at a sidewalk cafe in Le Marais, the gayborhood of Paris, Farrell and I bonded over a hard-earned political victory recently achieved in both Australia and the US: marriage equality. Same-sex couples in America have been able to legally wed since 2015, although Trump’s Supreme Court appointment of Neil Gorsuch, and potentially Brett Kavanaugh, could threaten to reverse this. Marriage equality in Australia is even more recent, passing on January 9, 2017, after a contentious postal survey.
“The way we got to marriage equality was actually quite sick,” explained Farrell, “having to go to a non-binding public vote. Since it was non-binding and it wasn’t an official vote, they could run all these inaccurate ads, creating their own facts. If you want to quote the madman,” he tacitly alludes to Trump, “‘alternative facts.'”
Farrell’s disgust is justifiable. Misleading attack ads insinuated that gay marriage would encourage transvestitism and radical homosexual indoctrination for school children. Despite this misinformation, the Marriage Amendment Act passed with the support of 61.6 percent of voters.
“We got there in the end. It was disheartening,” Farrell says, “but everyone stuck together.”
While marriage equality was an uphill battle for both Australia and the United States, Farrell acknowledges that many Gay Games athletes face even harsher problems in their home countries.
“There’s a lot of people coming from countries that are not so LGBTQ friendly: the United Emirates, Saudi Arabia, China, Russia. It takes a lot of courage to do that. You’re putting your name out there when your country, and your government, might not necessarily be supportive of that. The fact that they’re still competing so fiercely, I find that very motivating myself, to try to push harder. Everyone putting in their best effort, that’s inspiration for me.”
Farrell wasn’t the only Gay Games participant displaying respect for his fellow athletes. Mark Wussler, a US swimmer from Maui, broke his personal record by winning six gold medals. Yet he found his biggest reward in the fortitude of a pair of female swimmers.
“I got a chance to visit with two Ugandan women swimmers,” said Wussler. “They face pretty bad discrimination and even death threats in their home country. I just told them that everyone at the swimming venue was talking about them and was so proud of their courage and determination. We take so much for granted and those of us who struggled many years ago through discrimination, and of course the AIDS crisis, came out strong and resolved to live an open and loving life. But when you hear about the kind of blatant and brutal hatred still present in some countries it really drives home the point on why we have to have these kinds of gatherings.” 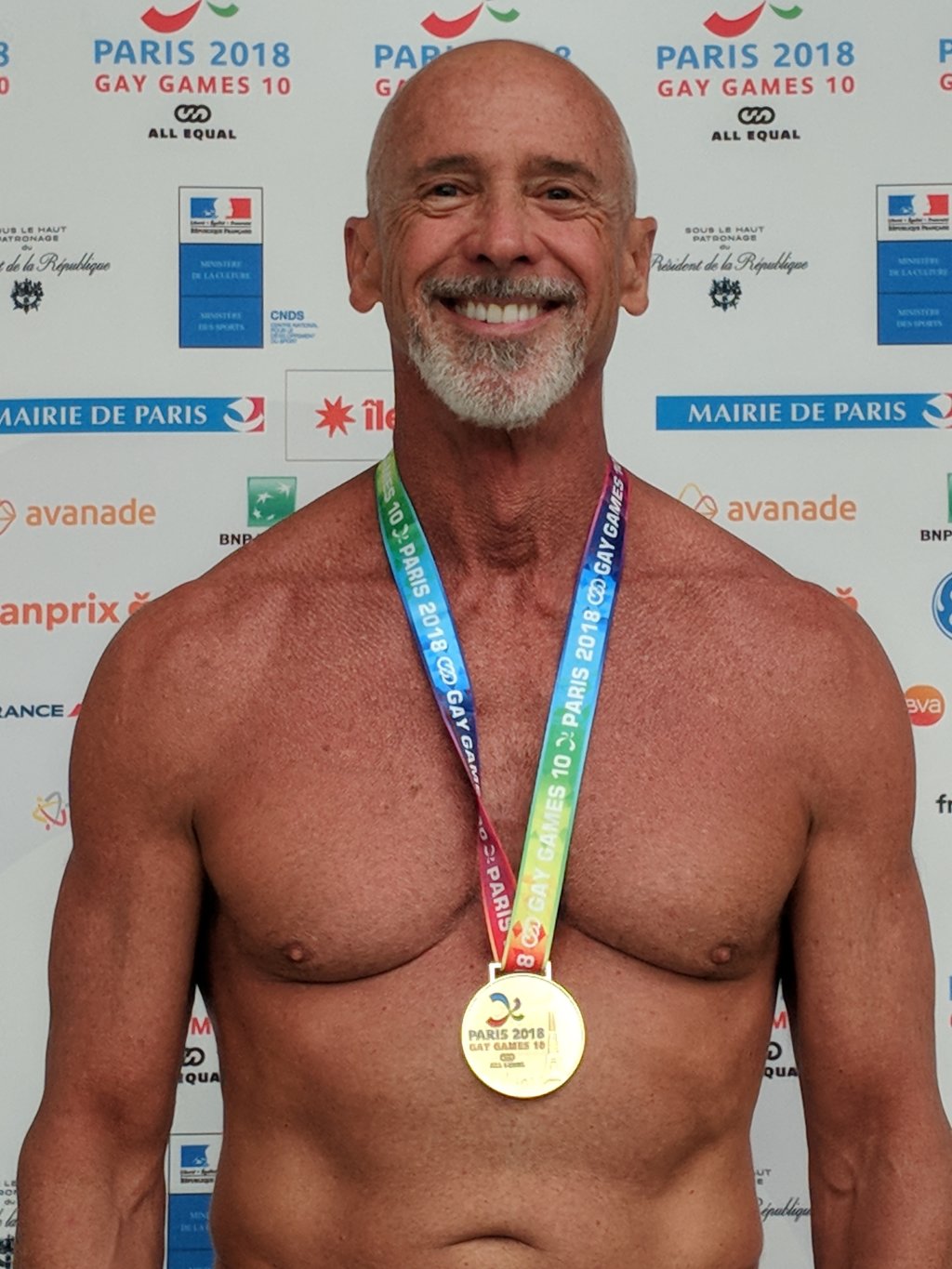 Even Gay Games X’s host country isn’t immune to homophobia. Back in March, queer travel site MisterB&B dubbed Paris “2018’s most Gay welcoming city in the world.” Yet, this LGBTQ love doesn’t always extend to mainstream athletics, such as wrestling.
“I was hearing constant criticism and insults against us gays,” said Paco Lambertino, a wrestler representing France. “People would say, ‘This isn’t really a sport for fairies.’ ‘This isn’t really a sport for faggots.’ It really became difficult to hear all these insults to keep it all inside. Because there was a part of me that was wrestling, but another part I couldn’t really express.”
Fortunately, Lambertino eventually found solace in an LGBTQ wrestling club. It’s somewhat ironic that a sport that revolves around physical conflict can also provide a safe space for queer athletes. And while parts of the world, including the US, inch towards nationalism, it increasingly falls on the shoulders of global LGBTQ groups such as Gay Games to steer mainstream society back towards progressive democracy, liberalism,  and, of course, civility.
Tags: News, Politics