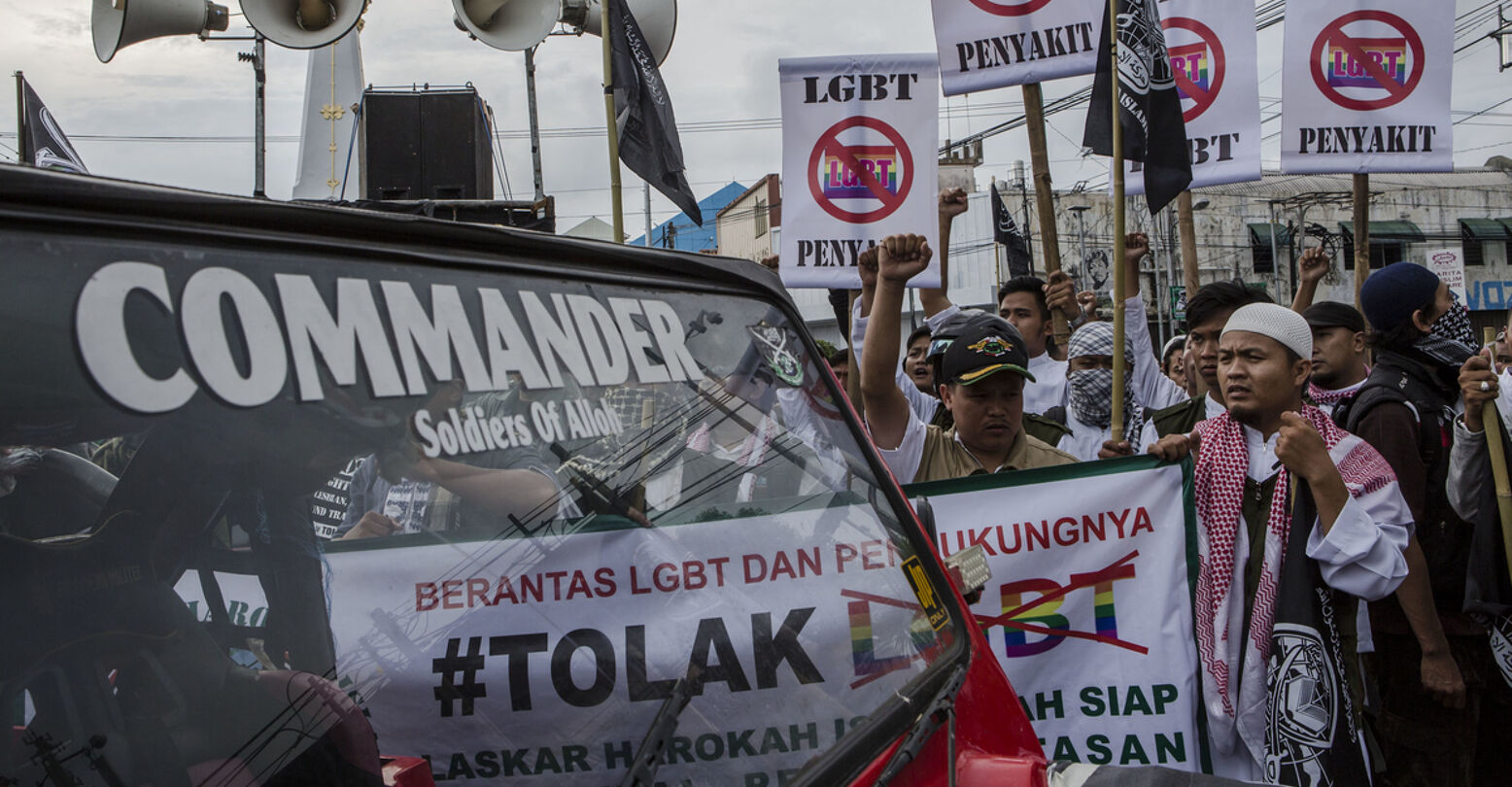 Police have apprehended 12 women accused by neighbors of being lesbians in Tugu Jaya, the latest Indonesian city to be targeted in a series of anti-LGBTQ sting operations.

The women’s home was raided on Saturday night following allegations from community members of “immoral activities” taking place in the shared residence. Local complaints included that the women had “short hair” and acted “as men.” Although there’s no confirmation about whether the occupants were LGBTQ, the residents worked together at a garment factory.

“It’s not acceptable to have female couples living together,” he said. “It’s obscene.”

What’s worth noting in the Human Rights Watch report is that authorities claimed that the housing situation contravened Sharia law. But the province of West Java, where Tugu Jaya is located, isn’t under the authority of Islamic codes. Aceh, a historically independent territory, was granted special permissions in 2005 to govern through Sharia regulations. It’s the only province with such authority.

Aceh made international headlines when two men were caned 83 times in May for being in a same-sex relationship, but Indonesia has witnessed a wider crackdown on LGBTQ lives in the past year.

Although the majority-Muslim country has historically been permissive toward queer and trans people, that began to change last year following a series of homophobic remarks from government officials. Mohammad Nasir, minister of research, technology, and higher education, “forbid” the existence of LGBTQ student groups in a January 2016 statement. He said they are not “in accordance with the values and morals of Indonesia.”

Those comments, while seemingly isolated, had a galvanizing effect. They served to ignite opposition to the very existence of LGBTQ people.

The nation’s top Muslim clerical body, known as the Indonesian Ulema Council, would call for the “stern prohibition of LGBTQ activities and other deviant sexual activities” in a statement released just a month later. It also advocated for the adoption of “legislation that categorizes” same-sex behavior as a “crime.”

The country’s queer and trans population have felt the weight of that recent backlash. In addition to a rise in anti-LGBTQ hate crimes, gay spaces have faced a constant assault by authorities.

The same month that 14 men were arrested in Surabaya during what authorities claimed was a “sex party,” a Jakarta sauna known as a gay “hot spot” was ransacked by police. More than 140 men were arrested during the May raid. Detainees were allegedly forced by police to take an HIV test, and reports claim that the results of those tests were subsequently publicized.

But according to the United Nations, the forced eviction of LGBTQ residents predates even the recent backlash.

A 2013 report from the General Assembly’s Human Rights Council noted “several” cases of housing discrimination against queer and trans people in Indonesia, primarily by landlords. The Special Raconteur concluded that these abuses are a “gross violation of a wide range of internationally recognized human rights” and recommended that the country take steps to protect LGBTQ groups.

Although President Jokoki has claimed that Indonesia does not permit “discrimination against anyone,” his government has done little to address these issues.

Following the Saturday raid, authorities say the 12 women taken into custody have been “asked to leave” Tugu Jaya. Chief Sumantrai, the head of local law enforcement, told the press that their presence in the South Sumatran village “created a public disturbance in the area.” He added that the local community could “become anarchic” if action weren’t taken to remove the women.

Human Rights Watch noted that the group’s whereabouts are currently unknown. Andreas Harsono, the organization’s senior Indonesia researcher, condemned the raid as yet another in a long history of LGBTQ rights violations.

“What’s most offensive about this incident is that police and government officials steamrolled privacy rights and rule of law to appease the bigotry of a few neighbors,” Harsono said in a statement. “Evicting these women based on prejudiced assumptions of their sexual identity threatens the privacy of all Indonesians and has no place in a country whose motto is ‘unity in diversity.’”

This isn’t the first time the women were evicted due to the perception of their sexual identity. Reports claim they were previously forced out of Kutajaya, a nearby town.