LGBT nerds have been around a long time, but only recently have they started taking up space — both digitally and physically. Conventions such as GaymerX and Flame Con have popped up in the last five years, providing a queer centric event space for people who often feel marginalized from mainstream gaming and comic spaces.

The problem is that these inclusive events often only occur in metropolitan areas on the east and west coasts. Flame Con takes place in New York whereas GaymerX has its main convention in San Francisco (and launched GaymerX East in 2017, which also took place in New York).

Obviously not everyone has the ability to travel to one of these coastal events, and that leaves a large part of the LGBT community underserved. One organization that is trying to fill the cultural void is Flaming River Arts, a nonprofit based in Ohio that is currently organizing Flaming River Con. This convention, which will take place on September 22 in Rocky River, Ohio — a suburb of Cleveland — will be the first of its kind in the midwest.

I talked to Brittney Orcutt and Logan Dorado, the President and Vice President/Treasurer of Flaming River Arts. I asked about the upcoming convention, their previous events and what it means for them to bring their community to the LGBT folks in their area.

As Logan and Brittney told me, most of queer culture in Cleveland revolves around the nightlife scene. Which can be a problem, because bars and clubs are restricted to younger people and are “frequently unwelcoming to women, [people of color], plus size people, femmes, and anyone who doesn’t fit into the typical white gay cis narrative.”

Originally they just had the idea for the convention, but when they got into the specifics they realized they would need to create a non-profit organization as well. “So it started off as this single idea, and snowballed into a full non-profit with year round programming and events,” Brittney said.

The most successful of those events leading up to the convention was the Queer Prom, which was available for folks as young as 17 — literal high school students. Logan told me that one of the most touching aspects of the Queer Prom was “being thanked by folks who didn’t feel comfortable or were unable to attend their own high school proms as themselves in the past.” 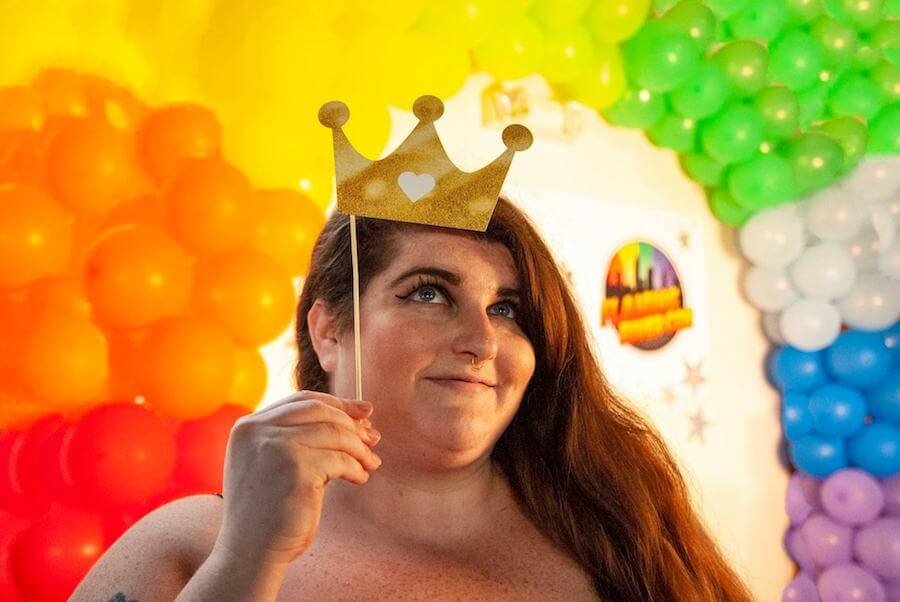 “We did have a great turn out from high school students, and it was so fun! They had a ton of energy and kept dancing long after the rest of us needed to sit down,” Brittney added. “It was actually quite emotional for a lot of attendees to see, so many people commented on how this is the community they want, this is who they wanted to be in high school but were unable to do so.”

Given the state of U.S. politics, it’s nice to be reminded of the localized ways that people are helping each other. I asked the organizers what this specific event meant to them and why they decided to serve their community like this.

For Logan, it’s been about presenting something that wasn’t available during his childhood. “As a queer, trans, Filipino-American man, my identity doesn’t get much representation in the mainstream geek work … Founding Flaming River, hosting this con – it’s my way of paying it forward. I want to give the LGBTQIA+ community events and spaces I needed when I was growing up.”

Brittney said that for her it was about taking action on the things she spends time complaining about. “No welcoming spaces? Change it. We have spent a year planning this convention, and it’s been a labor of love. This is our gift to our community and to our city. There have been tears, panic attacks, long conversations of ‘why are we doing this?,’ But we did it, it’s here, and it’s a creation of love, pride, and joyful defiance.”

The pair said that going forward they’re looking to host more events and mentioned that other cities have shown interest in bringing the convention to their areas. “Maybe down the road we’ll expand to touring. Who knows! For now, we just need to get through the weekend!”

To learn more about Flaming Arts Con, you can check out their schedule over at Cleveland Scene.