An Italian firefighter could lose his job after his department threatened disciplinary action for marching in the country’s Pride parade.

Costantino Saporito, who is straight, made history on June 10 when he became the first firefighter to openly participate in Rome’s yearly Pride marcha massive celebration which attracts thousands to the Italian capital. Although firefighters and police officers regularly turn out for the festivities, public servants are not allowed to join the fray in an official capacity.

The 44-year-old, who also works as a trade unionist, walked in last year’s parade, but this time, Saporito brought his bunker gear with him. He marched with a sign reading: “My Freedom Protects Yours.”

In an exclusive interview with INTO, Saporito confesses that being invited to the Pride parade, where he marched alongside fellow labor organizers, was “a little scary at first.” But as soon as he started marching that day, everything changed. The experience, Saporito says through the use of a translator, was “mind-blowing.”

“The joy that you can feel, breathe, and experience there was contagious,” he explains. “You have people from all walks of life coming together to fight for what they believe in.” 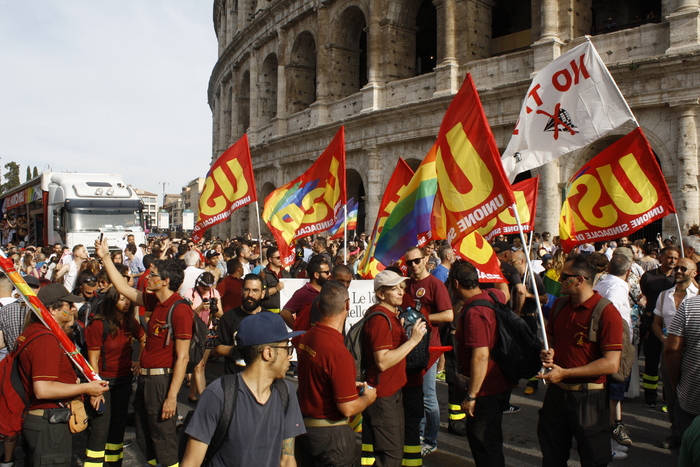 But nearly a month after marching in the parade, Saporito received a written letter on July 7 informing him that he could face disciplinary action as a result. Signed by the Minister of the Interior, the document states that Saporito’s participation required “prior consent.” The statement adds that his actions opened the firefighters’ corps to “public mockery.”

In response to the letter, the international LGBTQ rights group All Out iscirculating a petition to prevent Saporito’s dismissal. Thus far, the petition has collected 53,000 signatures. The goal is 60,000.

Saporito says that the notice came as a “surprise.”

“I was marching with the trade union,” he says. “That’s who I was representing, not the firefighters. I wore my uniform because that’s my job. And technically there’s no regulation that requires me to get permission to wear my uniform. I don’t understand how that can be an embarrassment.”

While Saporito’s department has yet to investigate the complaint, advocates say this incident underscores the few protections that LGBTQ peopleor even their allieshave in a nation that lags behind on civil rights.

A decree from the European Union forbids discrimination in the workplace on the basis of sexual orientation, but that doesn’t stop LGBTQ people from being targeted in other ways. An Italian bed-and-breakfast made international headlines in 2017 for forbidding “gays and animals.” As anti-LGBTQ hate crime rates in the country remain high, five transgender people were murdered last year. 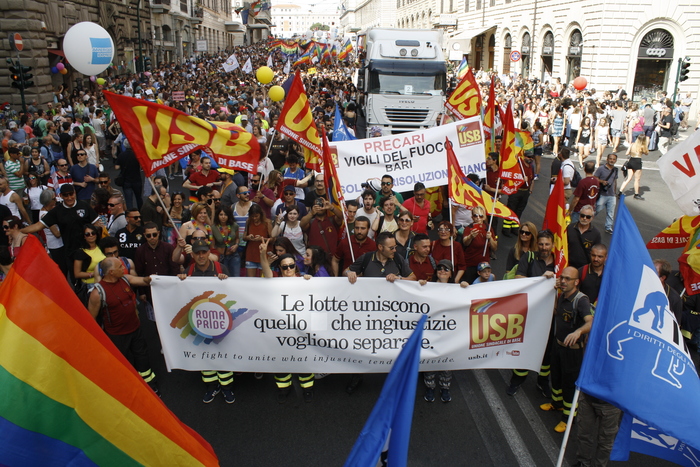 Although civil unions finally passed in 2016, ILGA-Europe called Italy one of the worst countries in Western Europe for LGBTQ rights in a recent report.

Sebastiano Secci, a spokesperson for Roma Pride, says that Italy’s struggle to make progress on LGBTQ issues is largely due to the “huge cultural and political influence” of the Vatican in the overwhelmingly Roman Catholic country. Nearly 88 percent of the population claims to be a member of the Catholic faith.

But Secci also cites the lingering stigma of the HIV epidemic as halting forward momentum on equality.

“We saw in the 70s and early 80s some steps forward for LGBTQ rights,” he says through the use of a translator. “In 1982, Italy passed one of the world’s most progressive laws, allowing trans people to change their gender marker. But the coming of HIV/AIDS gave an incredibly powerful weapon to bigots and conservatives who want to stop progress.”

Despite being heterosexual, this issue is a surprisingly personal one for Saporito, who claims that growing up in an orphanage helped him understand the sting of discrimination. He explains that for many years, orphans were thought to be “mentally ill.”

Mario Colamarino, the president of Italy’s Mixed Gay Circle of Culture, believes that Saporito’s case is a chance for a country with a tortured history on how it treats marginalized populations to make overdue progress on equality.

“In other countries, people who work in the police and army participate in the parade officially,” says Colamarino, pointing to Pride events in the United States and the United Kingdom. “Italy is a participant in the G7, the seven countries with the biggest economy. If it’s a leading economy, Italy also needs to be a leader in anti-discrimination and human rights.”

No matter the outcome of the disciplinary hearings, Saporito is ready to march again at next year’s Pride event.

“I will force the parade organizers to have me again,” he says with a playful smirk. “Freedom of assembly, freedom of association, and freedom of speech cannot be persecuted, charged, or put on trial.”

Note: Some quotations were condensed for clarity.