In the wake of the 2018 midterm elections, political pundits noted that the so-called “blue wave” turned out to be more of a rainbow. With over 150 LGBTQ candidates winning races across the country, Tuesday was a night of many firsts: a gay governor in Colorado, lesbian congresswomen in Kansas and Minnesota, two trans women in the New Hampshire state legislature, and the list goes on.

However, it was one Republican incumbent’s loss in a closely-watched race in Kentucky that set the Internet ablaze. I’m talking, of course, about Kim Davis, who came up about 700 votes shy of her Democratic opponent, Elwood Caudill, Jr., in her re-election bid to the Rowan County Clerk’s Office.

Following her loss, national media outlets from the New York Times to the Advocate ran clickbait-worthy headlines, and incendiary status updates spread across social media like wildfire. In the midst of all the righteous schadenfreude over Ms. Davis’ fate — well deserved as it was — one person was conspicuously missing from the national conversation: David Ermold.

For those who may have forgotten, David Ermold is the gay man who, along with his partner, was denied a marriage license by Kim Davis back in 2015. After the incident, which quickly went viral, Davis was briefly jailed for contempt of court and then (ghost) wrote a memoir about her experience titled, Under God’s Authority, while Ermold fought back with his own campaign for her job. Ermold decided to run as a Democrat for the clerkship and energized supporters eager to see a bitter showdown between ideological opposites in the culture wars — garnering national attention with a segment on Comedy Central’s The Daily Show with Trevor Noah and attracting high-profile donors, such as Amy Schumer and Susan Sarandon. Despite all the buzz from outsiders, Ermold ended up losing soundly to Elwood Caudill, Jr. in the primary election in May.

Then, just as quickly as the spotlight emerged on the otherwise quiet town of Morehead, Ky., a town of just over 7,000 people, the cameras all but disappeared after the primary, and David Ermold became another name lost in the media frenzy. Hardly anyone outside the state noticed, for example, that Ermold refused to support Caudill, who won the Democratic nomination by over 1,000 votes. If they did notice, no one bothered to dive deeper and ask why. (Ermold did not respond to an email request for an interview for this story, and, as far as I can tell, has avoided most other media outlets since the primary.)

Despite allegations that Caudill had used homophobic slurs in the past, C-FAIR, the political action committee of the Kentucky Fairness Campaign, the state’s largest LGBTQ advocacy organization, endorsed Caudill in the general election. In a series of tweets following the primary, Ermold posted a screenshot of a private message from Caudill, in which the nominee said same-sex marriage “wasn’t my fight then,” referring to the skirmish in 2015.

Moreover, according to Ermold, Caudill once stated in a public forum that his opponent didn’t know what it was like to worry about safety while working in the courthouse during the high-profile protests, both for and against marriage equality — the suggestion being that it was Ermold’s insistence on lawfully obtaining a marriage license rather than Davis’ refusal to comply with the law that caused security issues for employees in the Rowan County Courthouse. Caudill’s tone-deaf statement about safety was astounding, coming from a straight man who has never had to live with the daily fear of simply existing as a queer person in eastern Kentucky — or anywhere else in the U.S. for that matter.

David Ermold’s worries about homophobic retaliation to his campaign turned out, unfortunately, to be well founded. After publicly announcing his campaign in March, the University of Pikeville, a private Christian college where he taught as an English professor, decided not to renew his contract. Kentucky is one of 29 states with no protections against employment discrimination based on sexual orientation or gender identity. Furthermore, despite being introduced into all but one congressional session since 1994, the Employment Non-Discrimination Act, or “ENDA,” which would codify such protections into federal law, has yet to be passed and last died in the House of Representatives in 2013. 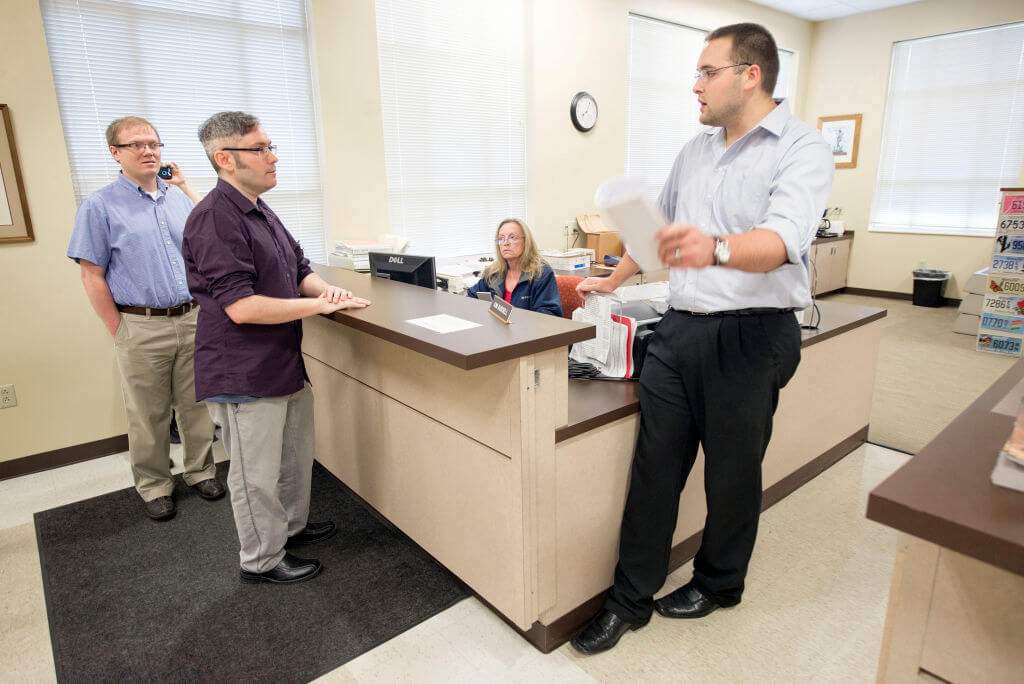 On the day of the general election, David once again took to Twitter to communicate directly with his followers, posting a picture of his ballot where he wrote in “Against Homophobia,” rather than choosing either candidate. The responses to his tweet were telling: “Are you serious? Good thing you didn’t win I guess,” remarked one user. “Did you not learn anything in 2016?” scoffed another sanctimoniously. Most puzzling, however, was a user who seemed to confuse Ermold for Caudill, chastising Ermold for not voting for himself in the race.

The peanut gallery, as it is wont to do, simply talked at the former candidate instead of listening and engaging in dialogue. In the process, Ermold’s genuine and trenchant critique of the role homophobia plays across party politics was completely drowned out. Following Tuesday’s election results, it appeared that Kim Davis continued to dominate the headlines, appearing front and center in a spotlight she didn’t deserve in the first place. Meanwhile, David Ermold’s perspective was all but lost in the noise — another queer voice marginalized by our culture’s need to keep heterosexuality in the center of the conversation.

As someone who was born in Morehead and grew up in a small town nearby, my sense of the election is that Kim Davis’ loss had less to do with LGBTQ acceptance, or the blue wave, than it did with a desire among locals to put an end to the media circus once and for all. For the same reason, Ermold lost the primary, Kim Davis was booted from office. Both candidates, in the minds of many Kentuckians, were perceived to be motivated by fame more than anything else; and if there is one thing people in my home state can’t stand, it is self-aggrandizement. “Don’t get too big for your britches,” my mother used to say.

There were many reasons beyond marriage for the citizens of Rowan County to vote against Kim Davis: nepotism, for starters. Her mother served as clerk before her, and though not technically illegal, Ms. Davis hired several of her own relatives while in office. But, as Tom Eblen pointed out in a column in the Lexington Herald-Leader, the more likely reason voters turned against Kim Davis was her refusal to follow the rule of law. The consensus seemed to be: Just do your job and don’t make us a laughing stock of the nation.

People from across Appalachia share a sensitivity to “othering” by outsiders, due in large part to a long history of sensationalized media portrayals of the region as barbaric and backward. While it would be a mistake — and a dangerous one at that—to downplay the real struggles queer and trans Appalachians face every day, the lesson from this election should be that anti-LGBTQ discrimination is a pervasive problem, one that is certainly not unique to rural America.

With a daily stream of hateful rhetoric coming from the current administration, along with its terrifying policy proposals aimed at erasing our communities, we would all do well to band together in these trying times. We must hold each other up and amplify the voices of our unsung heroes: the David Ermolds of the world.

Still reeling from his upset in the primary, David snapped a picture of a Confederate flag waving on the side of the road near his home. His caption for the photograph, and the sheer courage of his campaign, offer a glimpse into two competing political visions playing out on a national scale at the current moment: the divisiveness of hate and the unifying force of love. “Here’s the truth of what we faced in Rowan County,” he wrote. “LOVE MUST WIN.”

Here is the truth about what we faced in Rowan County. LOVE MUST WIN. pic.twitter.com/ZD5VQeMLWU