Bloodroot Vegetarian Restaurant has been a beloved staple of Bridgeport, Conn. for more than 40 years, serving up feminist-influenced plant-based fare to the likes of Audre Lordre and Adrienne Rich, as well as dedicated locals. But a recent review alleging that owners Selma Miriam and Noel Furie reject transgender customers has set off a firestorm online.

For many, the fallout has echoes of the Michfest debate, which divided LGBTQ women for more than two decades. And while the review has since been removed, it appears in screenshots on Facebook, and Bloodroot’s own statement in response has kept the conversation going.

In the review from late December, a customer writes that upon a visit to Bloodroot, she was having lunch with a friend when she began speaking with Miriam and Furie about up Lorde having been a friend of the restaurant. The conversation turned to the customer’s own dream of having a “queer and trans intentional community and sanctuary.”

“Immediately Selma and Noel looked at one another and Selma said, ‘[W]e strongly believe in supporting only women born women here,” the customer alleges. “‘[W]e are disgusted by men who think they can put on dresses and nail polish and pump themselves up with nail polish and pump themselves with chemicals and say they are women. [T]hey just aren’t. and we will never support them.'”

The customer then she she felt uncomfortable and afraid, and is now advocating that others “refuse to support them and encourage others to do the same.” 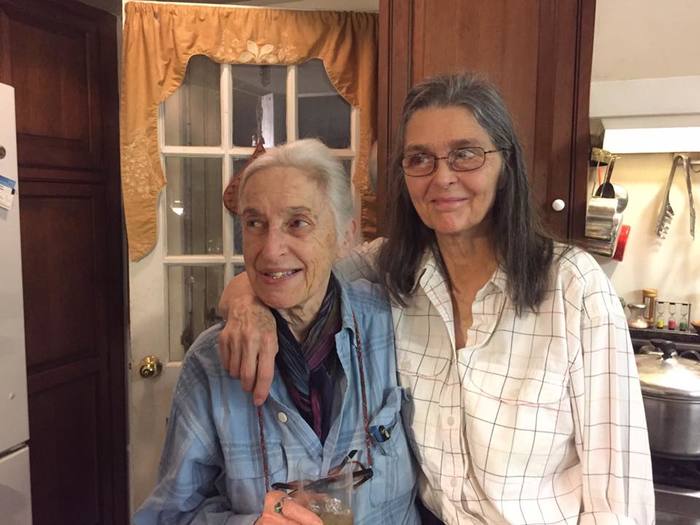 Both Miriam and Furie declined to be interviewed for this piece, but in a Dec. 31 statement posted to their Facebook page, Bloodroot says the controversy stemmed from a conversation with a new customer who asked if they knew of an establishment that catered to trans people.

“We didn’t,” the statement reads, “but since we are not trans, it wasn’t all that interesting to us personally and stated that for us, we prefer women only spaces. This comes from our history. When Bloodroot first started in the 70’s [sic] we were trying to create a space specifically safe for women, since there were so few places like that at the time. Of course even back then we were open and welcoming to everyone, not just women.”

The post goes on to say that customer misunderstood that reply and wrote a post online slamming Bloodroot.

“We understand this is a subject matter that many people are passionate about, but we feel this anger is misguided and misplaced,” Bloodroot says in the statement. “Regardless of how you feel about Bloodroot’s stand on this, we will continue to be a welcoming space for all types of people, including those that are transgender, and treat everyone with respect.”

The restaurant’s post has more than 1,200 likes and 300 comments. It notes the controversy has spurred violent threats and trolling against the restaurant.

Rachel Young, a trans woman who has been following the fallout, says Miriam and Furie have silenced trans women and their supporters who tried to engaged with them.

“I saw that the [Bloodroot] post asserted strongly that the owners are not transphobic while simultaneously separating trans women from ‘women,’ or at the very least failing to make any statement to the contrary.” she tells INTO. “People began responding very actively, and at first, there were more non-confrontational trans supportive comment than not. All of them were immediately deleted and their posters were blocked from commenting further.”

Young has set up her own Facebook page, Bloodroot Vegetarian Restaurant Open Discussion, for trans people and allies whose comments have been deleted.

Many of the comments that remain on the restaurant’s post are explicitly transphobic, denying the womanhood of transgender women and going as far as to suggest they are entitled men.

“Lol so these people force sane people to call them women?” one commenter asks.

“Dear Bloodroot, this was not an accidental misconstruing,” comments a third. “This is the new wave of trans activism now, and the reason that women’s-only space and lesbian space has been disappearing as of late. (You’ll notice the same doesn’t happen to men’s only or gay, which are alive and well.) It is a calculated move that pretends to be about freedom and love but is patriarchal and woman-hating to the core.”

Bloodroot is not just a restaurant, but a bookstore and community space that offers cooking classes, art shows, and a place for women to hold meetings and other communal conversations. (The original collective also included Pat Shea, Betsy Bevan, and Samm Stockwell ). Miriam, a writer, and Furie, a photographer, have published several Bloodroot cookbooks over the years (as well as other texts under Sanguinaria Press), and on their 40th anniversary last spring, Emily Larned published a book about their history. (There was a New York Times profile, too.) 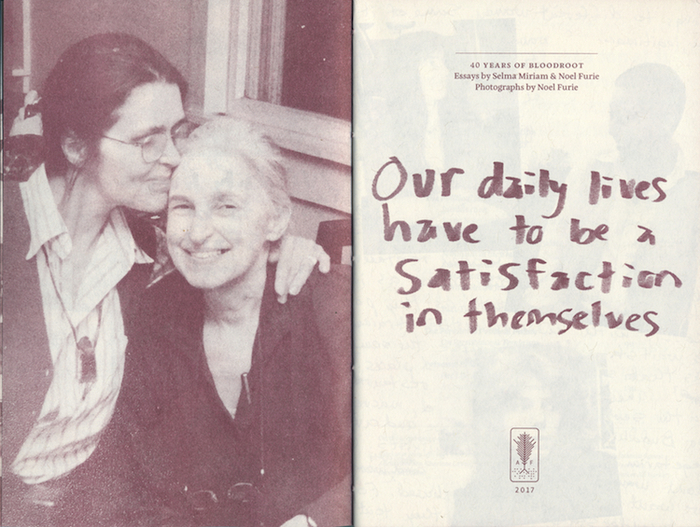 “Here were women who framed their lives by their beliefsthrough reading, writing, cooking, gardening, handcrafts, publishing, and nourishing their community, literally,” writes Learned in her publisher’s introduction for 40 Years of Bloodroot. “Regardless of the specifics of our politics (which may or may not differ from those outlined in this book), many of us are starved for examples of how to live, everyday, in accordance with our values.”

In 2010, Miriam and Furie donated their archives to Yale Library. The collection includes letters, documents, and photos from fans of Bloodroot including Rich, Lorde, Rita Mae Brown, Alix Dobkin, Dorothy Allison, Sarah Schulman and other famous writers and lesbian feminists.

“We’re really very, very proud to be part of the Yale Library and the archives there,” Furie told the Stanford Advocate. “I think the whole notion of saving (materials about) feminism and art is a wonderful thing. We need that.”

Young says she doesn’t want the businesses to go away; she just wants to start a conversation about accountability.

“It reinforces the idea that LGBT folks are connected, for better or worse,” she says, “and it might make others think twice before excluding others.”