Fliers handed out by anti-trans groups at London Pride over the weekend claimed the acceptance of transgender people is akin to “conversion therapy.”

The one-page leaflet handed out by members of “Get the L Out,” a trans-exclusionary radical feminist group which pushed its way to the front of the Saturday parade, alleged that “trans politics… promotes the social transition of lesbians.” The group further claimed that transgender people encourage lesbians “to present as straight men, thus favoring the pretense of heterosexuality over lesbianism.”

“This is nothing more than a form of conversion therapy,” the organization concluded.

Get the L Out also alleged that allowing transgender people to medically transition through the use of hormones and gender confirmation surgery “pushes harmful drugs as well as unnecessary medical practices on perfectly healthy bodies.”

“These are a form of misogynistic medical abuse against lesbians and all women,” the flier handed out to London Pride attendees continued.

Lastly, Get the L Out said the acceptance of transgender people promotes sexual assault. An LGBTQ movement that’s inclusive of trans people, it claimed, prioritizes “the rights of heterosexual males who ‘identify’ as women… over the rights of lesbians to choose their sexual partners.”

“This new ‘queer’ LGBT politics coerces lesbians to accept the penis as a female reproductive organ and promotes heterosexual intercourse between male and female as a form of lesbian sex,” the group said.

“This is simply a new face to rape culture and compulsory heterosexuality,” it added. 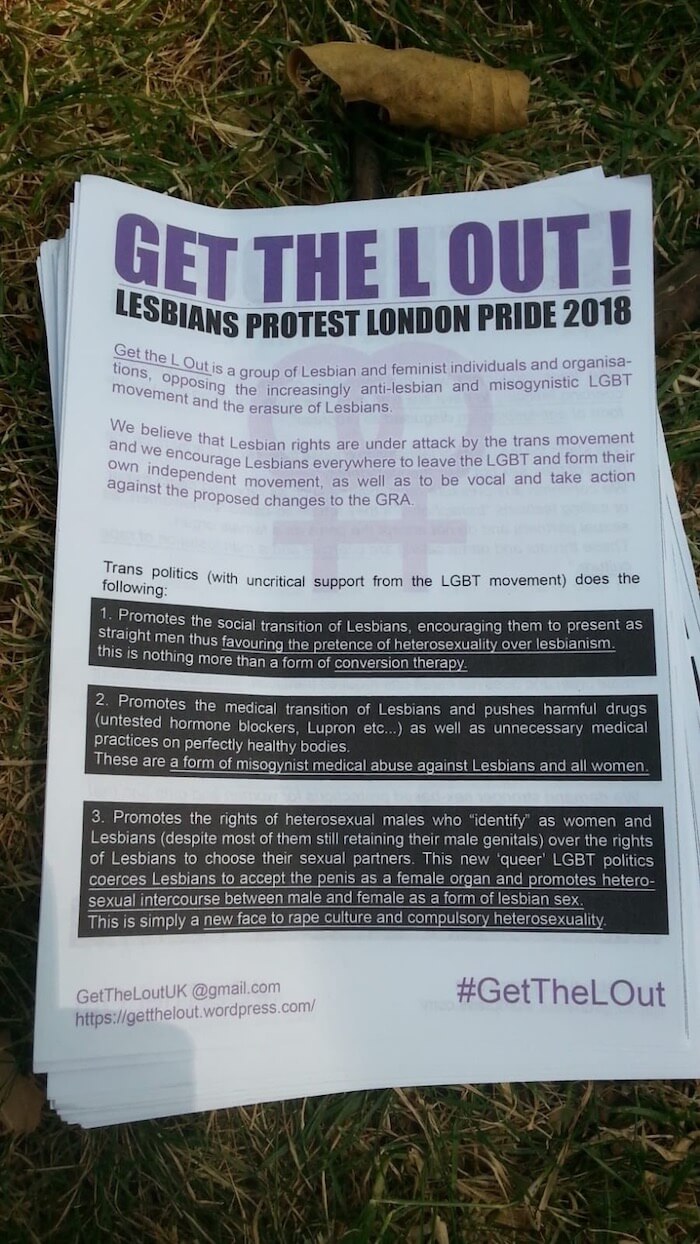 INTO reached out to Get the L Out several times over the weekend to clarify its remarks, including that “lesbian rights are under attack by the trans movement.” The organization did not respond.

“We know that nearly half of all trans individuals have attempted suicide, and 92 percent of those attempts occur before the age of 25,” Sam Brinton, Head of Advocacy and Government Affairs with The Trevor Project, told INTO. “Trans youth are a vulnerable population and exclusionary groups that work to ostracize these identities only further the harm and discrimination these young people face.”

Conversion therapy (also known as reparative therapy) is the common term for the discredited practice of attempting to change the sexual orientation or gender identity of LGBTQ youth. It has been condemned by every leading medical association in the U.S., where 13 states (and D.C.) have outlawed the “gay cure” treatment.

Most recently, the U.K. government signaled its intention to ban conversion therapy following a survey which revealed that five percent of respondents had been offered reparative treatments at some point in their lives.

Pride in London, which organizes the yearly parade, called Get the L Out’s platform “shocking and disgusting.”

“We reject what this group stands for,” the organization claimed in a press release. “They do not share our values, which are about inclusion and respect and support for the most marginalised parts of our community.”

That statement was released after representatives of Get the L Out pushed themselves to the front of the 2018 London Pride Parade, which was reportedly attended by more than one million people. Although Mayor Sadiq Khan was scheduled to lead the procession with staff members from the National Health Service, London Pride organizers said they could “not forcibly remove the group as their protest was not a criminal offense.”

“They demanded to march behind the rainbow flag, which marks the official start of our parade,” Pride in London claimed. “We did not allow that as we did not want to legitimise them or their message. We moved them to an area far in front of the official parade start to separate them.”

“We are looking at what we could do differently if something like this happens again,” organizers added.

Pride in London initially blamed the incident on the weather, claiming that the 86-degree heat kept them from taking more decisive action against Get the L Out. But following extreme backlash toward allowing a group which advocates that lesbians divorce the LGBTQ community over trans inclusion to lead an LGBTQ event, they finally apologized the following day.

Pride organizers will reportedly be meeting with the Metropolitan Police and Westminster City Council in the coming days to address these issues and discuss an action plan for future events.

While Pride in London has apologized for the mishap, Get the L Out has refused to back down in the days since. In a statement released after the South London group TransPALS, European Pride Organisers Association, and Mayor Khan condemned its actions, the TERF group reiterated its claims that allowing trans people to be part of the LGBTQ community promotes rape culture.

“We protested to protect our rights and on behalf of all the lesbians intimidated, threatened and silenced by the GBT community everywhere,” Get the L Out alleged.

“The GBT community today, by supporting the rights of males who ‘identify as lesbians’ (also called ‘transwomen’) over the rights of lesbians to choose their sexual partners (on the basis of their sex, not how they ‘identify’) is in fact enforcing heterosexuality on lesbians,” the organization continued. “This is a misogynistic and anti-lesbian manifestation of the rape culture we live in.”