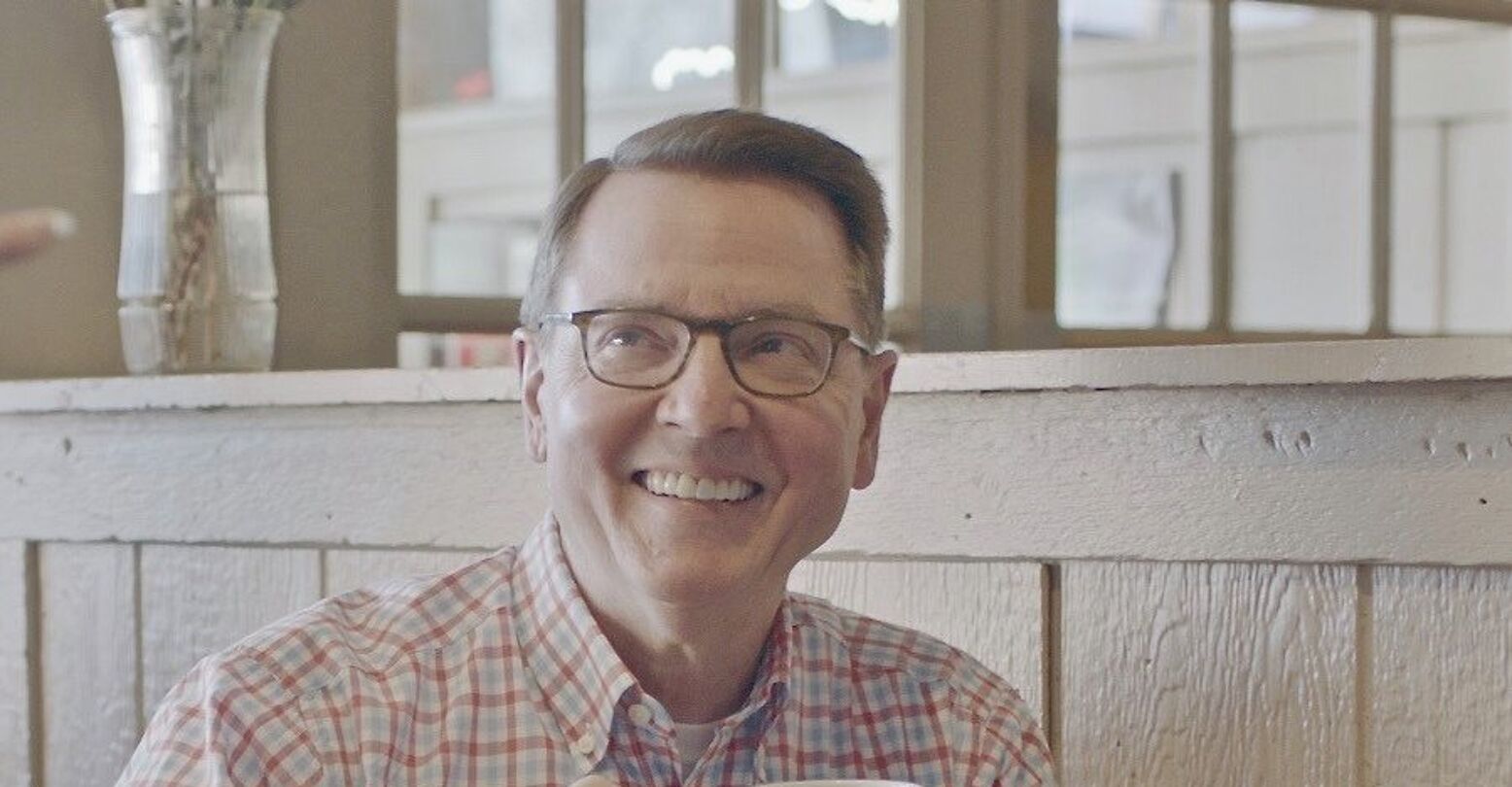 It’s a typically hot day in Kentucky’s second-largest city, a town most-widely known for its horse racing and college basketball. But in the final days of Gray’s primary campaign for the U.S. House of Representatives, the excitement for his candidacy is palpable. Walking by a stretch of parked cars, three vehicles in a row sport “Jim Gray for Congress” bumper stickers.

The front page story in the Lexington Herald-Leader is an op-ed supporting his candidacy: “Jim Gray wants to put America ‘on the right track.’”

That theme is a major focal point of a speech delivered to supporters last Wednesday in which Gray tells an audience gathered at the city’s historic Dr. Thomas Hunt Morgan House that America needs “adult supervision in Washington,” a line greeted with enthusiastic applause and laughs from the room.

“The amateur hourit’s time for it to be over,” Gray claims, referencing the president in all but name. 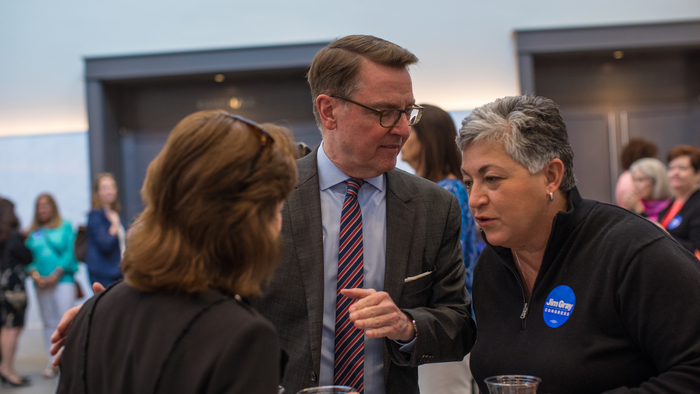 The two-term mayor, first elected in 2010, is running on experiencea platform that has pitted him against his closest rival, Amy McGrath. A political novice who attracted attention earlier this year with a video highlighting the obstacles she’s overcome as a female fighter pilot, McGrath campaigned on her outsider status during a moment when Americans are turning to unconventional candidates.

The veteran refers to her opponent as a “sort of standard politician” in a Sunday interview with CNN.

Although Gray was seen as the presumptive favorite in Kentucky’s 6th District, internal polls released by the candidates’ campaigns come to very different conclusions about who is leading in an unexpectedly contentious race. Gray’s polling shows the incumbent mayor ahead by a massive 33-point margin, while McGrath’s team claims she leads by seven.

Either candidate would represent history being made in Kentucky. McGrath would be the state’s first female Congressperson, while Gray would represent the first openly LGBTQ official in the House of Representatives.

Gray came out in 2005, two years before his election as Lexington’s first openly gay vice mayor. When he graduated to the mayor’s office in 2010, the businessman turned politician was just the second LGBTQ person to ever be elected to lead a major metropolitan city in the south. Houston’s Annise Parker was voted in just months prior.

The 64-year-old claims that he’s used to people telling him that he “can’t win.”

But the Democrat is hoping his record of accomplishments is what shines through on election day.

During his eight years as mayor, Lexington introduced electric buses and a needle exchange program to tackle the opioid epidemic. Gray compares the latter to the early days of the HIV/AIDS crisis when the public was “unwilling to acknowledge the reality.” He inherited a “healthcare crisis, a budget crisis, and a pension crisis,” adds local pastor and supporter Rev. Marsha Moors-Charles.

“Jim was able to balance the budget, work out pensions with police and firefighters,” she tells INTO over the phone. “The big thing that impressed me was that he developed a prescription program where city employees where can buy their prescriptions below cost.”

“He’s been a breath of fresh air,” adds Tim Burcham, a fundraiser who attended last week’s campaign event. “Lexington has come so far and we see it in so many ways.”

Each of these individualsboth of whom are openly LGBTQsay that what has also distinguished his time in office is that Gray’s sexual orientation hasn’t proven a major issue. When the mayor pushed for rainbow crosswalks following the 2016 shooting at Pulse nightclub, the biggest complaint was that they could potentially pose a “safety hazard,” a concern lobbied by the Federal Highway Administration.

The crosswalk, however, has not led to an uptick in accidents since it was installed last year. Cities like Atlanta, Philadelphia, and Seattle all have similar pro-LGBTQ displays.

But what Moors-Charles claims was unique about Gray’s response to the Orlando tragedyin which 49 people were killedis that he collected the police chief, fire chief, and other officials to tour local gay bars and discuss how Lexington could prevent a similar attack. They examined the layout of these buildings and discussed emergency response and evacuation techniques.

“Many of those [city officials] had never visited a gay bar in Lexington,” she says. “What they found is that by going to these places, they built some community and connection.”

Gray’s impact on Lexington, supporters say, was reflected in the Human Rights Campaign’s Municipal Equality Index last year. Scoring a 92 on the yearly survey of LGBTQ-affirming municipalities, the city boasted a 21-point jump from 2016. In the state of Kentucky, only Louisville scored higher.

Supporters say the mayor’s tenure is a sign the conservative state is changing. To date, eight municipalities have passed nondiscrimination ordinances outlawing bias against queer and trans people in housing and employment. 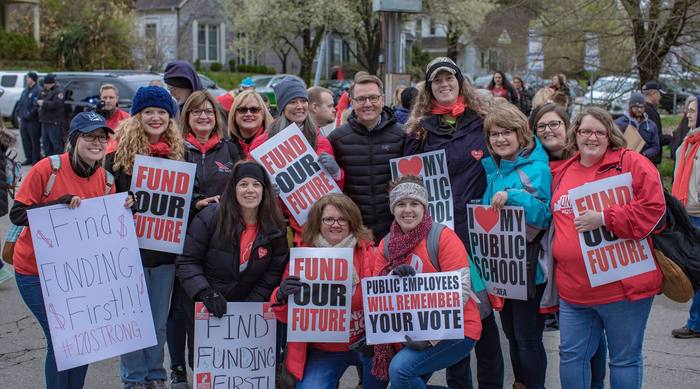 Just days before his interview with INTO, Gray says that a young man who had just received his Masters’ degree reached out to thank him for everything he’s meant to the local LGBTQ community. The young man is closeted, the politician claims, and seeing people like himself come out and be embraced for who they are gives him hope.

“There are many young people today in rural Kentucky and parts of the country where they’re still struggling,” Gray says. “I’ve been a role model. I’m proud of that. I’m proud of doing the job in a responsible way.”

But if Gray prevails in Tuesday’s Democratic primaries, he faces his biggest challenge at the state level. He will face off against incumbent Rep. Andy Barr, an anti-LGBTQ Republican who supported an amendment in 2012 limiting the federal definition of marriage to one man and one woman.

When Gray competed against Rand Paul for the Senate in 2016, the Republican won by nearly 15 points after leading throughout the campaign. Kentucky voted Donald Trump president in that election by a nearly 30-point margin.

But this time could be different.

Barr is seen as particularly vulnerable to a strong Democratic challenger during a “blue wave” in which liberals have overperformed in conservative districts across the country. In a generic Congressional vote conducted by FiveThirtyEight, Democrats lead Republicans by four percentage points.

The conservative incumbent has felt the ripple of changing tides in his home district. When the Republican appeared at a town hall meeting held at Richmond’s Montgomery County Courthouse in April, the Herald-Leader reported that he was frequently booed by constituents.

During what should have been a peaceful homecoming, the Lexington paper claimed Barr “couldn’t get a word in.”

After Gray announced his intention to compete for the House of Representatives in December 2017, Moors-Charles admits she was initially “worried,” describing those areas as predominantly “farmers and country folks.” Rowan County, in which Kim Davis sparked national controversy after denying a marriage license to a same-sex couple, is right next door to Kentucky’s 6th.

But while Gray may have lost the state in 2016, he fared very well in the 6th District: He earned the majority of votes in those counties. The significance of that milestone, just a year after Davis was jailed for five days, cannot be overstated.

Gray believes that Kentucky is ready to move forwardjust as it has so often throughout his career.