LGBTQ activists were among those arrested inside the Georgia State Capitol building on Tuesday at a protest over the state’s contested gubernatorial election.

Abrams trails by less than 55,000 votes in a contest her campaign claims was tainted by voter suppression. U.S. District Judge Amy Totenberg has ordered a review of provisional ballots critics believe may have been improperly rejected.

While Kemp has claimed his opponent is attempting to “steal the election,” protesters called for further action to ensure the voices of black, brown, and LGBTQ Georgians are heard. “Count every vote!” chanted the more than 100 protesters who gathered inside the Gold Dome of the capitol building on Tuesday. 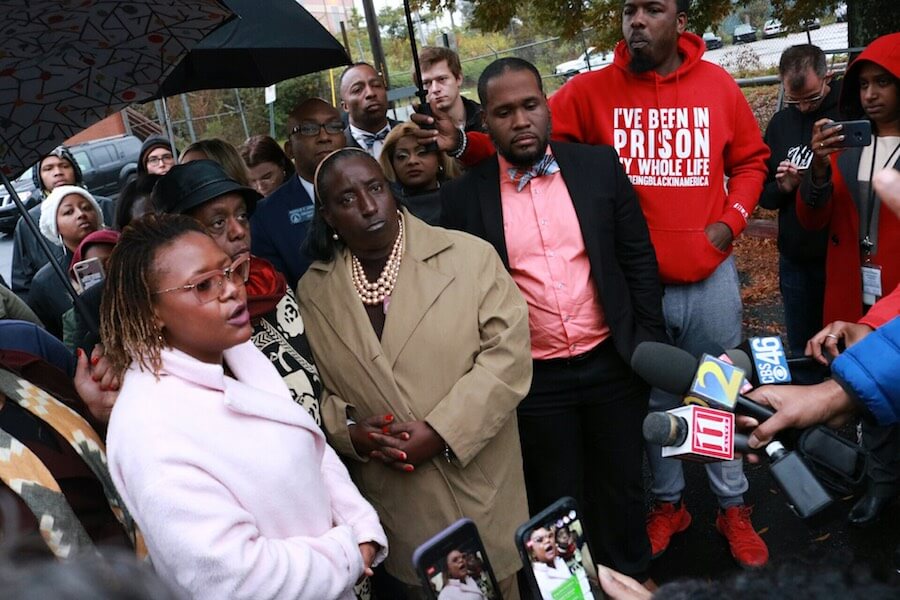 What organizers say was a nonviolent call for democracy ended in the detainment of more than 15 individuals. Arrestees included Democratic State Sen. Nikema Williams, who claimed she was being “singled out as a black female senator.”

Others claim queer and trans protesters were also targeted by police officers on duty.

“We were pretty shook after the events of the rally yesterday because of the reaction and the behavior of the Georgia State Capitol Police,” Jade Brooks, the regional organizing manager for SONG, told INTO over the phone. “They were literally picking people out of the crowd and targeting them, primarily black, trans, and gender nonconforming individuals.”

Brooks, who was present during the time of the arrests, called the behavior of law enforcement officials “frankly disgraceful.”

“One of the first people to be arrested was an older black woman representing the Black Lives Matter Atlanta chapter, who was thrown to the ground while she was standing there peacefully holding a poster board sign,” she added. “The next was a member of SONG, a black transgender man who was also thrown to the ground.”

According to Brooks, the trans protester had been “standing there like everybody else” prior to the alleged assault.

When INTO reached out to the public information office at the Georgia Department of Safety via email, a representative claimed the office had “no knowledge of any LGBTQ activist involvement.”

The department did not offer comment on SONG’s characterization of the arrests, however.

Those detained were taken to the Fulton County Jail. Among them were well-known LGBTQ activists Maxx Boykin, senior coordinator for policy, advocacy, and mobilization at the Black AIDS Institute; Devin Barrington Ward, communications director for D.C. councilmember Mary M. Cheh; and Mary Hooks, co-director of SONG.

At the time of publication, none were available to comment on the incident. However, Georgia State House Rep. Park Cannon alleged multiple abuses of the activists’ rights during their detainment.

“Two people were constantly misgendered while at Fulton County Jail,” she told INTO. “Miranda rights were never read to those detained.” 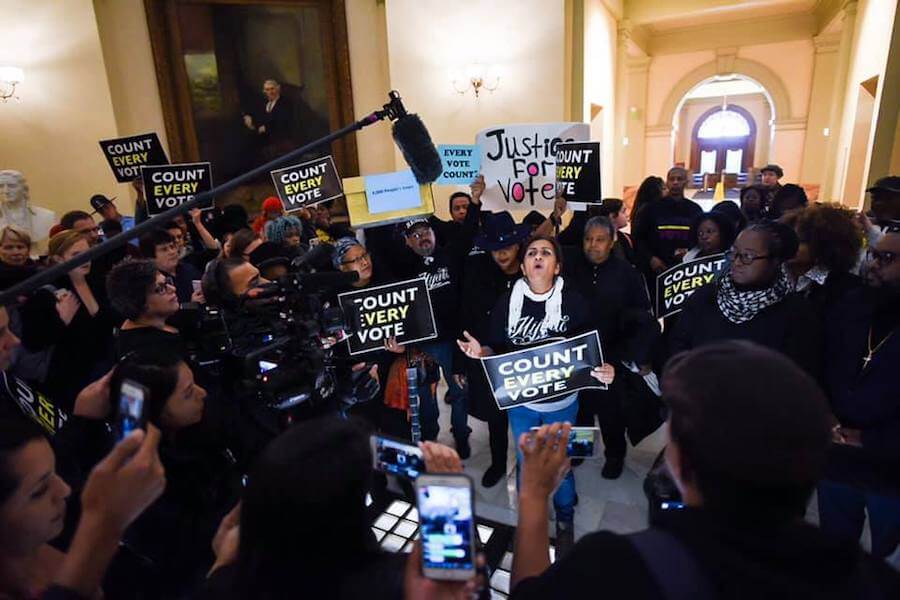 At the time of writing, 14 of the 15 detainees—who were allegedly held in a police van for 90 minutes prior to booking—have been released from Fulton County Jail. After SONG created an online fundraiser to assist individuals in raising bail money, Boykin, Hooks, and Ward were released on $3,000 bonds.

They face charges of disrupting a General Assembly session, classified as a misdemeanor.

Although SONG could not comment on whether the final inmate (whose name was not released to media) had experienced mistreatment during her detainment at Fulton County Jail, organizers described the situation as “horrendous.”

“We’re thinking of her and doing everything we can to get her out,” Brooks said.

LGBTQ detainees renewed the call for justice following their release. In addition to dropping all charges against them, community members say Tuesday’s altercation shows the urgency of this race.

According to SONG, many Georgians weren’t able to vote on Nov. 5, facing long lines or polling places that ran out of ballots.

“This is unacceptable,” Hooks claimed in a press release. “In a state where thousands organized to extend the vote to black people in the great tradition of the Southern Freedom Movement, we find ourselves facing enemies trying to take us back to where our grandparents started.” 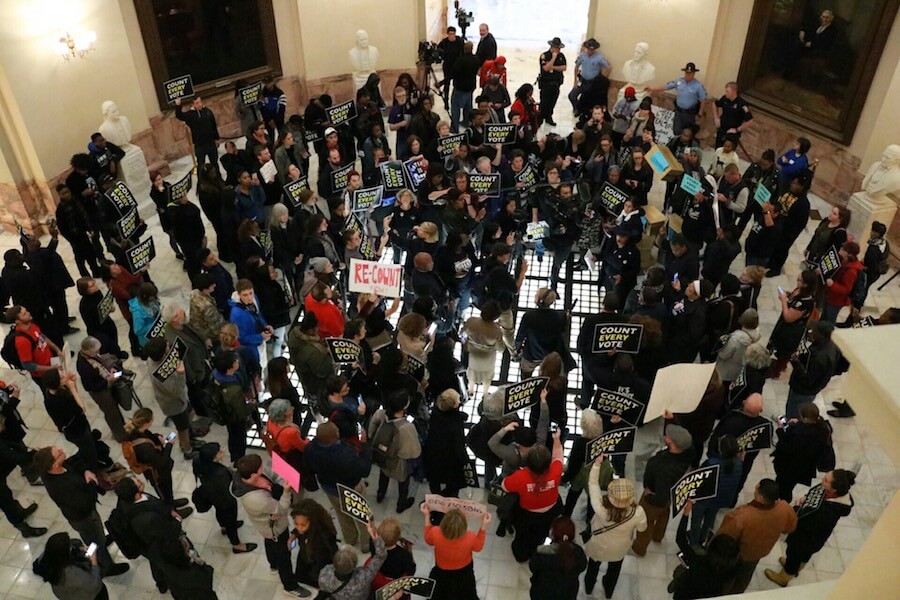 Even before election day, activists say that Kemp—who served as the Georgia Secretary of State under incumbent Gov. Nathan Deal—purged “over 1.5 million voters from the rolls” between the years of 2012 and 2016.

That’s twice the number of voters removed from registration lists during the previous four years.

While Kemp accused Abrams’ camp of “faking outrage” over concerns about widespread voter disenfranchisement to further her gubernatorial ambitions, there was enough criticism over the conservative’s lack of partiality that former President Jimmy Carter called upon him to recuse himself from the Georgia Secretary of State’s office.

Kemp did not do so. Instead the Republican announced his resignation from the position seven days ago, after he alleged a “clear and convincing victory” in the election.

The 55-year-old leads by just over one percent at publication time.

Activists claimed that giving Georgians confidence that the election results are an accurate reflection of their votes is particularly important to the LGBTQ community and people of color, who are more likely to face widespread disenfranchisement and voter suppression.

These same populations, however, also turned out in record numbers this year. More voters identified as LGBTQ in the 2018 midterms than any previous election in history.

“I think that the LGBTQ community is fired up because we know that these issues affect our lives,” Brooks claimed. “These are life and death issues: the right to choose who we love; the right to safe, affordable healthcare; and the right to not have the police and jails intervene in our lives.”

“We want to continue to organize so that all of our communities have the access to vote and to make our voices heard,” she added.

Stacey Abrams’ campaign responded to the arrests of LGBTQ activists by Georgia State Capitol Police in an email.

“The Abrams for Governor campaign stands in solidarity with voters calling on the Secretary of State’s office to count every vote,” campaign manager Lauren Groh-Wargo told INTO. “Since the beginning of our campaign, we have reached out to communities that have been left out and left behind by political leadership in Georgia and asked them to make their voices heard at the ballot box.”

“Our campaign remains committed to uplifting those voices and the voices of all Georgians by ensuring that every eligible ballot cast is counted,” she said.