Nothing could have prepared Jeromy Manke for the scene that awaited him at Reno’s LGBTQ center last Tuesday.

Manke had just gotten home from work when he received a call that OUR Center, where he has served as president for almost two years, was targeted in a terrifying act of vandalism. A masked assailant threw a series of rocks through the Nevada community center’s windows at 7pm that evening, blades of glass scattering throughout the lobby.

Word initially spread on social media that the stones, which the perpetrator picked up from the planter in front of the building, were gunfire.

After rushing down to the center, Manke says he was in “disbelief.” 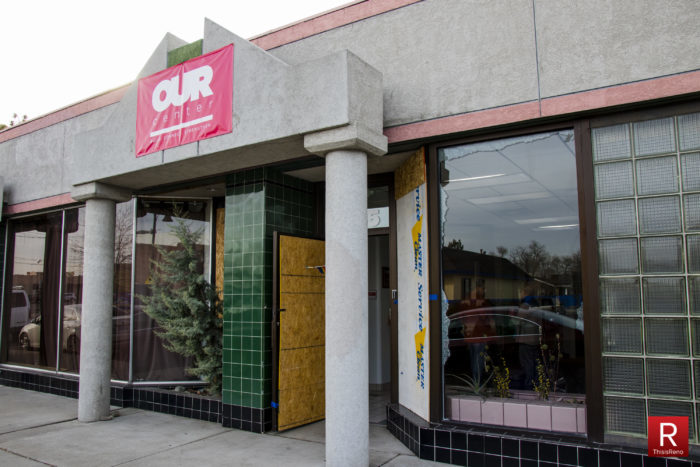 “I was expecting a rock thrown through the window,” he tells INTO. “When I got there, all the windows in the front had been shattered along with the door. To have something like this happen, you can prepare for it mentally, but I don’t think you’re ready for it when you’re actually put in the situation.”

The incident is just the latest in a wave of assaults on LGBTQ centers in the past year, as vandals have targeted a dozen advocacy organizations in states like California, Florida, Wisconsin, New Jersey, and the District of Columbia.

Oklahoma has been the site of three separate attacks since late 2016the most recent of which took place just weeks ago.

But what makes the incident so shocking for Reno’s LGBTQ population is that it’s totally unprecedented. Manke says Northern Nevada has never experienced such a direct strike on its queer and trans community before. As a native of the town which bills itself as “The Biggest Little City in the World,” he claims LGBTQ people “feel relatively comfortable here.”

“It feels like an attack on the community because we are so close knit and that’s a central meeting place for us,” Manke says in a phone interview.

Although many of the previous centers targeted by vandals were desecrated after hours, OUR Center was open during Tuesday’s attack. Patrick Kelly, who works as a front desk volunteer at the center, says six to seven people were attending a weekly Alcoholics Anonymous meeting. In total, he estimates that between 15 and 20 people total were in the building at the time. 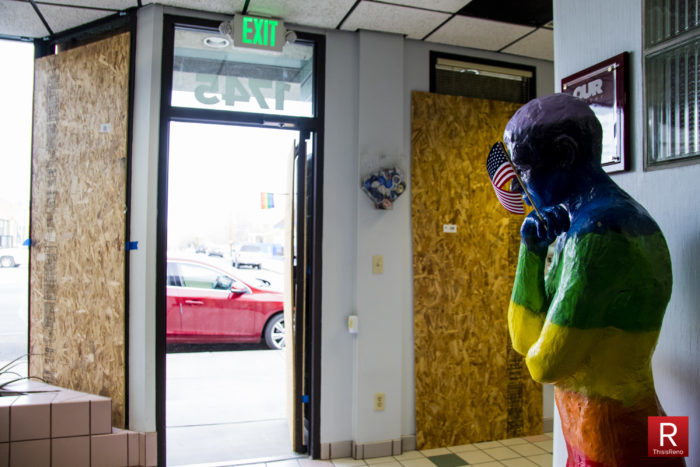 “Nobody got hurt, but people were frightened,” Kelly says. He adds that the center spent “a few hours” cleaning up all the glass.

But there’s been an unexpected silver lining as the LGBTQ community continues to sweep away the debris: OUR Center has received an outpouring of support from local allies in the days since news broke of the vandalism. Manke says the mayor, city manager, and members of the city council have reached out to offer condolences and even financial support.

When INTO spoke with the organization Thursday, more than 30 people had chipped in to help pay for repairs. A group of organizers met at the center the previous evening to plan the January women’s march, and half brought contributions with them.

One of the organization’s prominent donors even volunteered to pay for the damages himself.

“We’re insured so it’s just a deductible that needs to be covered, but you never know how much these things are going to cost,” Kelly says. “It was amazing that somebody just offered.”

Local law enforcement is currently looking into the incident, which has not yet been classified as a hate crime. Tim Broadway, a spokesperson for the Reno Police Department, told members of the press that it is being investigated for the time being as a “destruction of property.” 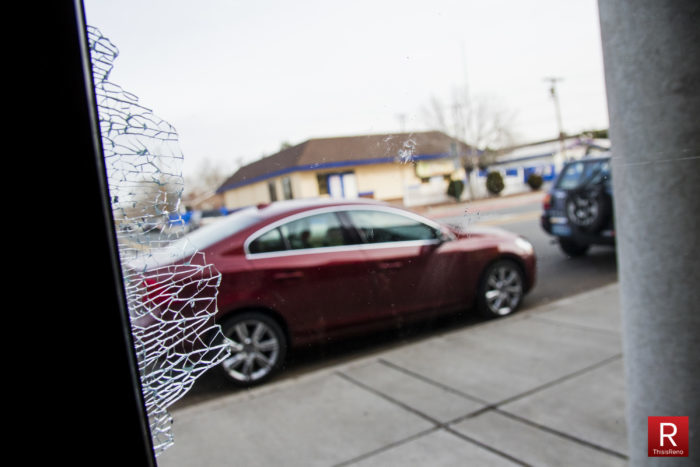 The center’s staff say they agree with that decision: Without knowing who was responsible, it’s difficult to know what was going through his mind at the time of the attack.

While police hunt for the man behind the mask, OUR Center has treated this week’s events like “business as usual,” Kelly claims. The center was already open the next day, a piece of plywood where the windows used to be.

A theater group had rented out the space for a children’s day camp for the next two weeks, and it went on as scheduled on Wednesday and Thursday. Although the facilitators brought campers in through the back door, the kids were curious to see what happened. Kelly says that the adults gave them a tour of “the scene of the crime.”

Manke believes the most important thing that Reno’s LGBTQ community can do right now is simply persist.

“[This incident] shows the work we need to do and how crucial our mission is to promote the acceptance of LGBTQ people,” he says. “We’re all shaken up a little bit, but we’ve received a fantastic outpouring of support from the community and from the city overall. Because of that, it’s helped to lift our spirits and help us stay focused on putting things back together.”