Riverview’s Metro City Church charged $200 for six sessions at The Unashamed Identity Workshop, which was geared toward girls (or trans people who were assigned female) between 12 and 16 years old. The workshop was advertised on the Metro City Church website, where it was then screenshooted andshared widely. 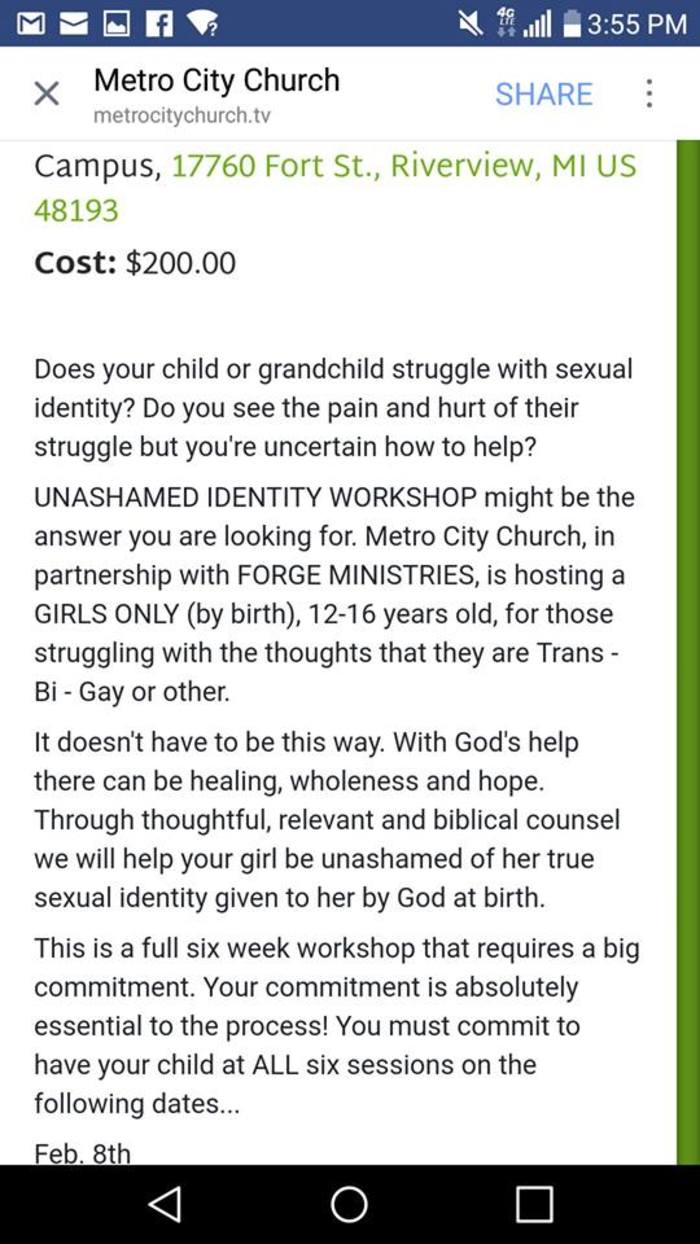 Conversion therapy (also known as reparative therapy or reorientation) has been outlawed in only nine states so far, despite being condemned by the American Psychiatric Association as unethical and unscientific. Michigan currently does not have any legislation banning these pseudoscientific attempts to change a person’s gender or sexual orientation–but the Detroit Metro LGBTQ population is seeking to fix that with their campaign to become “the 10th state.

In a video addressing the accusations, Pastor Jeremy Schossau referred to this workshop as a “conversation” and denied that he was practicing conversion therapy. He stated belief that sexuality is a choice and said the attendees were willingly participating due to discomfort with their feelings. INTO reached out to the church for comment, but was told to refer toShossau’s video, now only available on YouTube. The church’sFacebook page has since been deleted.

Schossau said the workshop would commence despite the backlash, but quietly changed the location from the Riverview campus located on Fort street, to the Taylor campus about five miles away. Despite news of the switch, the bulk of protesters still went to the Riverview campus, hoping to make a statement for city locals and church attendees.

At six o’clock on Feb. 8, around 300 LGBTQ people and allies gathered on a snowy sidewalk outside Riverview’s Metro City Church, braving the frigid cold with rainbow flags, cheers, and signs strung with fairy lights so their bold messages could be seen by the passing cars. People brought hand warmers and coffee to share, and Brianna Kingsley, the Metro-Detroit Political Action Network activist who organized the protest, walked up and down the length of the street yelling motivational chants through a crackling megaphone. It was a joyful gathering of support and love in the midst of our community’s despair. 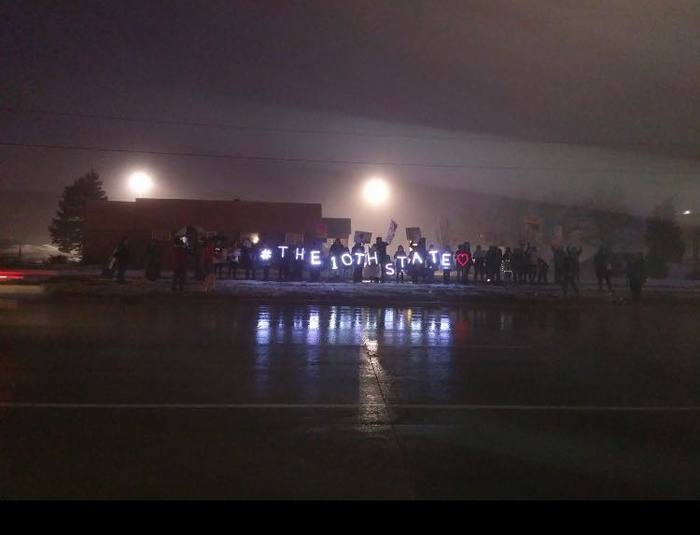 About an hour in, protesters created a circle on the lawn of the church, witnessing the passion and pain of volunteer speakers as they stepped into the circle to give sometimes tearful testimonies of their encounters with homophobia and transphobia, and how that related to Metro City Church’s message that LGBTQ people need fixing. Among those were Seth Tooley and Abby Wessels, two trans people who sought involvement in Christian communities, but were met with lies and rejection.

Tooley tells INTO Shossau once attempted to cast the “demon of homosexuality” out of him.

“I didn’t come out as trans,” Tooley says. A member from the church requested his birth certificate, citing altruistic intentions, but when the congregation found out that Tooley was trans, the tone changed.

“We went to church the next week and were forced to leave,” Tooley says. He recounts a counseling session with Pastor Schossau, where his mother was asked to leave the room so the church team could, without her permission, attempt to pray the gay out of him.

“I was terrified,” Tooley says. I didn’t sleep in my own bed for almost a year.”

Wessels, who runs a podcast called Diary of a Trans Woman, recalls being involved in youth groups all her life, both as a listener and a leader. Anti-LGBTQ messages were the norm, and discussions on converting gay and trans people were treated as casual conversation rather than a potential death sentence. She describes a faith healing that she witnessed in 2007.

“Long story short: she hurt, we prayed, she was healed, and my life changed massively,” Wessels says. She went on to say that shebuilt her faith around this work of God, only to find out nine years later that it had been staged.

“That’s the day I lost my faith,” she says. “I realized that I was [using a lie] to manipulate the lives of thousands of kids.”

The effects of homophobic and queerphobic bullying are devastating. Nearly one third of LGBTQ youth have attempted suicide, and people who have survived conversion therapy are nearly nine times more likely than their peers to have suicidal ideation. By contrast, rates of self-harming behavior drop severely when LGBTQ people have acceptance and support from their family.

Wessels arguesparents should hold as much blame as the pastors, if not more.

“No 13-year-old girl is bringing $200 to her parents saying, ‘Here, can I do this?’” Wessels says. “These are parents paying to have someone fix their kid.”

The day after the protest, a glimmer of light shines through the dark clouds hovering over Michigan’s LGBTQ population. A bill was proposed in response to the controversy, stating that it would ban medical professionals from practicing conversion therapy on minors. HB-5550 would only prohibit the practice of conversion therapy by mental health workers, however, which raises concerns over whether Pastor Schosseu’s workshop will be at all inhibited. 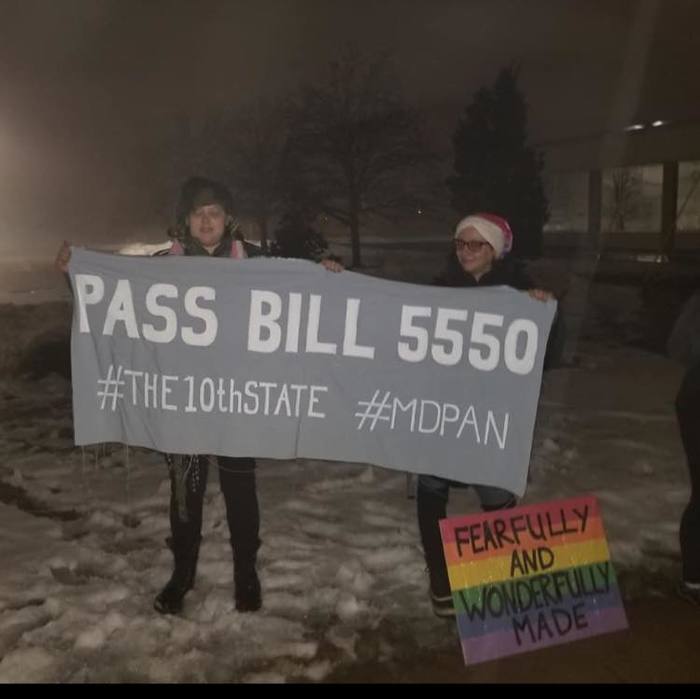 “Mental health professionals [are regulated] through the Department of Licensing and Regulatory Affairs,” says Kingsley, who is spearheading the effort to get HB-5550 passed. “The Consumer Protection Act can currently be applied to unlicensed counselors/pastors who charge a fee for the service of changing sexuality.”

State Representatives Darrin Camilleri (D-Brownstown Twp.) and Adam Zemke (D-Ann Arbor) have called for an investigation into the legality of this workshop. Kingsley says that activists will push Attorney General Schutte to follow through on that request.

“[It] brings the issue to light,” Kingsley says. She documents her continued efforts through her Facebook page, Pass House Bill 5550 – Ban Conversion Therapy In Michigan, where she uses the hashtags #The10thState and #bornperfect to send messages to supporters and victims alike. Kingsley, Tooley, and many others plan to protest every night of the workshop until their message is heard.

“I feel very empowered and courageous,” Tooley says. He credits his mother for her support. “Without her love,” he continues, “I don’t know who I would be.”

For Wessels, material gestures of solidarity are more important than online messages. She came to the protest already empowered and unwavering in her stance. Persistence and doggedness are a must if Michigan is going to become #The10thState to ban conversion therapy. The gay, trans, and questioning children of Riverview Metro City Church and everywhere else are counting on the message that they are #bornperfect and don’t need to be fixed.

“It’s important,” Wessels says, “to give the kids hope.”