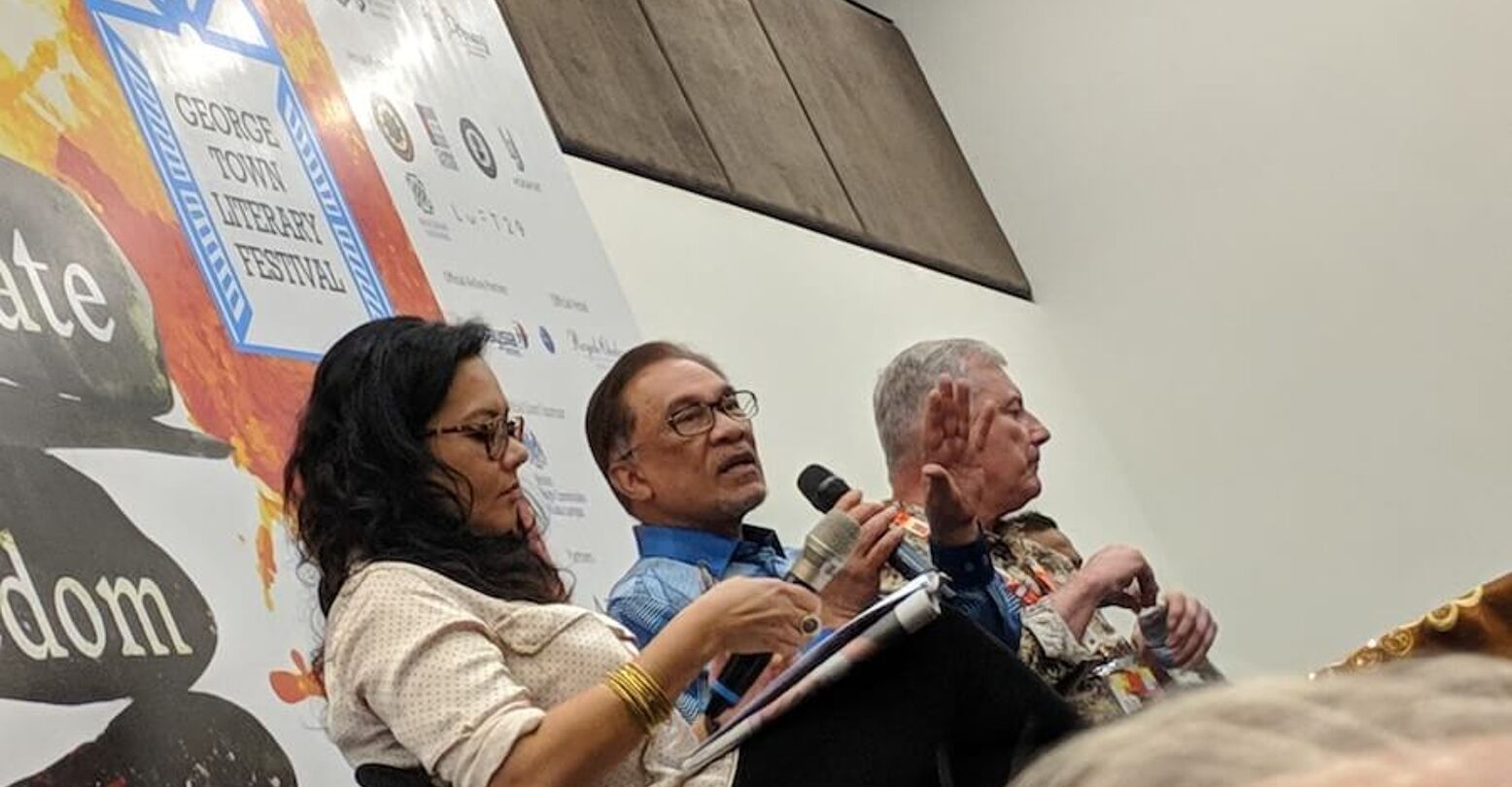 The room was flanked by guards at Malaysia’s George Town Literary Festival on Saturday. But this time the stoic militiamen—volunteers attired in matching green and yellow camouflage jumpsuits—were on the organizers’ side.

Anwar Ibrahim, introduced as the prime minister in waiting, addressed a packed crowd at the annual Penang festival just months after portraits of LGBTQ activists were removed from an art exhibition on the island. In the photos, notable Malaysian figures posed with the country’s flag. Celebrated trans rights advocate Nisha Ayub stood with the banner bundled in her clenched fists, her gaze penetrating and determined.

Even more controversially, activist Pang Khee Teik—also a co-curator and moderator at GTLF—held a rainbow Pride flag in his picture.

After ordering the photos taken down, Islamic Affairs Minister Mujahid Yusof Rawa accused the subjects of seeking to promote the LGBTQ agenda, referring to the acceptance of queer and trans people as “against the society norms.”

“When you put the picture with the [Pride] symbol, if that is not promotion… then tell me what is the definition of promotion?” he told The Star newspaper.

Anwar did not address the controversy, but its specter loomed large during the discussion, which often turned to the subject of LGBTQ rights. It’s a somewhat personal issue for the 71-year-old opposition leader: He has been jailed twice under the country’s colonial-era sodomy laws, which sentence same-sex intercourse with a penalty of up to 20 years imprisonment.

In total, Anwar has spent 11 years behind bars.

The politician, who is widely positioned as Malaysia’s next prime minister when Mahathir Mohamad steps down in two years’ time, again denied the charges against him. Calling for the anti-sodomy law to be struck down, he told moderator Bernice Chauly the criminal codes are “archaic.”

“The laws are unjust,” he told the rapt audience. “Not only [am I a] victim, but many others can be victims.”

Anwar was prosecuted in 1998 and 2008 on allegations of same-sex intercourse. In the second case, a 24-year-old aide, Mohammad Saiful Bukhari Azlan, initially claimed Anwar had sexually assaulted him before amending the charges to “homosexual conduct by persuasion.”

The accused was found guilty in both cases.

Chauly quoted a recent interview Anwar gave to The Guardian about his repeated imprisonment, much of which was spent in solitary confinement: “When it is denied to you, freedom is a torture and also a reason for survival.”

“What was your day like?” she asked Anwar of spending more than a decade in a small cell. “What did you do?

Anwar described it as “not a bed of roses.”

“It’s a very tough experience,” he said. “You need to be strong willed, you have a strong sense of conviction of what you believe in. … If you understand that this is against the system, which is blatantly unjust, you realize that it’s not going to be easy.”

Should he take over in 2020, Anwar’s ascension to the seat of prime minister is viewed by many as a fulfillment of the Reformasi protest movement. Kicked off in 1998 by Anwar’s first imprisonment, the generational struggle against widespread corruption— particularly under ousted PM Najib Razak’s government—led to a “blue wave” in Malaysia’s May elections.

The new leaders promised to bring economic and political reform in a country facing widespread poverty among its most marginalized.

For instance, a 2017 study conducted by UNICEF found that 99.7 percent of children living in low-cost housing in Kuala Lumpur are impoverished, while seven percent live in absolute poverty. Fifteen percent of those children are underweight and 22 percent have experienced stunted growth due to malnourishment.

According to Chauly, even many university students are “literally starving,” eating plain white rice to stave off hunger.

The reformation’s promise remains unfulfilled for many of Malaysia’s communities. Since taking power six months ago, Mahathir’s administration has continued the legacy of its forebears by routinely targeting queer and trans people for abuse. In September, the prime minister referred to LGBTQ rights as “Western values.”

A month later, Mujahid Yusof Rawa—the same minister who censored LGBTQ portraits in Penang—announced the government would be releasing “Guide for Self Migration,” a self-help book for queer and trans people. Geared toward “treatment and rehabilitation,” the conversion therapy how-to manual is currently available for download in the Google Play store.

Chauly asked Anwar a question that’s been much on the minds of LGBTQ Malaysians still waiting for their government to change: “Are you going to let us down?” 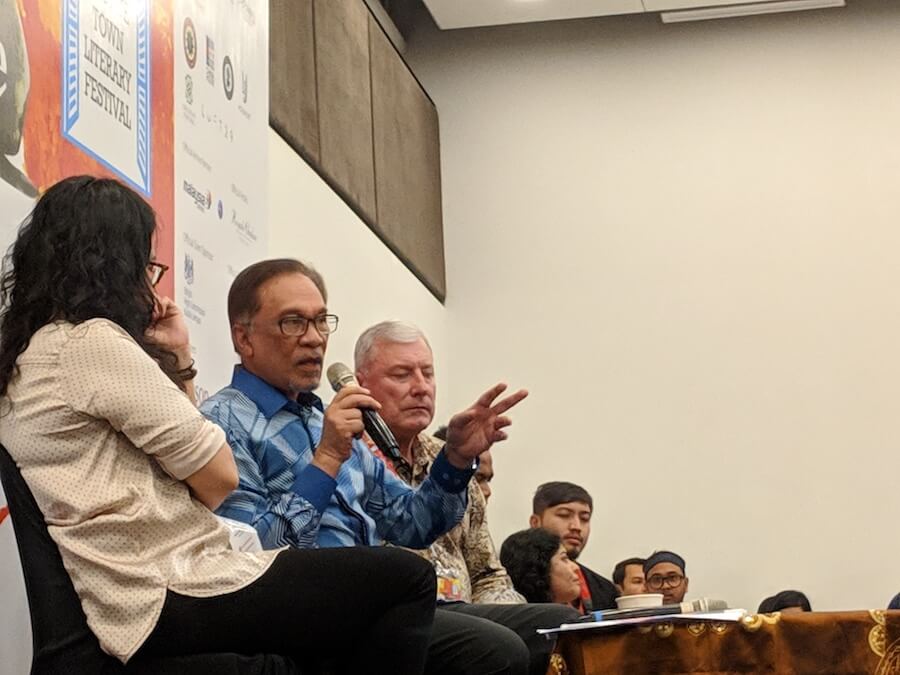 The question was clearly a painful one in an audience overflowing with hundreds of writers, academics, journalists, human rights advocates, and LGBTQ activists. Held in a conference room optimistically titled “Heaven,” demand for the talk was so high that festival organizers told attendees who managed to snag a seat that if they got up to go to the bathroom, they would have to go back to the end of the line.

Many others, like this reporter, crowded on the floor in front of the stage—knees buried in their chests.

While the audience was gravely quiet for most of the 55-minute conversation, half applauded Chauly’s question. The remainder released an anguished cry between a gasp and a sigh.

“I don’t question one’s sexual orientation,” Anwar said of his approach to LGBTQ rights. “I’ve called publicly for the revision of the laws because I consider them archaic and they could be used against people. To the extent that you are a political leader in Malaysia, I’ve gone to the very maximum.”

A young student wearing round glasses whispered that he hadn’t exactly told Chauly what she wanted to know. “He’s talking around the question,” she said, bundled next to the stage in a mass of bodies.

Throughout the talk, Anwar framed his criticism of the sodomy law not as a question regarding the inherent worth of the LGBTQ community but whether it could be used to target “innocent” people. The idea that someone who had engaged in homosexual intercourse could also be innocent did not factor into the discussion.

Mark Trowell, who wrote a book on the Anwar trials, further underlined this point by appearing as a character witness on the politician’s behalf.

Referring to the second conviction, Trowell called the trial a “disgrace.”

“Can I just say this?” asked the author and attorney. “Because the question most often asked of me—particularly because I’m a lawyer—is: ‘Is Anwar Ibrahim guilty of that offense?’ I can tell you no, and I can tell you that based not upon my review of the evidence, but because of the evidence.”

“[T]he only word relied upon was that of the complainant,” he added.

When it comes to taking a further step on LGBTQ rights than Anwar’s personal crusade for justice, he warned equality supporters he would have to “draw the line” somewhere.

“There is a limit to what I can say and what I cannot,” Anwar claimed. “You want me to succeed in my political career, but at the same time you expect me to do things that would destroy my political career. So I have to then take positions to be fair to those who have their own views.”

“I think for us as a relatively conservative society, you don’t expect—and cannot expect—something more than that,” he continued.

Not letting Anwar off the hook, Chauly continued to press him on the issue. The festival director asked him if he agrees with his wife, Wan Azizah Wan Ismail, who urged LGBTQ Malaysians to stay in the closet. Speaking with the Malay Mail, she said queer and trans people can coexist peacefully in the majority Muslim nation if they don’t “glamorize” their lifestyle and “practice” it in private.

The deputy prime minister has also called homosexuality “haram” and claimed it’s forbidden for Muslims to support the LGBTQ community.

Despite these comments, Anwar claimed he and his wife are both tolerant of the LGBTQ community. He said the couple strongly condemned the practice of caning after two women in the east Malaysian state of Terengganu were whipped in September for allegedly “attempting to have sex.”

The politician also claimed he spoke out against attacks on LGBTQ people after a group of eight men reportedly beat a transgender woman in August, leaving her in critical condition. Her ribs were broken and spleen punctured.

“I don’t cast aspersions,” Anwar claimed. “I don’t think they should be condemned and, of course, not assaulted.”

Because Anwar showed up an hour late to the event due to flight delays, GTLF was forced to nix a planned Q&A with the soon-to-be PM. Although organizers said the audience would have time for three questions, Chauly fielded them herself to keep the planned schedule of events moving along. Next up was a panel on literature and climate change.

Chauly requested one-word answers, but he gave her five in total. He said Malaysians are “nice, supportive people.” Beaming with obvious relief after a tough line of inquiry, Anwar added that the people admire “his smile.”

Her last question was a bit more pointed, however.

“We lived in a long, felonious darkness for so long,” Chauly remarked of the National Front, a right-wing coalition which had ruled Malaysia from 1974 until losing the May elections in a landslide. “We got used to it. We were embittered without knowing we were embittered. Are we now in the light?”

But given that Anwar’s wife has referred to the charges against him as a “heinous crime,” this reporter would have asked him a different question if given the chance: “Do you believe homosexuality is heinous?”

That question, like many regarding Malaysia’s future, will have to go unanswered for now.