There have been a lot of days where Charlie Craig and David Mullins just wanted to hide away. They’ve spent six years battling the Masterpiece Cakeshop case. The day the Supreme Court ruled against them, they did about 40 media interviews.

“We were devastated,” Mullins told INTO. “We’ve been at this for six years and to have it end the way it did was very disappointing. And it was hard.”

The case dates back to 2012 when Mullins and Craig walked into Masterpiece Cakeshop with Craig’s mom and asked owner Jack Phillips to make them a wedding cake. When Phillips learned the cake would be for the two men, he turned them away, citing his religious beliefs against same-sex marriage.

The Colorado Civil Rights Commission and the Colorado Court of Appeals both ruled in favor of couple. But in a 7-2 ruling on June 4, SCOTUS overturned those rulings, finding the Commission inappropriately dismissed the baker’s religious beliefs as insincere. The narrow win for Phillips means that future cases will likely determine the fate LGBTQ discrimination law.

Craig and Mullins were left to process the strange loss as they walked into a media blitz that day.

“At the very beginning you don’t really understand what the decision means,” said Craig. “You just know if you win or lose and it was a 7-2 [decision]. And knowing those things only and going straight into the media, it was distressing to say the least.”

Over time, their view of the ruling lightened. For one, it left Colorado’s anti-discrimination protections intact. Experts also say it reinforces LGBTQ protections under the law.

That’s because the ruling explicitly states that the law must protect gay people.

“It is a general rule that such [religious] objections do not allow business owners and other actors in the economy and in society to deny protected persons equal access to goods and services under a neutral and generally applicable public accommodations law,”  the Masterpiece decision says.

Earlier this month, an Arizona Court of Appeals cited the Masterpiece ruling in its 3-0 decision against a calligraphy studio seeking exemptions to Phoenix’s anti-discrimination law. The win signals the Masterpiece decision may play out favorably for LGBTQ cases down the line.

For Craig and Mullins, the Arizona decision also means a silver lining within their perceived loss.

“We read about the Arizona decision that happened last week and they cited our case and they used it in a very positive way,” said Craig. “That felt really good to see that already happen in the first week honestly.” 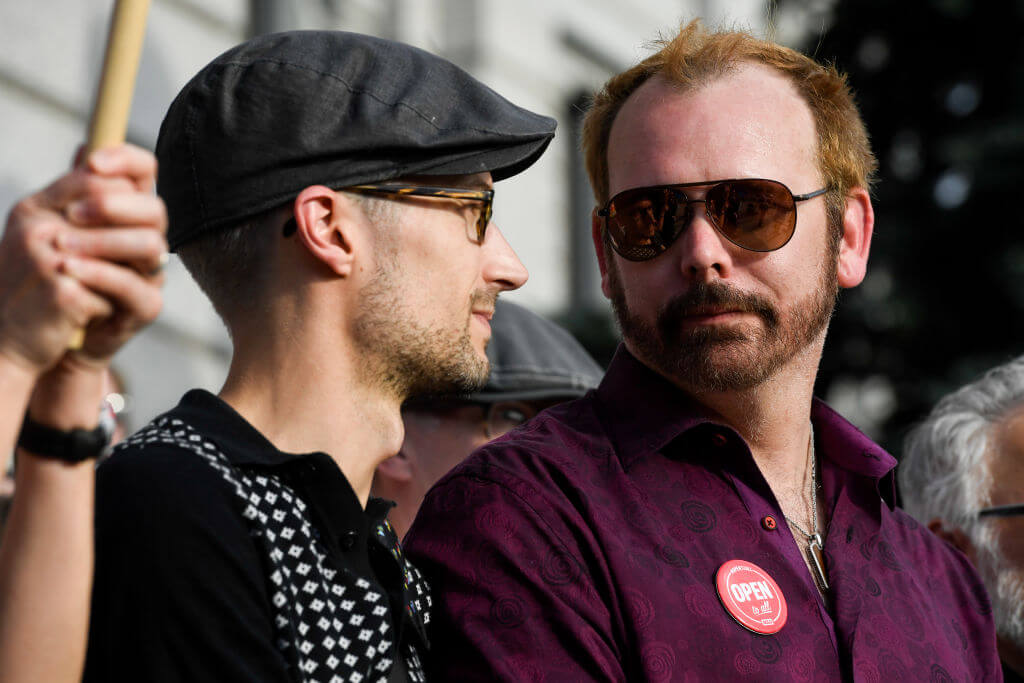 The highly-public road to the Supreme Court has not always been easy for the couple.

Craig says he feels that in walking into the bakery that day, they ended up in “the wrong place at the right time.” The nation was ready to talk about what it means to treat LGBTQ people equally, but Craig and Mullins had to decide to become the public faces of that conversation. Doing so has been really emotional, said Craig.

And given all of that, it might seem reasonable to assume that now that the case is done, so are they.

But their home state of Colorado is one of just 20 with public accommodations protections for LGBTQ people (plus D.C.). According to the Movement Advancement Project, only 47 percent of LGBTQ people live in states with fully inclusive nondiscrimination protections.

Throughout their case, numerous other same-sex couples who experienced anti-LGBTQ discrimination reached out to Craig and Mullins. There was the couple whose day-old child was denied care at the doctor for having parents of the same gender. They heard about a gay man who died at a nursing home and then was denied a memorial because the funeral home didn’t want to serve him.

With that in mind, the couple says they will continue to fight.

Their next push is for the Equality Act, sweeping federal legislation that would add anti-discrimination protections for LGBTQ people to current civil right law.

“Right now is a difficult time politically for LGBTQ people, and in the end, that means it’s just more important than ever that we pull together as a community and continue to push for our rights,” said Mullins.

The Equality Act would amend the Civil Rights Act of 1964, the Fair Housing Act, the Equal Credit Opportunity Act, the Jury Selection and Services Act, among other laws already in place to add protections for LGBTQ people. Those protections would cover the 29 states without laws on the books as well as Wisconsin, which only covers sexual orientation.

Ian Thompson, a legislative representative with the ACLU, said the bill should be a palatable sell to those worried about religious freedom; instead of creating a new law, it simply updates policy in place.

“This is literally just adding in explicit non-discrimination protections based on sexual orientation and gender identity into our nation’s civil rights laws that have been on the books in certain cases for over 50 years,” said Thompson. “So there’s already a very good understanding across the country about these laws.”

Still, their team has no illusions about the difficulty of passing pro-LGBTQ legislation under a Republican-dominated legislature and an administration hostile to queer and trans rights. President Donald Trump has voiced his support for the First Amendment Defense Act (FADA), a sweeping piece of national legislation which would allow people of faith to discriminate against LGBTQ people.

But the couple feels the country is moving in the right direction. When Mullins and Craig filed their complaint with the Colorado Civil Rights Commission six years ago, the couple says they felt like public support was 50/50 for them. Now, two-thirds of Americans say they are against refusals in the name of faith.

“I feel like there’s been a big switch,” said Mullins. “We felt like we really swayed public opinion, and I think in the end that’s what is going to help change Congress.”

Support for the Equality Act is already strong. Its current iteration, which was originally introduced last year, had the largest number of cosponsors (241 in the House and Senate combined) of any pro-LGBTQ bill ever.

“It’s very important to continue to do the work of laying the foundation so that when we do have a more favorable political climate, which could be a lot sooner than a lot of people who have probably thought possible than even just a few years ago, we will be able to move this legislation through the process,” said Thompson.

For Mullins and Craig, it’s a simple matter of justice. It’s not just about justice for them, but for the many couples who came to them with their own stories of discrimination.

“It really means other couples don’t have to go through the same humiliating experience that we went through,” Craig said. “To know that we would be finally protected and we would have a voice and we would have the law on our side, that means everything to us. It’s basically what we’ve been fighting for this whole time.”