A group of homophobic attackers in Australia messed with the wrong drag queens.

Ivy Leaguee, Coco Jumbo, and Vybewho frequently perform on Oxford St. in Sydney’s gay districtwere leaving a gig earlier this month when they encountered a group of men making a ruckus in a nearby kebab shop. After the group was booted out of the establishment by the owner for yelling words like “queer” and “faggot,” the queens tell INTO that the men took it to the street.

A good Samaritan by the name of Ivan Flinn quickly got involved. The 34-year-old IT manager confronted them, saying the gayborhood is no place for that kind of language.

“You can’t disrespect the gay community,” Vybe remembers him saying. “This is a safe space.”

That’s when Vybewhose real name is Angus Robertssays that the hooligans lashed out. The group of men began to pummel Flinn, grabbing his shirt and ripping off his buttons. He was struck in the jaw, which was immediately dislocated by the blow. Flinn would subsequently be sent to the emergency room as a result of his injuries.

Ivy Leaguee, which is the stage name of 26-year-old Luke Karakia, risked her life to intervene. Ivy Leaguee says during a Wednesday interview that she called out the attackers, telling them to come after her instead.

“You’re a tough man for picking on the little guy,” Ivy Leaguee claims she interjected at the time. “Why don’t you try fighting someone your own size?”

The queens argue that the deck was stacked against the attackers all along. Although onlookers might think that a group of club performers in high heels wouldn’t be able to defend themselves, Coco Jumbo (neé Luke Waqa) used to play rugby. She grew up with older brothers. Before becoming a drag queen, Vybe trained as a dancera tradition noted for its athleticism.

According to Ivy Leaguee, the hooligans looked tough but were barely able to defend themselves when challenged. Her wig, however, was ruined when the group of men ripped it from her head.

The trio held off Flinn’s attackers until the police came to break up the fight.

Vybe tells INTO that she was shocked by the violence. Despite a string of 88 murders between the years of 1976 and 2000 that many believe were motivated by anti-LGBTQ animus, she says that Sydney has since become a haven for queer and trans people. The city is the kind of place where people “have each other’s back.”

“This was one of the first attacks in a long time that we have seen or heard about,” Vybe claims. 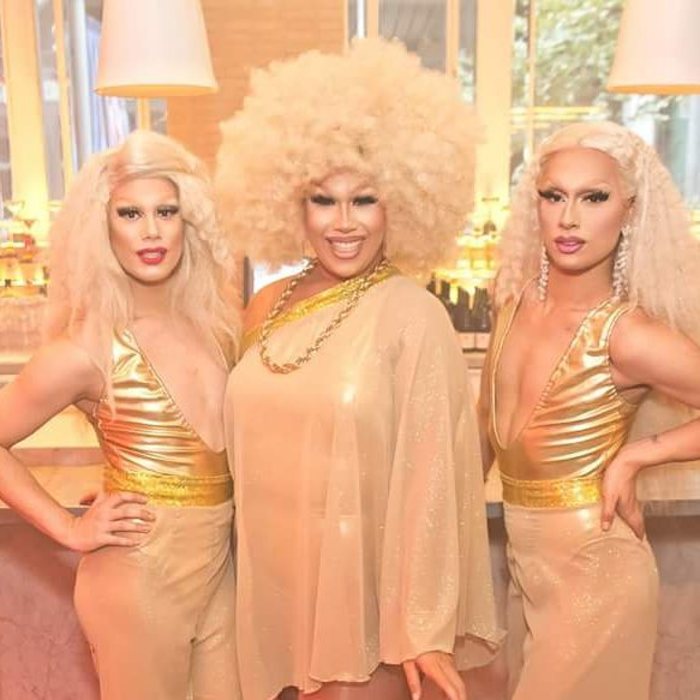 The timing of the incident couldn’t be more germane. Leading up to a nationwide straw poll on marriage equality, posters urging Australians to “stop the fags” have begun appearing in several major cities. The fliers depict two men holding rainbow belts, alleging that same-sex relationships lead to child abuse.

“Ninety-two percent of children raised by gay parents are abused,” reads the poster, which was distributed by an anonymous group. “Fifty-one percent have depression. Seventy-two percent are obese.”

Australia’s PM Malcolm Turnbull condemned the fliers as “abusive” and “disrespectful,” and numerous studies have shown these allegations to be false.

Children raised by same-sex parents are just as likely as their peers to be happy and healthy.
In fact, an in-depth study from the Pediatrics journalwhich was conducted over a 25-year spanshowed that kids reared in lesbian households outperformed other students in school.

LGBTQ advocates in Australia have long warned that putting civil rights up to a public referendum could lead to backlash. Despite the fact that a majority of Australians have supported marriage equality since 2005, Turnbull won’t allow a free vote in the Parliament until a plebiscite is conducteda nonbinding vote of the people.

Shelley Argent, the national spokesperson for PFLAG, warned in a July email sent prior to the plebiscite announcement that it would have a “negative impact” on LGBTQ Australians.

“It is insulting to have your rights put to a popular vote,” Argent said at the time.

The survey has been set for later this monthwith a final count expected on August 24. With tensions escalating on both sides, Vybe claims that it’s a “stressful” time to be LGBTQ: “It feels like in the past year, the world has taken a few steps back.”

But she hopes that the public support the queens have received after the incident inspires the country to come together. Flinn set up a GoFundMe fundraiser to replace the wigs and nails damaged while saving his life. At the time of writing, the campaign has raised over $9,000. The original goal was $1,000.

Ivy Leaguee says that the response has been “incredible.”

“The incident has generated so much love and positivity for the LGBTQ community that people have reached out to tell us we have changed their views,” she claims. “They will be voting ‘yes’ on equality.”

The performers have become a sensation in local media, hailed as “heroes” and “knights in shining sequins.” Flinn has called them his “angels.” But since sharing this experience together, the queens say Flinn has become a friend. Vybe tells INTO that her sisters, longtime pals who live together in a “drag house,” just did what anyone would do in the situation.

“It’s 2017,” Vybe says. “There’s no place for homophobia. Everyone should respect everyone else for being human.”