The day before a neo-Confederate group was set to convene at a Robert E. Lee monument in Richmond, Va., Tyler Smith left a goodbye message for his children. The community was preparing for the worst. The city declared a “Code Red” following the death of 32-year-old Heather Heyer at a similar rally in Charlottesville just weeks earlier. Police told homeowners to remove loose bricks, planters, and anything else that could be used as a weapon.

No matter what happened on Sept. 10, Smith wanted his children to know that he loved them. In a video message, the 32-year-old told them that he didn’t want to leave themhe just needed to stand up and say “No” to hate in his community.

“As much as I wanted to hide, I knew I couldn’t,” Smith tells INTO. “I couldn’t sit aside and let these people ruin this world for my children.”

A group of queer and trans people assembled with over 100 counter protesters in the early hours of Saturday morning. Theodore Kahn, who helped organize the rally’s LGBTQ contingent by spreading the word amongst Facebook friends, handed out medical supplies and waterin case the group was pepper sprayed by police. They discussed what to do in case the event devolved into the violent tumult of Aug. 12, when a car plowed through an anti-racist rally.

“It was pretty scary, but I was also pretty determined not to let confederate yahoos come into our state unchallenged,” Kahn says. 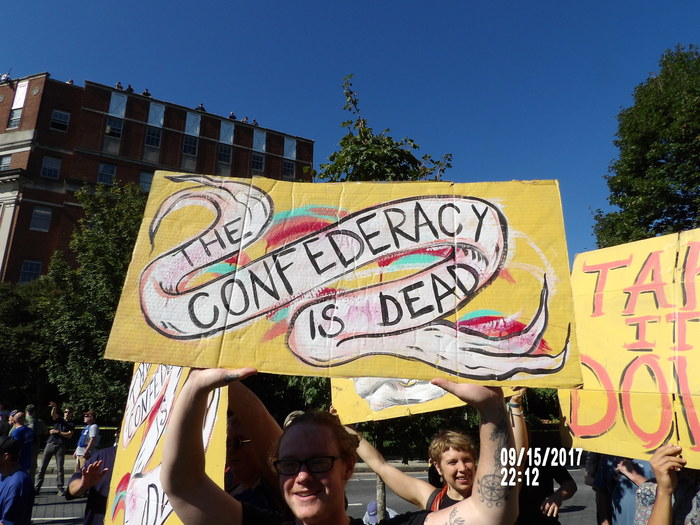 A Facebook event for the “Heritage Not Hate Rally” promised over 100 attendees to protest the possible removal of the Lee statue, which is currently being weighed by Gov. Terry McAuliffe. Less than a dozen members of CSA II: The New Confederate States of America, the out-of-town group behind the rally, actually showed up.

The pro-Confederate delegation was vastly outnumbered, shouted down by hordes of protesters screaming, “Racists go home!” The rally was scheduled to last until 6 p.m., but police escorted the five or so group members away before noon.

When the CSA II supporters tried to leave, they found their tires had been slashed.

LGBTQ people at the center of the protest tell INTO that the rally sent a crucial message to white supremacists in the embattled state: There are more people on the side of inclusion than hate.

The violence in Charlottesville hit close to home for Luna Brown, the child of interracial parents. Her mother is white, and her father is black. When her parents tried to get married in the 1980s in Alabama, they were turned away three timesincluding by a Navy chaplain who declined to officiate the service. A friend eventually recommended a black church that would accommodate. 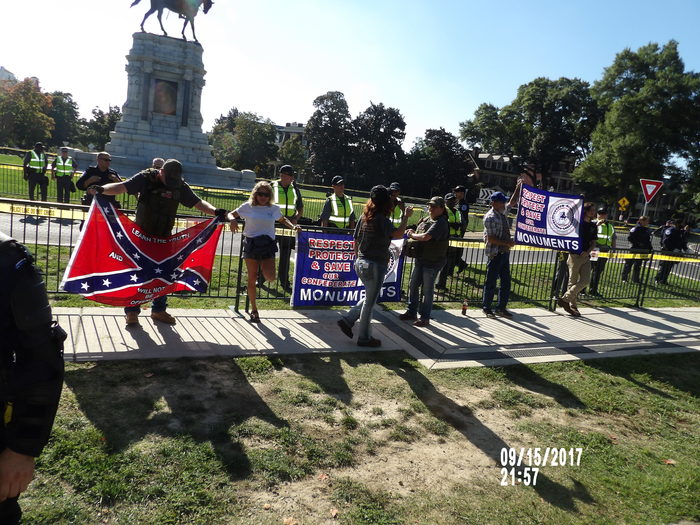 But the couple experienced harassment long before their wedding day. After they became engaged, her mother was stalked by Klansmen, who would follow the undergrad to her classes. To ensure that she was able to get home safely to her dorm at night, she had to be escorted.

“What was going on then is still going on now,” says Brown, who identifies as pansexual. “My parents did not fight for their right to be together just for it to happen again.”

The attack on anti-racist protesters in July likewise felt all too familiar for Kahn. As a young Jewish kid growing up in Richmond, his local synagogue was vandalized. The culprits spray-painted anti-Semitic slurs and swastikas on the outside of the building, broke through the congregation’s windows, and destroyed sacred scrolls that belonged to the rabbis.

The 32-year-old claims that the Charlottesville incident had the same impactof realizing that a space you once thought was safe suddenly isn’t.

“It feels like the boogeyman is real and he’s now in your backyard,” Kahn says.

But the group felt as though they had a responsibility as LGBTQ people to help marginalized groups take back their state after white supremacy came home to roost in what was once the capital of the Confederacy. Kahn, who is transgender, says that queer and trans communities understand what it’s like to have their rights threatened. In January, he was among those protesting the introduction of a bathroom bill in the Virginia legislature.

Although white supremacy isn’t explicitly anti-LGBTQ, Kahn claims that these groups attract followers who don’t believe people like him “have a right to exist.” Charlottesville attendees reportedly screamed homophobic slurs at counter-protesters.

“They view us the same way that they view people of color: We’re the enemy,” Brown adds.

Despite the fear that history would repeat itself, the LGBTQ people who showed up that morning say that they were “excited” to be a part of the solution. Counter-protesters handed out white roses to passersby; the paper flowers paid tribute to the resistance movement in Nazi Germany that opposed the Third Reich. Although a small handful of people were arrested, the scene was civiland even peaceful. 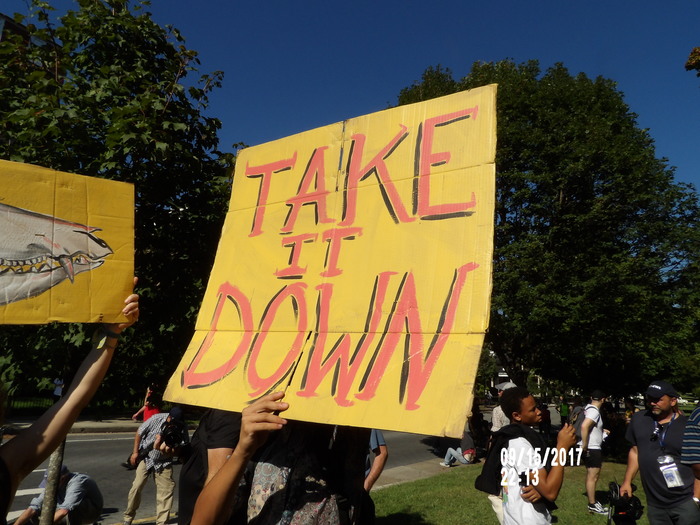 Kahn compares that day to taking on the middle school bully with all your friends: He might be strong, but together you are stronger.

But those that attended the Richmond event say the most impactful part of the day was what happened after the white supremacists were chased away. The counter-protesters stayed and conversed with each other, often having discussions that traversed ideological divides. During the rally, Smith protested next to a man who believes that the city should keep the Confederate statueseven though he agrees white supremacy is wrong.

“I think that many people have always thought this way or it’s how their parents thought, so it’s just a part of them,” says Smith, who is transgender. “Nobody has ever taken the time to sit them down and explain, ‘This is what’s going on, and this is why what you’re doing is hurtful.’”

“It was nice to see people with different ideologies having these important conversations,” he adds. “It wasn’t violent. It wasn’t a riot. It wasn’t a problem.”

When Smith got home that night, he destroyed the video. He didn’t need it anymore.