A Maryland parent has withdrawn a lawsuit against a trans-inclusive nondiscrimination ordinance which called for a permanent injunction against the policy.

A parent calling herself “Jane Doe” claimed an ordinance passed by Frederick County Public Schools in Frederick, Md. violates her 15-year-old daughter’s “fundamental right to bodily privacy.” The board for Frederick County Public Schools voted in June to allow transgender students at the 67 high schools within its jurisdiction to use the restroom most appropriate to their gender identity. It also mandated that trans students be referred to by their chosen name, rather than the one given to them at birth.

Filed in August, the lawsuit claims that the six-month-old policy allows “students of one sex to enter and use restrooms, locker rooms and shower facilities designated for members of the opposite sex.” Comparing the school board’s decision to “the child cults Soviet Komsomol or Young Pioneers in the failed USSR,” it also claims the ordinance evokes “imagery from the horrors of Nazi death camps.”

The American Civil Liberties Union filed a motion to intervene on behalf of 17-year-old James Van Kuilenburg in October, a trans student who was instrumental in helping enact the policy.

The plaintiffs voluntarily abandoned the suit this week, which will allow the policy to stand. It’s a rare victory for transgender students in a political climate where their hard-won rights are being determinedly dissolved by the current occupant of the Oval Office. Just weeks after Donald Trump took office, the Departments of Education and Justice revoked guidance enacted under the Obama administration which allowed trans students to use locker rooms and bathroom facilities most comfortable for them.

After the White House announced it would be rolling back the Title IX guidance in February, Van Kuilenburg knew something needed to be done. 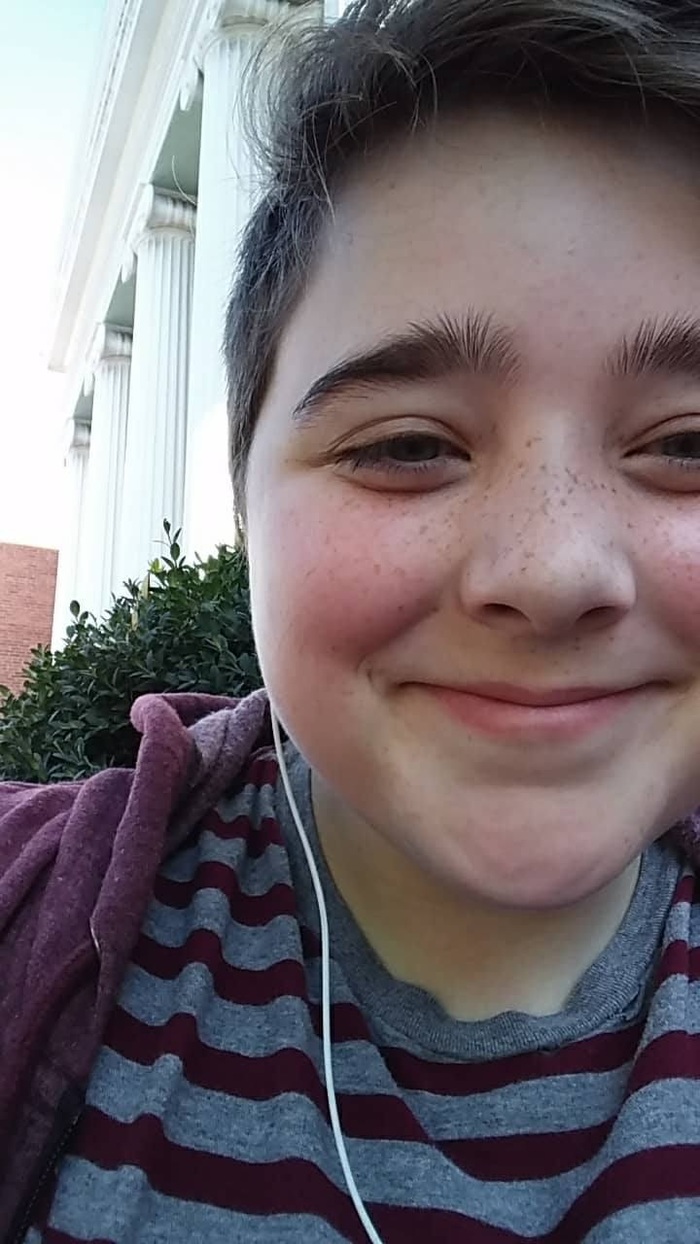 A student at Gov. Thomas Johnson High School in Frederick, Md., the senior transferred from a school in West Virginia at the end of his 8th-grade year. Van Kuilenburg was the only transgender student in his classes, as well as the only out trans student the middle school ever had. The teenager, who came out in 2013, tells INTO that he was treated as an “outcast” by students, faculty, and administrators.

“You already feel alone and you’re figuring stuff out, but then school became such an obstacle for me that I didn’t know what to do,” he says of growing up trans. “I didn’t know anyone else who felt like I did, and I didn’t know how to handle it. It was like nothing I’d ever experienced.”

It wasn’t just that Van Kuilenburg wasn’t permitted to use the restroom with other boys. He wasn’t allowed to go to the bathroom with his fellow students at all. Administrators in the West Virginia school forced him to use a gender-neutral facility in the nurse’s office. If that didn’t already single him out, he was also pulled out of gym class. Staff claimed it was “too complicated,” he says. During that period, Van Kuilenburg had to sit in the computer lab by himself.

While he stresses that he is “no fan of gym,” being all but kicked out of a required course put the middle schooler in an awkward position. When other students asked why he wasn’t in class, Van Kuilenburg didn’t know what to tell them and couldn’t come up with a good excuse. He felt as though he was being forced to out himself.

When his school treated him this way, Van Kuilenburg believed this is what being trans would be like: He would be continually bullied and shunned for who he is.

“It was difficult to deal with that at such a young age because I thought it was setting the tone for what the rest of my life was going to be,” he explains. “You think of school as this model for your future. I thought the way peers and teachers treated me was going to be how it was forever.”

Van Kuilenburg says his new school was an instant improvement over his prior district. Although Frederick County in Western Maryland was one of the few to go for Trump in the 2016 election, the school had trans students before, and administrators were acquainted with the bare minimum standards of acceptance and respect.

But the school automatically assumed that Van Kuilenburg would want to use the nurse’s restroom. That was never an option, his mother says.

“Going to the bathroom at school is such a fundamental thing. If you cannot go to the bathroom, it’s difficult to access education,” Nicola Van Kuilenburg tells INTO. “There was no compromise possible. Singling him out and sending him to the nurse’s room like he was inherently a problemthat was not affirming his identity. That was not allowing him to be the kid that he is.”

Administrators at Thomas Johnson High School would subsequently allow the student to use the men’s restroom, as well as his preferred name and pronouns in school. What troubled Van Kuilenburg, however, was that the school didn’t have a policy on the books which enumerated how it would affirm trans identities. He had a parent who was willing to sit in meetings, advocate for his rights, and get him the protections he deserves, but other students may not be as lucky, especially if they’re not out at home.

Because trans students were handled on a “case-by-case basis,” Van Kuilenburg says that experiences varied wildly across the district. While he attends the “city school,” youth enrolled in more rural, conservative campuses in Frederick County Public Schools deal with an extremely different climate. 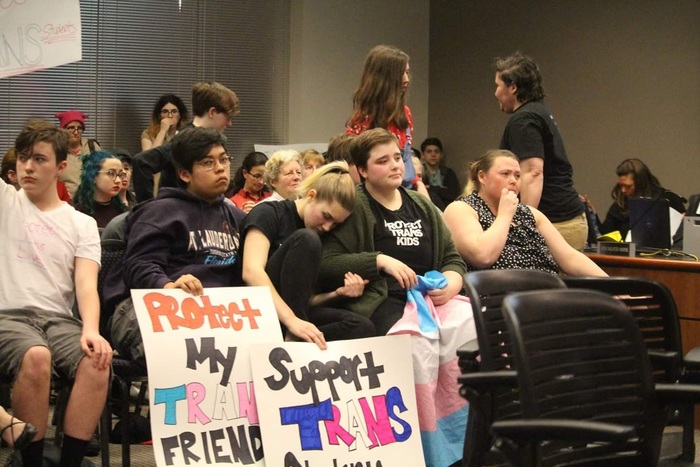 Even for a school where he was largely accepted, Van Kuilenburg claims that the lack of a consistent policy created problems. Not only did students not know what their rights were, faculty didn’t know what was expected of them. And because teachers were given such little information about what it meant to be trans, it meant that the school didn’t know how to handle reports of harassment and bullying targeting its trans population.

The Trump administration’s repeal of protections for transgender youth was a point of no return for students in Frederick County. The few established rights they did have were being taken away, and they had no choice but to do something about it. After attending a school board meeting with 10 other trans classmates, Van Kuilenburg helped launch a full-fledged campaign to lobby for a trans-inclusive policy. Students held rallies, sent emails, and created a Facebook page (called “Support FCPS Trans Students”) to mobilize advocacy in favor of the ordinance.

Teachers and faculty largely supported the policy, which also allowed trans students to play on the sports team they feel is most appropriate for their gender identity. But it was opposed by a vocal group of conservative critics, who claimed at the June meeting to vote on the policy that it would discriminate against other students.

“One of our problems with this policy is it appears to be concerned only with the rights and affirmations of transgender students,” argued Cindy Rose, a representative for the Republican Women of Frederick County, at the time. “Will there be a policy protecting the band geek, the math nerd and the other children who have felt unwelcome and bullied for decades? Will they get a similar carve-out?”

She told the Frederick County Public School Board that the debate boiled down to “whether boys should be able to watch girls undress and vice versa.”

The lawsuit intending to prevent the policy from being enactedeven before it was ever put into effectwas filed less than two months after the board voted 4 to 1 to approve the ordinance. What’s curious about the suit is that the allegedly injured student, who refers to herself as “Mary Smith” (yes, like the Virgin Mary) in court documents, alleges that she was videotaped by a cisgender female student in the bathroom. That footage was subsequently circulated throughout the school, but the incident had nothing to do with trans students. 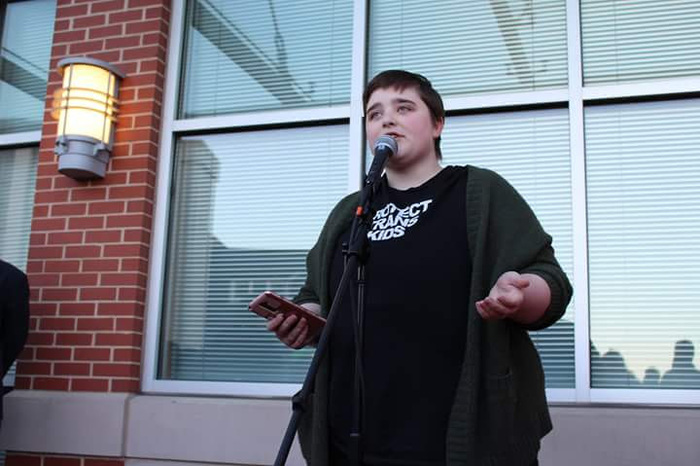 Mary Smith had never even met a classmate who was transgender.

Jennifer Kent, the attorney who represented the Van Kuilenburgs in taking action to halt the suit, tells INTO that the plaintiffs’ claims of harm simply had no merit.

“Cisgender students are not excluded under the policy,” says Kent, who serves as managing attorney for FreeState Justice, an LGBTQ advocacy group in Baltimore. “Their rights are not excluded under the policy. It does a very good job of addressing privacy concerns by addressing non-stigmatizing alternatives while affirming the rights of transgender students to be treated fairly like any other kid and to be safe at school.”

With the suit’s dismissal, the trans-inclusive policy will be allowed to remain in effect.

Even though the policy has only been in place for three months of the school year, Van Kuilenburg says that there’s already been a major culture change within his school. Transgender students feel more comfortable with coming to teachers about the problems they face. When he came to Frederick County four years ago, the district’s trans population felt ignored and silenced. Now they feel like someone is finally listening.

“In school, I have more than a dozen trans friends, and it’s really weird how fast that changed,” Van Kuilenburg says. “It’s so exciting, and it makes me wonder what’s going to happen when I become an adult.”

“All the things I never thought were possible are coming true,” he adds.