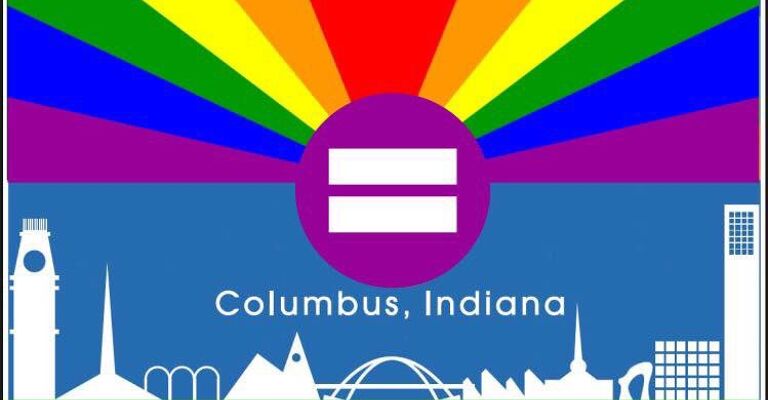 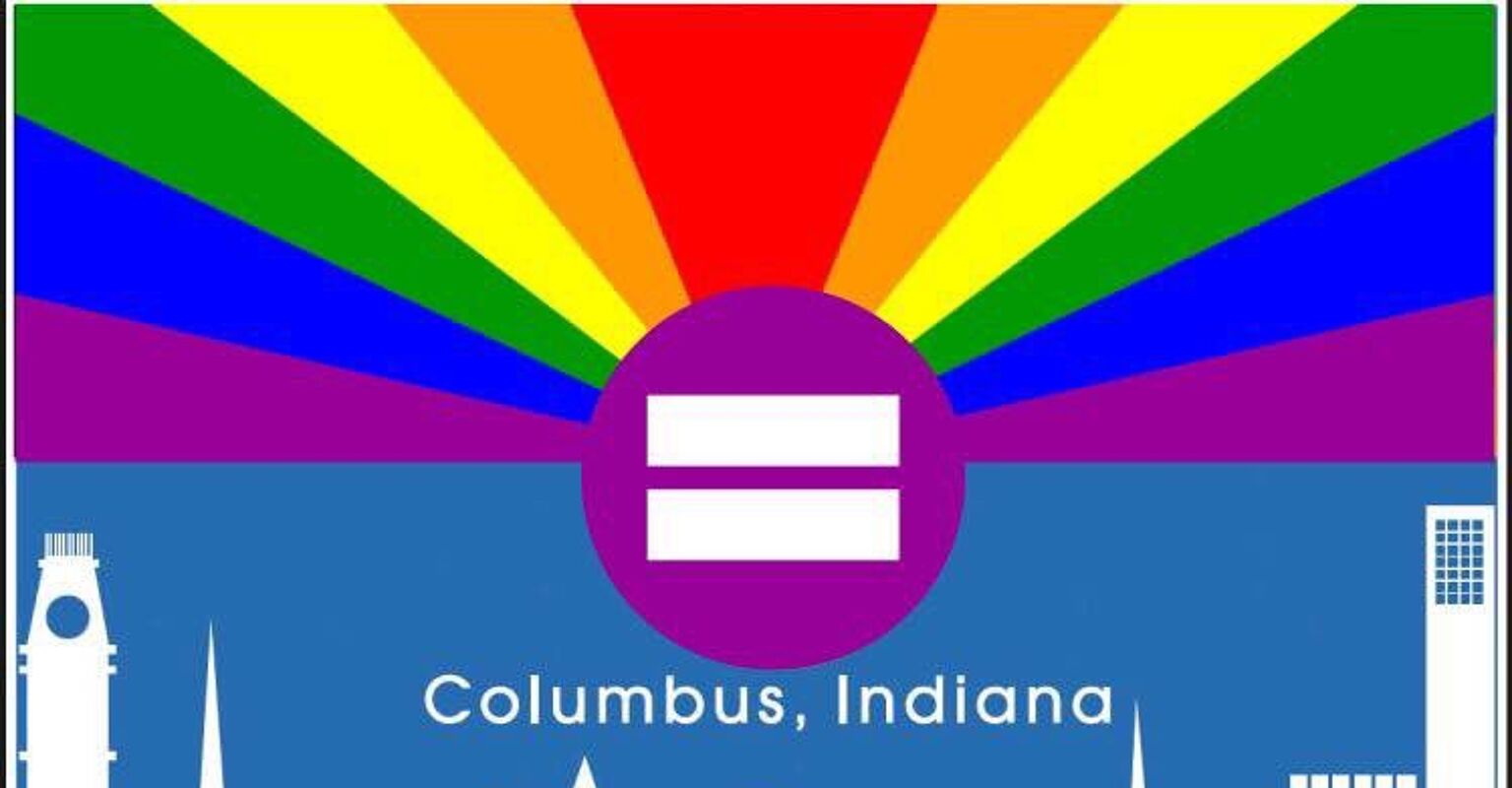 Erin Bailey wants you to know that not everyone in Mike Pence’s hometown shares his anti-LGBTQ views.

Bailey lives in Columbus, an Indiana city located halfway between Indianapolis and Louisville. The town of 50,000 people is a hidden modernist gem, a tourist mecca for lovers of mid-century design. Its striking red brick library, designed by I.M. Pei, was featured heavily in a 2017 indie film which bears the town’s name.

But those who don’t subscribe to Architectural Digest likely know Columbus as the vice president’s birthplace. Pence was born in the picturesque town in 1959 and graduated from Columbus North High School.

The 18-year-old says many people, thus, assume Columbus is a “hick town.” She hopes to change that.

As her high school senior project, Bailey decided to put on the town’s first-ever Pride festival. Scheduled for April 14, the event will feature drag performances, music, and an art show, as well as booths from more than 25 vendors.

“I wanted to make it really big because I felt like in Columbus, we needed that,” Bailey tells INTO in a phone interview. “There’s nothing like that here.”

The student got the idea for the event after attending a queer film festival in neighboring Bloomington, a liberal college town. Although Columbus has a Pride Alliance which organizes LGBTQ events, the group has remained largely inactive in the past few years.

Despite the town’s lack of a visible LGBTQ presenceor even a full-time gay barBailey says Pence’s values don’t reflect the community she knows. The bisexual student has been out to friends since her sophomore year and claims she never had a big coming-out moment with her classmates. Many of her peers just “kind of knew.”

Bailey describes the atmosphere as “welcoming” and “supportive.”

Those two words have rarely ever been used to describe Pence. As the governor of Indiana, the Republican signed a bill into law allowing businesses to discriminate against LGBTQ people. He reportedly played a key role in redrafting President Donald Trump’s ban on trans military service, a policy that was reinstated on Friday after being blocked by at least four federal courts.

Critics say Pence also supported conversion therapy during his 2000 run for Congress. His website urged redirecting HIV/AIDS funding to “institutions which provide assistance to those seeking to change their sexual behavior.”

The conservative denies accusations he supports orientation change efforts, which have been condemned by every leading U.S. medical association.

Local resident Jill Tasker, who also serves as the standing president of Pride Alliance, doesn’t mince words when discussing Pence’s anti-LGBTQ record. Tasker “despises everything that man stands for,” as she tells INTO over the phone.

“I think he is completely wrong,” she says. “He’s on the wrong side of history on everything he believes and espouses.”

Tasker claims that Columbus has always been a bit more progressive than its bucolic environs might suggest. The town was nurtured by industrialist J. Irwin Miller, who marched with Martin Luther King. He was a key player in the founding of Cummins, the town’s largest employer and a champion of LGBTQ issues in the town.

“Nothing like that had ever been done in this town,” she claims. “The mayor came. I mean, everybody came.”

But even as Columbus continues to distinguish itself as a liberal island encircled by a sea of red, ripples of conservatism often find a way of washing ashore. Two years ago the Columbus Board of Works prohibited Pride banners on town light poles in a bid to “encourage tourism.”

As a gay man who prefers a feminine gender expression, Ham likes to wear makeup and heels in his daily life. But even on a progressive college campus, he feels as if he needs to force himself into a closet to survive. When Ham strolls past a group of students while wearing four-inch stilettos, they stare at him and whisper among themselves. Sometimes they giggle.

“It’s that feeling of being judged, not feeling comfortable or safe,” he says. “I feel like I have judgment cast on me, based on the preconceived notion that I’m not ‘normal.’”

Lesbian couple Stephanie Aulick and Alexa Lemley own Artisan Foodworks. As longtime residents of Columbus, they claim a Pride festival is “risky” in an area where Pence’s ideologies are more commonplace than many would like to admit. Bartholomew County voted for Donald Trump in the 2016 election by a 2 to 1 margin.

“I remember there were no lesbians when I was growing up,” Aulick told The Hill earlier this week. “I didn’t know they really existed.”

But even despite the potential backlash, the business has helped support the LGBTQ event by baking rainbow-colored s’mores. Citing the importance of visibility, Aulick says she wants queer young people to “know that there are adults who identify as LGBTQ in their community.”

Thus far, Bailey says there has been extremely little backlash to the event. More vendors reach out to her every day about taking part, and she has considered adding a parade to the agenda because “people keep asking.”

Even Pence has offered his support for Columbus Pride.

“Vice President Pence commends Erin Bailey for her activism and engagement in the civic process,” said the vice president’s press secretary, Alyssa Farah, in a statement. “As a proud Hoosier and Columbus native, he’s heartened to see young people from his hometown getting involved in the political process.”

Tasker says it reminds her of Pence’s response to being booed during a performance of the Tony-winning play Hamilton in New York last year.

“Pence said to his daughter, ‘That’s what freedom sounds like,’” she claims. “He’s not afraid of dissent. He doesn’t react like Trump does. In that way, he’s a grown up. His beliefs are warped, but I think he can be mature about it.”

The vice-president has frequently been trolled in recent weeks for his LGBTQ views. When Pence attended a St. Patrick’s Day parade in Savannah, Ga., the local queer and trans community showed up with Pride flags to photobomb his appearance. Nearly every picture of the Republican has a torrent of rainbow banners in the background.

After Pence released a children’s book starring his pet rabbit, late night host John Oliver released a version with a gay bunny. The spoof actually outsold its source material, landing at no. 1 on Amazon. Even Pence’s daughter bought the gay bunny book.

But what Bailey hopes shines through at next month’s Pride festival is not a message of division. She wants to create a space where people feel welcome.

“I just want everyone to be able to see that no matter where you live, there’s always people like you around and that you’re never alone,” Bailey claims. “No one should be ashamed to be themselves.”