I’m a blubbering mess at the wedding of two people I’ve never even met as the Sydney’s Opera House sails jut out behind them while they read their vows.

Since marriage equality became Australian law in December, same-sex couples had to give a month’s notice before getting hitched, making this week the first they could legally do so.

So after the short wait that followed, grooms, Michael Petchell and Benjamin Gresham are finally able to exchange poignant vows written themselves in a historic ceremony one of Australia’s very first same-sex weddings. And it’s a day the teenage Gresham never would have imagined.

“Thirteen-year-old me really struggled with being gay,” he told INTO during the reception. “If I could’ve seen into the future, seen my smile now and seen how happy my husband makes me, it would’ve removed the difficulties.”

And the difficulties he refers to are not only of his own revolving around his sexuality and coming out. But also referring to the recent fight the entire country faced after a divisive postal survey on marriage equality launched that led to intensified campaigning in recent months, battering Australia’s LGBTQ community. 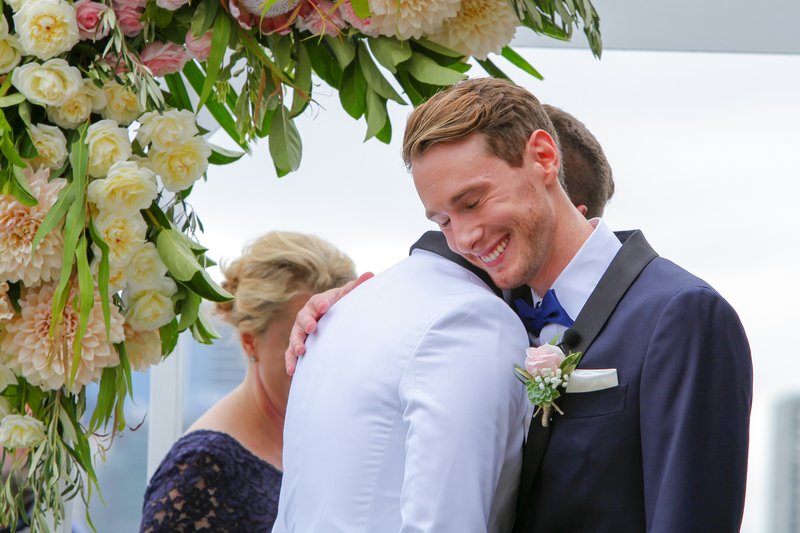 “They fought for this day, copping abuse from people when handing out leaflets at train stations, asking them to vote Yes in the postal survey,” Petchell’s sister, Anna Petchell, who did a reading at the ceremony, told INTO. “They got up at 5am to catch people on their way to work.“They wrote a beautiful letter and handed it out to their Blue Mountains community.”

“It said: We’re your neighbours, just two blokes who love each other.”

During the postal survey, some gay people were devastated to discover their own family members would be voting against them. Not for this couple; their entire families couldn’t be prouderand showed this pride at the ceremony.

Reflecting back on the recent Yes vote that brought the couple to this day, Michael recalls relief and joy as the first emotions to rush in.

“I burst into tears. I didn’t realize how much I must’ve been bottling it up to try to protect my heart, my emotionsand my relationship with Ben,” he said under the warm January sun.

Meaning this day, then, as happy as any wedding, was loaded with an extra layer of profound meaning, which wasn’t lost on Michael: “I knew it was more emotional than just a weddingwhat we were doing was a powerful symbol for so many others.”

History was indeed made. This was the first same-sex wedding underneath Australia’s national icon, the Sydney Harbour Bridgethe same place Michael and Ben shared their first kiss on their first date.

But their special day wasn’t due until the end of 2018. It got brought forward when Michael and Ben won a competition to have their entire $40,000 AUD wedding paid for by media company Eikon and 20 different wedding supplierswhich only allowed them four weeks to plan it.

And while time was not on their side, they still were able to have some fun and took advantage of how gay weddings give one the license to make your own rules, and to be as subversive or traditional as you like. 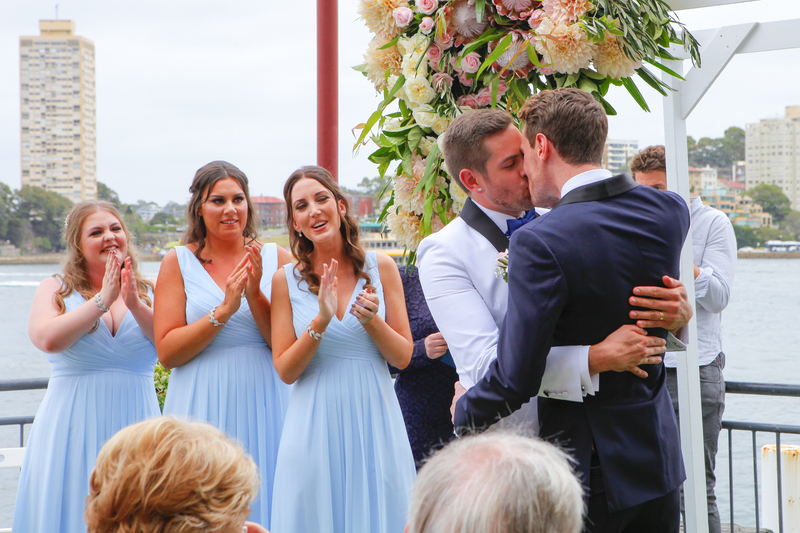 Their mothers walked them down the aisle, after flower girlsscattered it with petals. Each proud mother whispered the warm words of encouragement, as their sons fought back tears. Both husbands-to-be were visibly nervous; the weight of the significance of the day was on their shoulders. So their mothers rubbed their arms and backs lovingly before exchanging their sons’ hands for tissues as the big moment arrived.

The aisle was a long pier, leading to the water’s edge where they meet a registrar whose excited giggles revealed obvious excitement at her role in writing a long-awaited chapter in Australia’s history.

Somewhere Over the Rainbow is sung by a live singer at the ceremonyfittingly in the same week The Wizard of Oz musical production opened Sydney, a city where friends of Dorothy can now walk tall every day, not just during Mardi Gras.

A bible reading by Ben’s sister added some religious tradition to the ceremony. That same book that was used to demean us during the marriage equality debate is today used for its original intended purpose: love. 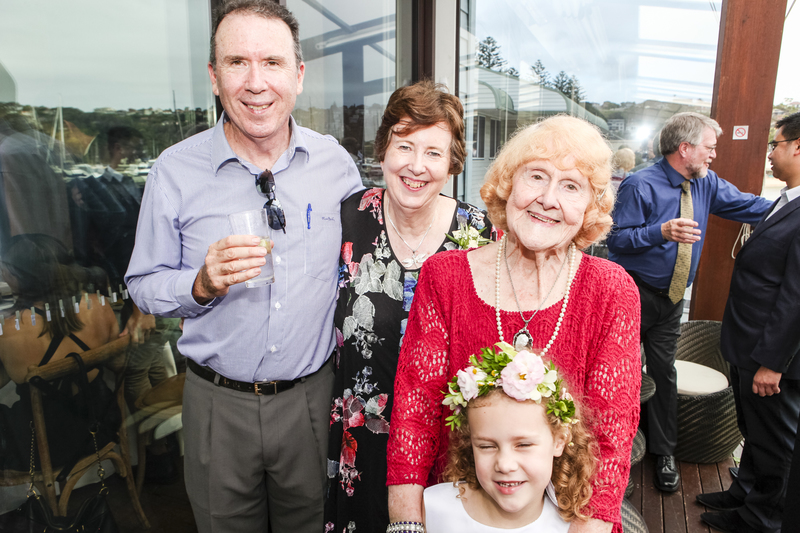 “I was harmed by the church and went through difficulties because of it, but faith is still important to us,” Gresham said. “We don’t believe being gay and Christian are incompatible.”

And for many Australians who may have sat in the pews of those churches and saw the pain inflicted on people like Gresham, but never supported it, today is a form of vindication they, too, never saw coming.

Naomi Gresham, Ben’s 93-year-old Nanna, attends church every Sunday and persuaded everyone there and in her Hunter Valley community to vote Yes to marriage equality.

Having lived through a time when being gay was criminalized, Naomi said she never thought she’d see this day, but always hoped for it. “I never understood ignorance. People are who they are. Nobody should be judged or not respected.”

A huge smile enlivens her face, as she adds “I’m so emotional to see Ben so happy after all the years he’s wanted nothing more than this. I love him so much and I love Michael, tooso I’ve gained another grandson.”

“It’s the loveliest wedding I’ve ever been to,” she said, her smile only brightening.