“I don’t want to believe that this is as good as it gets.”

It was a few weeks before election day and Chris Pappas was running a close race against Republican Eddie Edwards for New Hampshire’s 1st Congressional District. The differences between the two couldn’t have been more acute: Edwards was endorsed by Donald Trump and campaigned with the president’s lawyer, Rudy Giuliani, in the final days of the race.

Pappas, meanwhile, campaigned on a message that’s antithetical to the culture of division he believes Trump has furthered in Washington, D.C. He wants to fix what he calls a “broken system” by making it kinder, more empathetic, and more willing to work with the other side.

“It’s disturbing that we have taken so many important steps forward and yet we’ve been taking some in the opposite direction the past year and a half,” Pappas said over the phone on Oct. 5. “We can’t let the president disrupt our ability to be able to stand up, to make sure that everyone has a voice, and to make sure that people are respected under the law.”

“I’m just really dismayed that we’re in this point right now where after having come so far, we’re now having to fight to hang on to the progress that we’ve made,” he added.

America took a big step toward regaining that progress on Nov. 5. Pappas was one of at least eight openly LGBTQ candidates who won their races for the U.S. House of Representatives. These names include newcomers like California’s Katie Hill, Kansas’ Sharice Davids, and Minnesota’s Angie Craig, all of whom are the first out representatives to hold their respective seats.

During an election that was good to LGBTQ hopefuls, Pappas could be joined in Congress by two more. Gina Ortiz Jones has called for a recount in Texas’s 23rd Congressional District, trailing her Republican opponent by just over 1,000 votes.

Meanwhile, Rep. Kyrsten Sinema leads conservative challenger Martha McSally in a similarly tight race for the U.S. Senate, separated by less than 20,000 votes. Should she eek out victory in Arizona, Sinema would make history for the second time: After becoming the first out bisexual woman in the House of Representatives following her 2013 victory, she would be the just second LGBTQ Senator ever.

On election night, Pappas didn’t emphasize the significance of his victory to LGBTQ people. In a speech delivered to supporters, New Hampshire’s first openly gay Congressman claimed his 8.5-point win over Edwards illustrated that New Hampshire voters are “more kind, more decent, and more tolerant than our political system would let you believe.”

“Voters in New Hampshire and all across the country are delivering a strong message,” he claimed. “When America is faced with a challenge, we don’t give up. We don’t give into fear or anger. We persevere.”

His focus on bipartisanship led some to conclude that Pappas was playing down his sexuality in what’s often referred to as New Hampshire’s “swingiest swing district.” The state could itself be best described as “blue-ish.” Although New Hampshire has voted for Democrats in the past four presidential elections, it’s one of four New England states with Republican governors.

Although the incumbent, Carol Shea-Porter, is a Democrat, President Donald Trump won the First Congressional District by two points in 2016. The district has traded hands between House Republicans and Democrats four times in 12 years.

But Pappas stressed that his campaign message was merely about what he brings to the table, not who he is.

“I’m running for office not to make history but to make a difference for the people of the state,” he said last month, noting that his message focused heavily on issues of healthcare and campaign finance reform. “And that’s where my focus always will be in Congress.”

If Pappas hoped to be judged on his record, it’s clear that voters responded. 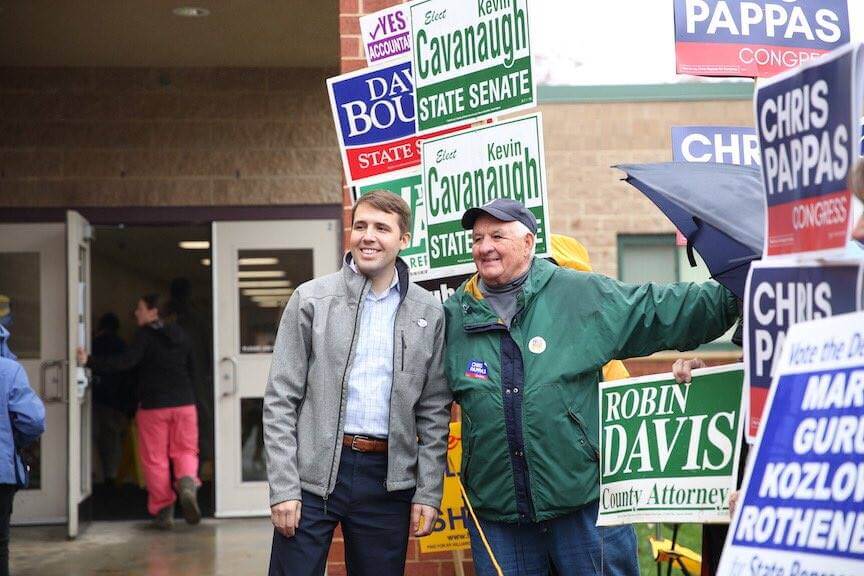 Although he is set to be one of the youngest members of Congress, the 38-year-old already boasts a fairly intimidating resume. He’s served on both the New Hampshire House of Representatives and New Hampshire Executive Council, as well as acting as the treasurer of Concord-adjacent Hillsborough County for four years.

Pappas also runs the Puritan Backroom with his father and brother-in-law, a restaurant that’s been the family business for four generations. His great-grandfather founded the Manchester mainstay in 1917 after emigrating from Greece.

It’s a story so profoundly American that Pappas almost had to run for office. But growing up, he wasn’t sure if public life had room for someone like him.

The candidate got his first taste of politics in 1996, volunteering for Jeanne Shaheen’s successful bid for governor while still in high school. At the time, there were extremely few out elected officials in office. Tammy Baldwin, the first openly LGBTQ person in U.S. Congress, wouldn’t win a seat in the House of Representatives for three more years.

Two decades before the “Rainbow Wave,” Pappas said his home state wasn’t the kind of place “where you saw LGBTQ candidates running for office.”

“I didn’t know one other person that was out and so I didn’t have the confidence to be able to tell people who I was or be honest about who I was—even with my closest friends,” he claimed. “It wasn’t until I got to college that I met other people that were like me and that gave me the assurance that it was OK.”

So while his sexual orientation may not have been a central component of his 2018 stump speech, Pappas emphasized he’s keenly aware of the importance of representation. Throughout the campaign, the representative-elect spoke with voters who were energized about the influx of women, people of color, and LGBTQ candidates at the local and national level.

“People are thankful that there’s a new generation of individuals stepping forward to run for Congress this year—to reinvigorate the system and to put a focus on the issues that matter to them,” Pappas said.

While the brunt of media attention focused on the “Rainbow Wave,” the truth was that all varieties of colors shone through on election day. It was just as much a “Brown Wave,” “Black Wave,” and a “Pink Wave”—a year where women like Ayanna Pressley and Alexandria Ocasio-Cortez dramatically changed what it looks like to run for office in the United States.

On Nov. 5, Rashida Tlaib and Ilhan Omar became the first Muslim women elected to Congress. While Davids is the first queer woman of color in the U.S. House, she’s also one of two Native American candidates tapped the national legislature.

Pappas said what attracted voters to this diverse crop of leaders is “authenticity.”

“They appreciate candidates that are honest about who they are,” he claimed. “Because I think they know that those are the kind of people that they can trust, to be honest when they’re in elected office, to deliver on what they say, and to create action around the priorities of their campaigns.”

As Pappas prepares to head to D.C. next year, a major priority for him will be bringing to the national legislature the lessons he’s learned from decades of creating change in New Hampshire.

High on that wish list will be the passage of the Equality Act.

While New Hampshire is one of 20 states with fully inclusive laws preventing discrimination against LGBTQ people in housing and employment, 30 states lack those basic safeguards. Earlier this year, Gov. Chris Sununu signed legislation updating the 20-year-old state’s nondiscrimination laws to include protections on the basis of gender identity in public accommodations.

If signed into law, the Equality Act would be more than a federal version of the New Hampshire bill. It would protect LGBTQ people in all areas of public life—including credit, federal funding, and the jury system.

Former Speaker of the House Nancy Pelosi promised the comprehensive civil rights bill would be a top priority should Democrats win back the U.S. House. They have more than accomplished that goal. Although many races have yet to be called, liberals could claim as many as 40 seats when all is said and done—the biggest House pickup since the Watergate era.

Although the Equality Act may seem like a pipe dream with a Republican-controlled Senate and Trump still in the Oval Office, Pappas thinks it’s possible. He says it begins with reaching across the aisle, putting aside partisan differences.

“Building relationships with individuals is an important foundation for being able to work with people to make things happen,” he claimed. “I think it’s really critical that we look for ways to talk to one another and not past each other—to create a space where we can have dialogue, even with people with whom we might disagree.”

By building coalitions with others who don’t share our views, Pappas believes America can be decent again.

“We need more of that in Congress — where people relate to one another and get to know each other,” Pappas added. “I think that can provide the basis to be able to see bipartisan action on important issues.”